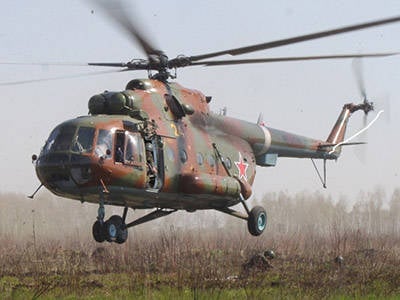 In Khabarovsk completed joint practical exercises separate aviation squadron and special forces of the Eastern Regional Command of the Internal Troops of the Ministry of Internal Affairs of Russia "Typhoon".


The military personnel of the “Typhoon” special detachment of the Eastern Regional Command of the Interior Forces of the Ministry of Internal Affairs of Russia carried out airborne search and attack groups from helicopters, trained in the selection and preparation of helicopter pads, as well as in organizing interaction with the crews of fire support helicopters.

The pilots worked practical actions to search for and destroy the "enemy" by target indications of the aircraft gunner, as well as to evacuate the "wounded" in a mountainous and wooded area.

“The classes are aimed at training the personnel to carry out the upcoming service and combat tasks. Special Forces officers strengthened their practical skills in landing from an aircraft, and the helicopter crews flew and landed an air search assault team, ”said Lieutenant Colonel Igor Gumenyuk, a senior inspector and navigator of the aviation department of the Eastern Regional Command of the Interior Ministry of Russia.