Russia has long justified the betrayal of the Crimean Tatars 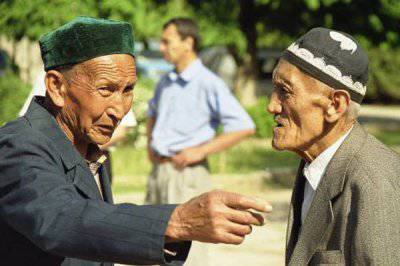 
Ukrainian Foreign Ministry yesterday summoned Viktor Likhachev, Senior Advisor to the Russian Embassy in Kiev, on the mat and reprimanded him for “incorrect statements” by Russian Consul in Crimea Vladimir Andreev “regarding representatives of the Crimean Tatar people”. On the eve, we recall, the Russian consul said on the ATR television channel that he considers the betrayal of the Crimean Tatars during the Great Patriotic War obvious, for which they were deported to Central Asia and other remote regions of the USSR in 1944. In addition, in the heat of controversy with TV anchor Lily Budzhurova, Andreev insisted that his opinion was the official position of Russia, and he asks to convey it to every Crimean Tatar.

Consul Andreev “the first Crimean-Tatar” TV channel called on his broadcast after he dissuaded Soviet pilots who had arrived in Simferopol — veterans of the Great Patriotic War — to attend the premiere of the film “Khaytarma”. The creators of the film specially invited and paid for the journey of the veterans, so that those with their presence would consecrate the premiere of the film. And then the consul confused them with all the cards.

Answering the TV presenter's question why he dissuaded the veterans, Andreev explained bluntly: “Primitive about the film. If it were a multiseries film, from the 20 series of which 17 would be about the feat of the Soviet people, Soviet soldiers, legendary pilots during the Great Patriotic War, the two series would be about cooperation with the fascist occupiers of people of the Crimean Tatar nationality, and the final one may be, a series - about the deportation, the tragedy and the state crime of the Soviet leadership, I would go to this film, I would look at all the 20 series ”.

“No matter how these words provoke insult of the Crimean Tatars to Russia,” the presenter got worried.

“Yes you what! Did I say something new? ”Asked Andreev.

"So, they say little of those obvious things that I said," Andreev insisted.

“Do not repeat. You are a diplomat! ”- the leader was indignant.

“I do not need your advice! - sharply answered Andreev. “Everything I said today is completely official.” Here, write down and scroll to any Crimean Tatar. My word and the word of Russia should sound, should be known, including my interview today. This is so that the truth about the Great Patriotic War sounded including with those episodes that for some reason 18 of May (on this day, the Crimean Tatars mark the anniversary of the deportation every year. - Note KM.RU) are hushed up. In this film, they are not. This is precisely the theme of betrayal. ”

And the Russian consul, it should be noted, was absolutely right, recalling in the run-up to the premiere of the false film about stories mass betrayal of the Crimean Tatars during the war years (KM.RU recently talked about this). Another thing is that he clearly got excited, calling his opinion (with which any honest person would agree) the official position of Russia. Unfortunately, this is far from the case, as will be discussed below. But this in no way diminishes the correctness of his assessments, to which we simply must join.

The plot of the film is built around the fate of the famous Soviet pilot, twice Hero of the Soviet Union Amet-Khan Sultan, who, after liberating Crimea in 1944, from the Germans and their accomplices, arrives in his native Alupka, where the mass deportation of Crimean Tatars is unfolding before his eyes. Already this main plot is aimed at showing how the “innocent” people are driving the “NKVD fiends” out of their land.

Translated from the Turkic "Khaytarma" means "infinite circle." This rhythm can often be heard at weddings and national holidays, the Free Press reports. Although the authors of the tape translate its name as "return".

More than 1000 people from all over the Crimea, above all, activists of the officially unrecognized "executive body" of the Crimean Tatars - the Majlis, were shot in the crowd scenes of the film.

It is curious, the newspaper continues, that at first the creative team "Haitarma" was trying to find money in Turkey, but the Turks got acquainted with the script and sharply refused. Then the well-known Russian businessman Lenur Islyamov, the owner of the Queen Group company, which is the general importer of UzDeuAvto products in the Russian Federation, came to the aid of the tribesmen. In Crimea, Mr. Islyamov controls the transport company SimCityTrans, one of the largest passenger carriers of the peninsula. He also owns the Simferopol television channel ATR.

Lenur Islyamov personally paid the extras of the new historical film, having invested about one and a half million dollars. Filming took place in Alupka and Sudak. Large scenery of the war were built in Bakhchisarai. Russian producer provided weapon, trains, cars and aircraft of those times.

Before the premiere, the Crimean Tatar media solemnly announced that military pilots and comrades Amet-Khan Sultan were invited to the first show from Moscow. And what was their indignation when a consul Andreev dissuaded the veterans to cover the premiere of this through a false film with their presence!

As for the official Ukrainian authorities, not only Crimean Tatar politicians — deputies of the Verkhovna Rada of Ukraine Mustafa Dzhemilev and Refat Chubarov, but also two vice-premier of the Crimean government, Georgy Psarev and Aziz Abdullayev, as well as the head of the Verkhovna Rada Committee on Human Rights Valery Patskan.

And here - such words of the Russian consul on the air! The Crimean Tatar political elite demanded that the Ukrainian authorities call Andreev a persona non grata and immediately expel him from the country. And the reaction of the Ukrainian Foreign Ministry, when they summoned the senior adviser to the Russian embassy, ​​Viktor Likhachev, was also quite sharp. “The representative of the Russian Embassy was told that the Crimean Tatar population is an integral part of the multinational Ukrainian society. The Agreement on issues related to the restoration of the rights of deported persons, national minorities and peoples, signed in Bishkek on October 9 on October 1992, signed and ratified by Russia, is still in effect, ”the Ukrainian Foreign Ministry said. In this regard, the Ministry of Foreign Affairs of Ukraine proceeds from the fact that the official position of Russia should be determined by the provisions of this agreement, and not by the opinion of the consular agent, said the message of the Ukrainian Foreign Ministry.

And here (in any case, from a purely formal point of view), the Ukrainian Foreign Ministry was right when it noted the difference between the official position of Russia and the opinion of the Russian consul in the Crimea. The fact is that in the 1992 year, the Russian Federation de jure indeed condemned the deportation of the Crimean Tatars (and not just them alone) and in fact restored them in their rights.

Here is what, in particular, the Agreement on issues related to the restoration of the rights of deported persons, national minorities and peoples, which the CIS countries (including the Russian Federation) signed on October 9 on October 1992 in Bishkek, and subsequently ratified:

“The States members of the Commonwealth of Independent States, hereinafter referred to as the Parties, unequivocally condemning the totalitarian practice in the past of forced relocation of peoples, national minorities and individual citizens of the former USSR as a crime contrary to universal humane principles, considering that legislative and other normative acts, adopted by the former allied, republican and local authorities and administrations, officials on the forced relocation of peoples, national from the very beginning, confirming the right of deported persons, national minorities and peoples to restore historical justice and return to their places of residence at the time of deportation, realizing that ensuring this right is interstate in nature and requires coordinated multilateral and bilateral approaches, recognizing the need to assume obligations to protect the legitimate interests of deported x persons, national minorities and peoples and ensure the voluntary return to their homes at the time of deportation, have agreed as follows:

Article 1. The parties provide deported persons who voluntarily return to their places of residence at the time of deportation, equal political, economic and social rights and conditions for settling, employment, education, national, cultural and spiritual development with citizens permanently residing there. When implementing the provisions of this Agreement, the rights and legitimate interests of citizens residing in the respective territories should not be infringed.

Article 2. The parties decide the issues of citizenship of persons resettled under the terms of this Agreement, in accordance with their national legislation, the provisions of bilateral treaties between them, and also taking into account generally accepted norms of international law.

So, de jure Russia justified both the Crimean Tatars and all other deportees, thereby committing treason against those who fought during the war not only with the Germans, but also with the traitors to the Motherland.

Meanwhile, Consul Andreev has the courage to state on the “First Crimean-Tatar” TV channel: “From this topic you cannot pull out the topic of mass betrayal of people of Crimean Tatar nationality in those years of the Great Patriotic War, otherwise we will again lie against historical truth, otherwise we will justify betrayal and say that some kind of treachery is excusable and some kind is not. Otherwise, we will bring up traitors today. I think this is a goal that is unworthy of anyone. ”

And all honest people are in solidarity with Andreev, and not with the “official position of the Russian Federation.”

Ctrl Enter
Noticed a mistake Highlight text and press. Ctrl + Enter
We are
About Stalin and Khrushchev"Circassian" and "Crimean-Tatar" questions: on similar geopolitical patterns
232 comments
Information
Dear reader, to leave comments on the publication, you must to register.