27 May 2013
12
In the seventies chinese aviation the industry mastered the production of Shaanxi Y-8 transport aircraft, which were a licensed copy of the Soviet An-12. The first aircraft of this type assembled in China, in the construction of which Soviet-made components and assemblies were widely used, took off at the end of 1974. A year later, Chinese pilots took to the air the first Y-8, completely manufactured in China. The operation of these aircraft began in the very late seventies, and quickly enough they received a lot of positive feedback. Despite some problems of a constructive and production nature, a transport aircraft with a carrying capacity of about 20 tons was very useful for Chinese aviation. Thanks to the successful design, the Y-8 soon became the basis for several new modifications for various purposes. To date, more than three dozen modifications and special aircraft have been developed and built on the basis of the licensed An-12. Not all of them were embodied in metal, but, nevertheless, are worth attention. Consider some of these machines. 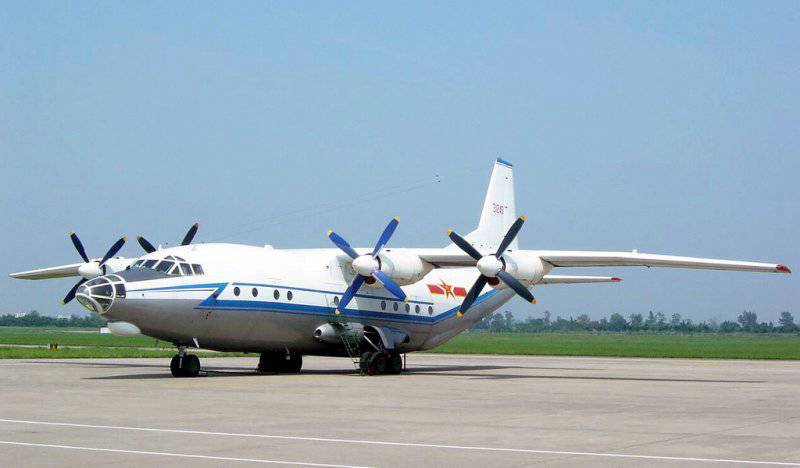 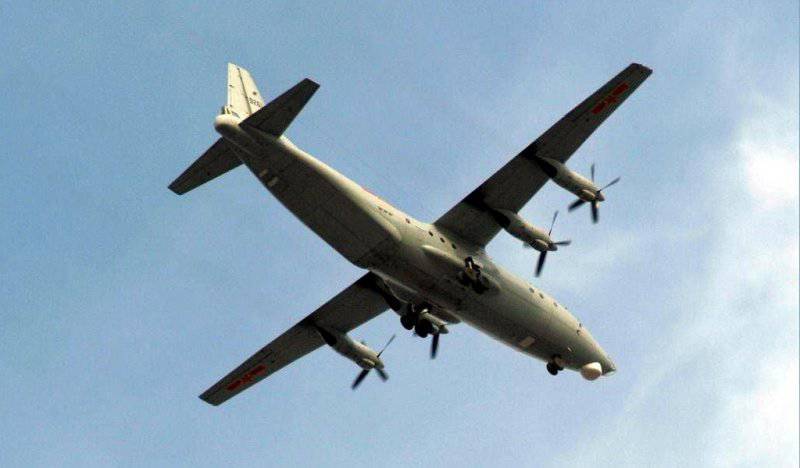 Y-8A. In the mid-eighties, China bought two dozen Sikorsky S-70C helicopters from the United States. For their transportation needed a special aircraft, the basis for which was the Y-8. A cargo ramp was installed on this transporter, resembling the corresponding unit of the American aircraft Lockheed C-130, and also modified the cargo compartment. The loading equipment was removed from it, which made it possible to increase the height of the available volume by 120 millimeters. Only one such aircraft was built, which was used only for the transportation of American helicopters.

Y-8B. Simultaneously with the Y-8A, the engineers of the Shaanxi Aircraft Company (SAC) began the development of a civilian modification of a transport aircraft. The project Y-8B implied the dismantling of weapons and special military equipment. During the rework, the transport aircraft made it easier for the 1700 kilogram, which accordingly affected its carrying capacity. Operation of the Y-8B began in the first half of the nineties.

Y-8C. At the very end of the eighties, SAC, together with the American company Lockheed, began developing another transport aircraft that differed from the previous ones in equipment and some other details. It was assumed that Y-8C will be a Y-8B with a cargo ramp like Y-8A, pressurized cargo cabin, new engines and a number of American-made systems. However, in the 1989 year, the United States ceased cooperation with China and the serial Y-8C did not receive new equipment, and remained a "hybrid" of the first two modifications of the base aircraft.

Y-8D. Back in the mid-eighties, Chinese aircraft manufacturers set out to enter the international market and created an export version of the Y-8 for this purpose. It was a civilian version of this transport aircraft, on which they installed some western-made electronics. Export Y-8D took off for the first time in 1987, and after five years deliveries to third countries began: Myanmar, Sri Lanka, Sudan, etc.

Y-8F. Perhaps the most original modification of the transport destination. In 1989, the Ministry of Agriculture ordered a special aircraft to transport small cattle to new pastures. At the beginning of 1990, one of the production Y-8 aircraft was equipped with special cargo modules. Inside the cargo compartment placed two three-storey structures, assembled from a large number of small pens. One flight Y-8F could carry up to 350 sheep or goats.

Y-8F-100, Y-8F-200, Y-8F-300, Y-8F-400, Y-8F-600. Despite the letter F, they have almost nothing to do with the aircraft for transporting livestock. Modifications with numbers in the name, created since the end of the eighties, are civilian transport vehicles. They differ from the base aircraft with foreign-made electronics, new engines, etc. For example, the newest of these aircraft, the Y-8F-600, is equipped with Pratt & Whitney turboprop engines and a satellite navigation system, as well as an updated fuselage design.

Y-8K. Special passenger version designed to carry the passenger 121. It was developed in the nineties and was built in a relatively small series. Also offered for export. 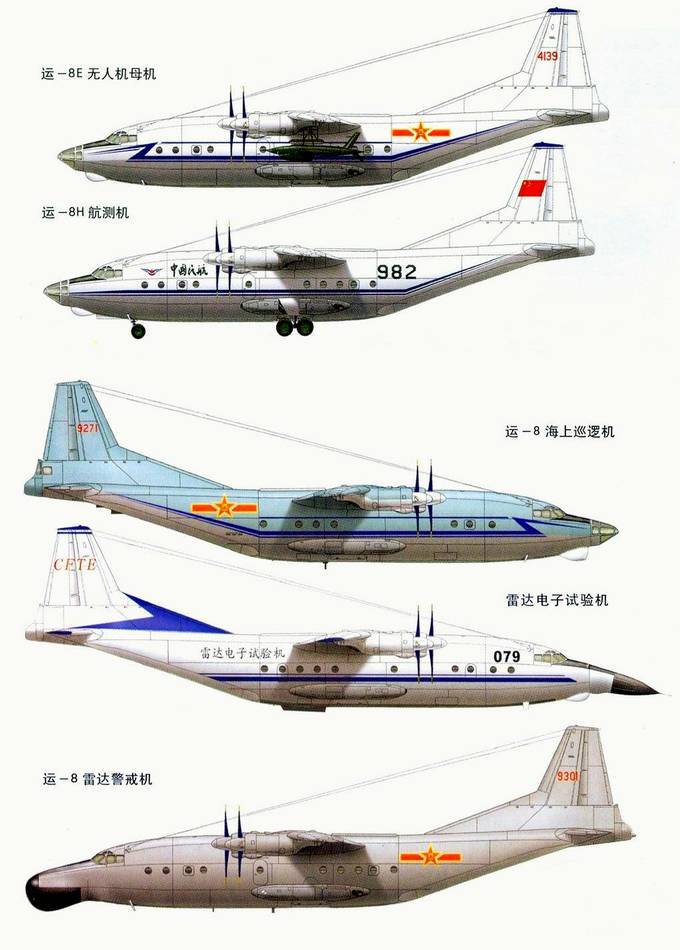 Y-8X. In 1985, the Chinese Air Force received a new aircraft designed to patrol the sea. A radar station, sonar equipment, infrared sensors and magnetometers, cameras and equipment for interacting with acoustic buoys were installed on the base transport aircraft. It is noteworthy that part of the electronics of the patrol aircraft was produced in the United States, which at that time actively cooperated with China. In total, at least four Y-8X aircraft were built, one of which was later converted according to the Y-8J project.

Y-8J. Further development of the ideas embodied in the project Y-8X. In the mid-nineties, Chinese aircraft manufacturers purchased from the British company Racal no more than eight Skymaster radars. In the autumn of 1998, the Y-8 transporter, equipped with an English radar and a number of other equipment, took off for the first time. Presumably, the Y-8X also carries a set of other sensors, corresponding to the equipment of the previous patrol aircraft. Currently, no more than four new patrol aircraft are actively operating.

Y-8CA. For the convenience of testing certain technical solutions, Xian Aircraft Industries has converted one of the serial Y-8C into a flying laboratory. From the plane, the cargo ramp mechanisms were dismantled, and the nose was redesigned. This was done for the reason that on both patrol airplanes the radar antenna was located just under the nose fairing, and in the cargo cabin was installed electronics and the workplaces of its operators. The new design of the nose of the aircraft Y-8CA allows you to install various antennas and test their work in flight. The only flying lab is assigned to CFTE (China Flight Test Establishment).

Y-8W (KJ-200). Back in the late nineties, the development of a new long-range radar detection aircraft began, which differed from another similar project (KJ-2000) in both dimensions and characteristics. On a modified Y-8F-200 transporter, an oblong fairing with an antenna of a radar station was installed on the racks. The first prototype of the Y-8W aircraft took off in the 2001 year. Later, a second prototype was built, on which more advanced equipment was mounted. It was he who became a model for further serial construction of new aircraft. The total number of aircraft Y-8W is unknown.

ZDK-03 Karakoram Eagle. In 2009, China handed over the first ZDK-03 long-range radar detection aircraft to Pakistan. The base for it was the transport Y-8F-600, and the radio-electronic equipment basically corresponded to the Y-8W equipment. Pakistani ordering involves the delivery of four such aircraft. 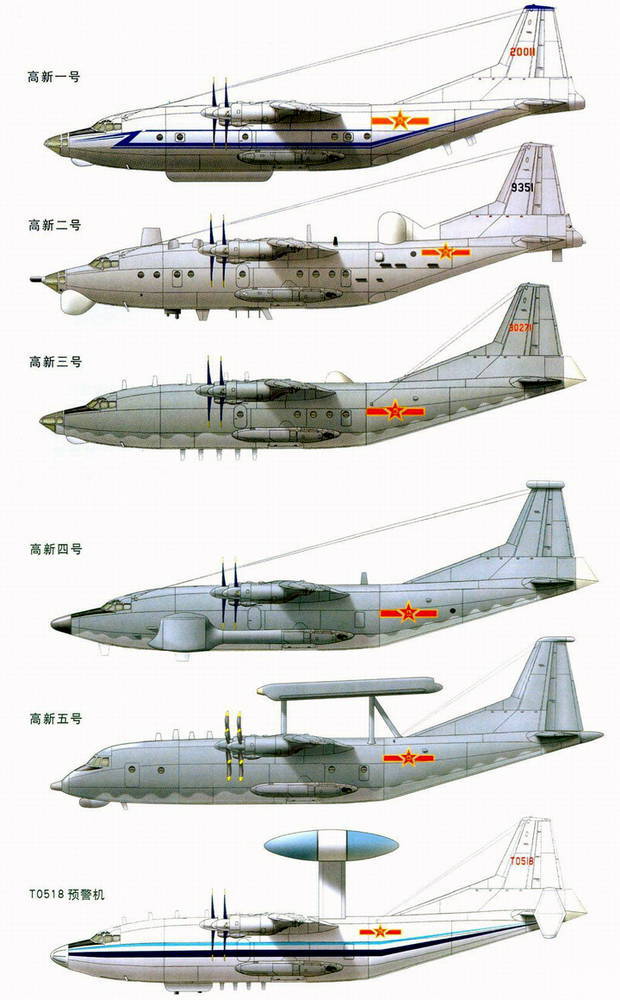 Y-8CB (Y-8GX-1). Approximately in 2000, the first Y-8CB jammer made its first flight. Unlike the base model, it does not have an opening tail hatch, and the antennas of jamming stations are distributed over its entire surface. In addition, on the bottom surface of the fuselage there is a rather large fairing of some additional antenna. The Chinese Air Force has at least four such aircraft.

Y-8JB (Y-8GX-2). Specialized aircraft electronic intelligence for the Navy. It differs from the base Y-8 by multiple antennas located over the entire surface of the fuselage. The most notable difference is the large fairing of one of the antennas located on the nose of the aircraft, under the navigator’s cabin. According to some data, when creating a complex of electronic intelligence for the Y-8JB aircraft, information obtained from the study of the American reconnaissance aircraft Lockheed EP-3, inherited by China in the spring of 2001, was used. Y-8JB aircraft have been in use since the mid-2000s. 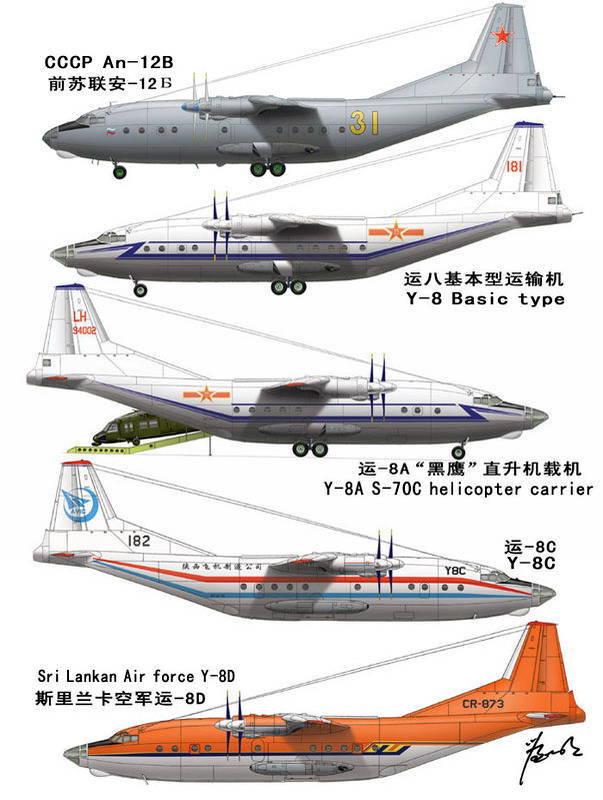 Y-8E. From 1992 to 1994, SAC produced several aircraft carrying WZ-5 unmanned aerial vehicles Chang Hong-1 (a copy of the American Ryan AQM-34 Firebee). To ensure the work of reconnaissance UAVs, it was necessary to dismantle some Y-8 aircraft’s electronic equipment, and also to remove defensive weapons from it. To mount the UAVs under the wing of the carrier aircraft, two special pylons were installed. The control panel of the WZ-5 devices was placed in the front of the pressure cabinet. The total number of Y-8E does not exceed ten units.

Y-8T. In the first half of 2000, the Chinese air force received at least three Y-8T air command posts. The machine, created on the basis of Y-8F-400, is equipped with a set of various communications equipment, as well as other equipment necessary for effective coordination of actions of different Air Force units and communication with the command of other branches of the military or the armed forces as a whole.

Y-8XZ (Y-8GX-7). Special aircraft for psychological warfare. The two (minimum) aircraft that appeared in 2007 year are equipped with a wide range of television and radio broadcasting equipment and are intended for broadcasting propaganda materials. Probably, Y-8XZ airplanes should be applied according to a technique similar to the tasks of the American Lockheed EC-130E Commando Solo aircraft: determine the frequencies of civil and military radio and television broadcasting, and then transmit their own propaganda materials to them.

Y-8FQ. In the autumn of 2011, photographs appeared confirming rumors circulating before. The new unpainted aircraft had a characteristic radome antenna under the nose, as well as a rod with a magnetometer sensor. In addition, the aircraft received an optical-location station, radiation warning systems, missile detection, etc. Thus, the appearance of the new Y-8FQ said that this is an anti-submarine defense aircraft. Apparently, at present there are no more than a few copies of this aircraft. 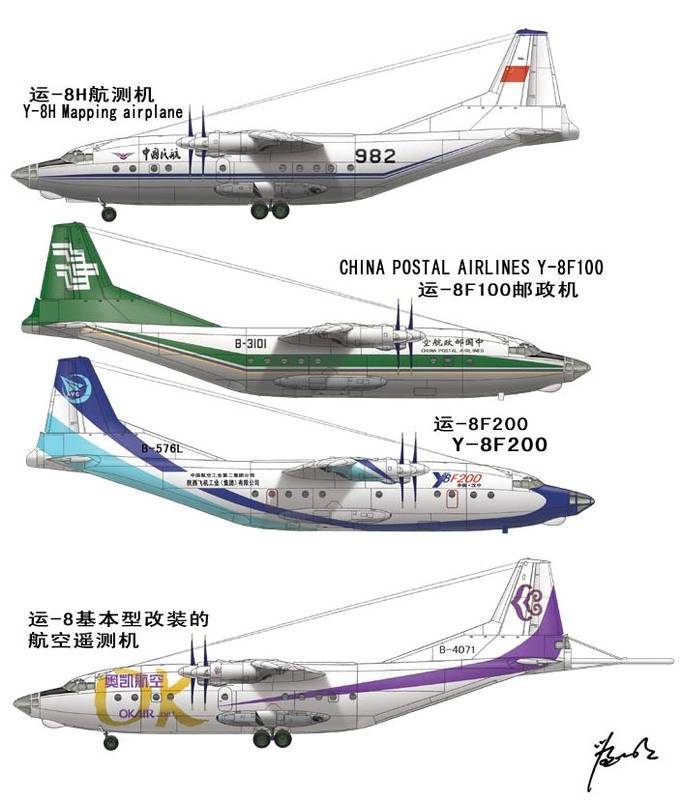 As we see, the Chinese Air Force appreciated the Soviet An-12 aircraft, and also understood and began to develop its modernization potential. In modern versions of the Shaanxi Y-8 aircraft from the original An-12, only the main elements of the airframe and several systems remain. All other equipment, such as engines, electronics, etc. repeatedly changed and improved. For this reason, new aircraft based on the Y-8 will continue to appear over the next years and the total number of types is quite capable of crossing over fifty.