Vodka pilots do not give! 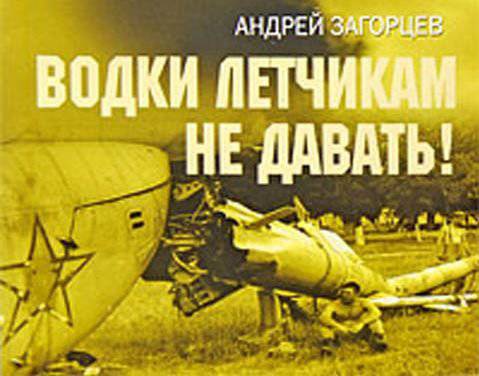 Vodka pilots do not give!

Once at a general gathering, that is, at a meeting of all the chiefs invested with power, the valiant pilots complained:
“We have little intelligence information about the KTO zone, we fly, we fly, and we don’t know there are bandyukas under us, or special forces, (which, given our current legal framework, would be more amusing to say, say,“ monopenisual ”).

- Fuck you information? - the chief of staff of the group was indignant, so you will achieve the planned horseradish flights, and how you find out that in the area of ​​bandyuki, so all screws will be bent to you by x ... m, alright.
- Chief of Intelligence! Provide our winged brothers with information.

HP puzzled this spetsnaz chief's problem, who in turn puzzled the court Khankala detachment, which was located just next to the airbase.
But I forgot, however, the chief Special Forces officer, that the task should be set to a specific person, and not to transfer it to the battalion commander through the half-witted lieutenant who had been on duty at the TsBU that night.

Leteha lost all night in Wolfstein and by morning he forgot everything.
Even with a change of attire, he tried to introduce himself as an agent Blazkovich for, so that he would be ridiculed by others in exactly the same way that Volfstein didn't care about.
The new officer on duty set up, behind the computer of the TsBU officer on duty, and launched Kazakov.

Closer to 11 in the morning, a lieutenant colonel in flight form appeared, exhausted from the heat, strenuously pretending to be the intelligence chief of the airbase.
He trampled on the checkpoint, and tried to penetrate into the territory of the detachment, but was caught and caught, vigilantly time.
After half an hour of admonitions and explanations, the day-to-day understood that some pilot had arrived, but he did not understand why he came to the Yakut nationality.
“Tell your intelligence chief that the pilots arrived for the report,” he begged the soldier.
“Yeah,” said the man of the day, and, exhausted from the heat, went under the fungus to the telephone.
Fifteen minutes he twisted the handle, and at the same time he squeaked relish while the handle was spinning, the information that had to be brought to the duty officer completely disappeared from my head.
Finally, he got through to the duty officer of the Cossacks who staged a riot, so the duty officer was a little nervous.
- Well, what are those deer? - He asked in the pipe.
The soldier Yakut remembered the deer and dreamed, smiled.
“Fuck, what the fuck,” the attendant shouted into the pipe.
- AAAA, comrade lieutenant, then the pilots came for vodka, - blurted the day one.
- What a dick vodka? Pilots? They fucking little alcohol, or what? - the attendant boiled,
- Fuck him, we have no vodka.
He shrugged and moved toward the pilot's scout.
“No,” he said. “They probably sold everything.”

The distraught pilot opened his mouth and decided to stop by later.
Later, the pilot nevertheless achieved some results, the daily telephoned, the duty officer, in turn, called the squad of the detachment, having decided once the pilots came for vodka and for some reason went to the head of the reconnaissance squad, he somehow figured it out.
An unshaven nachoper came, dressed in spite of the heat, in a camouflaged ShPS (fagot cap special forces) and in magnificent TTSs (underpants tank blue).

Learning that the pilots had arrived and even for vodka - the captain of the beginning. the operas did not go ahead, but cautiously scout, but through the mediation of the day-to-day, I found out that the scout pilot came supposedly with the permission of the head of the intelligence group.
- Oh, you, - thought nach. operas The thing is unclean. I will call right now to the higher headquarters, to my directional director, and find out what these things are.

Having phoned, to the special forces duty officer. operas, cautiously, so inquired whether there were any orders for issuing vodka to pilots.
Outweighed on duty in the department as they say in the common people "the headlights did not cut", and also very carefully otmazma, say: "I am the current, the current has acted. Right now, the chef will be interested in him. ”
Captain beg. the operas at the other end of the Zasov apparatus, sensibly reasoned that the thread stretches even higher, and decided that it was necessary to report to his direct chief, or to be more precise, to the chief of staff.

NS pumped "triceps" in the rocking chair, having finished the series he listened to the beginning. the opera and cursing went to ring up the head of the spetsnaz department.
The chief specialist was just sitting in the office and received reports from subordinate units.
And then - here, the pilots came to the spetsnaz detachment, they demand vodka and they say that the head of the reconnaissance group allowed them to take vodka from the special forces.
- “You know what, my friend!
Let the battalion commander better call back on this issue to the chief of intelligence.
I understand that vodka is a personal matter.
If the excess is - then give, but a little.
I can't order you. ”

The reconnaissance pilot standing at the checkpoint squad spat on everything and went to drink diluted alcohol.
Spetsnazovskiy battalion commander, having learned that he needed to call about the ohame pilots, NRu immediately grabbed the pipe and phoned the Chief and indignant in colors and colors, painted as crowds of distraught pilots besieged the checkpoint of the Special Forces detachment, demanding, pleading and begging them to give them vodka when they closed it. .
The chief of intelligence went wild and snarled into the phone:
- VODKA PILOTS DO NOT GIVE!!!
After that I got through to the commander of the air base and expressed everything that he thinks about the pilots and their morals.

In the evening, at the airbase, everyone who got drunk in the eyes of the commander was slapped by a stranger.
Including reconnaissance pilot, drunk diluted alcohol.
The strict commander told him:
“You, Lieutenant Colonel, instead of eating a Khanka, would take reconnaissance from the special forces ...”

In the morning a half-sober lieutenant colonel stood at the checkpoint of the detachment at eight o'clock.
The last soldier, the Yakut, who has not yet changed, having seen the pilot - twisted the handle of the phone:
- Comrade Lieutenant! Pilots again for vodka came ...

Ctrl Enter
Noticed oshЫbku Highlight text and press. Ctrl + Enter
We are
Myths of the Great Patriotic. Papier mache helmetVodka pilots do not give !!!!
19 comments
Information
Dear reader, to leave comments on the publication, you must to register.