24 May 2013
46
Today Russia celebrates the Day of Slavic Literature and Culture. It is dedicated to the memory of Saints Cyril and Methodius, who invented the Slavic alphabet. Similar celebrations take place in the Bulgarian Republic.


At a time when Bulgaria was preparing to celebrate 24 in May - the Day of Bulgarian Enlightenment and Culture and Slavic Literature, the Day of Saints Cyril and Methodius, and also the anniversary 1150 anniversary of the creation of the Cyrillic alphabet - an inscription appeared on the European bill in Cyrillic alphabet "EURO". The first Permanent Representative of the Republic of Bulgaria in the European Union, and now the Ambassador Extraordinary and Plenipotentiary of the Republic of Bulgaria in the Russian Federation, recalls how difficult this decision was made. 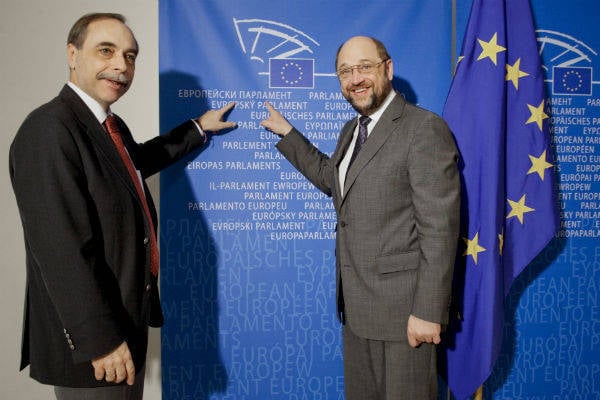 In 2007, Bulgaria became the first EU member state in which the Cyrillic alphabet was the official alphabet. Even in the accession documents written in Bulgarian, where it was a single currency, its name was also written in Cyrillic: EURO. At that moment, no one suspected that a few months later, a serious problem would arise: how to write and pronounce it? The European Central Bank insisted that the term “euro” as a currency is a technical term, and it should be the same in all languages ​​of the European Union, respectively - in Bulgarian, and it should have been pronounced “euro ". But since such a transliteration was never applied in the Bulgarian language, this position was categorically unacceptable for Bulgaria. In practice, this would mean ignoring not only the Cyrillic alphabet as the third alphabet of the European Union, but also the entire invaluable Slavic spiritual heritage and the age-old cultural wealth associated with it.

Cyrillic, having appeared 1150 years ago, has become a new landmark in stories Slavic peoples, and the introduction of a single writing was a colossal cultural event. Cyril and Methodius brothers of equal apostles were declared pope by the holy co-protesters of Europe. For centuries, the Orthodox Church deeply honored them and their students and followers, those who bequeathed to us the majestic Christian heritage, which gives the spiritual appearance of both the Church’s mission among our and other Slavic peoples, and the character of the Bulgarian culture itself.

We could not compromise on the question of writing the word "EURO" as "EURO". This would mean giving up their alphabet, from a worthy history of their spirituality, from their significant civilizational contribution to the development and enrichment of European culture, which united about 200 millions of people sharing common traditional values.

At first we tried to defend our opinion and prove our right with the help of the laws of grammar. However, the European Central Bank did not accept our arguments. He referred to the fact that, if, they say, they will be guided by the grammatical features of all 27 countries in the European Union, this can lead to a wide variety of translation options and legal instability, which, for its part, will lead to problems in the functioning of the euro. In this situation, we could only refer to European legislation, according to which the name of the common currency should be the same in all official languages, taking into account, however, the existence of different alphabets. That was exactly the decision of the Madrid summit in December 1995 of the year - about renaming the ECU into EURO and about its phased introduction as a calculated currency. And when they asked us to prove that the word "EURO" in Cyrillic is written exactly as "EURO" in all countries using this alphabet, we decided to inquire on the official websites of the central banks of the countries writing in Cyrillic. Everywhere it was - "EURO". In order to reach a consensus, we put forward the following argument: translated into Bulgarian, the treaty on the accession of the Republic of Bulgaria to the European Union, ratified by all the Union countries, the Eurocurrency is marked exactly as EURO, in accordance with the fundamental principle of civil and international law Pacta sunt servanda.

In this situation it was very important that all Bulgarian institutions took a unified position on this issue. And, despite the rather strong pressure to accept the single currency precisely as EURO, as a result of such unanimity, the use of diplomatic skills and using the rules and procedures of the EU, we managed to convince our opponents of the correctness of their arguments. Thus, we were able to defend and preserve the inviolability of our spiritual traditions. After two and a half months of difficult negotiations and efforts, the decision was made. This happened during an intergovernmental conference in Lisbon at the end of 2007. Thus, the Cyrillic script was accepted and now on the all-European banknote of the new issue is already printed in Cyrillic EURO, and this is the alphabet on which more than 200 million people write, 140 million of whom live in Russia.

Today we celebrate the 1150 anniversary of the creation of the Cyrillic alphabet as an integral part of Slavic culture. This is a very significant event in our common cultural and spiritual life. The case of Cyril and Methodius brothers is deeply democratic, highly humane, Pan-Slavic and progressive. It is the most significant contribution of the Bulgarians to the formation of common Christian roots, to European and world culture as a whole. According to the 24 tradition of May, we will gather at the monument to Cyril and Methodius to lay wreaths and express deep admiration for their great work. The monument to our two enlighteners is located in the very heart of Moscow, not far from the other, dear to the hearts of every Bulgarian and Russian, a monument to the centuries-old Bulgarian-Russian friendship - the Chapel-monument to the grenadiers who fell in the battles of Plevna. This year, our fraternal countries solemnly celebrated the 135 anniversary of the liberation of Bulgaria from the Ottoman yoke and the restoration of the Bulgarian statehood as a result of the Russian-Turkish war of 1877 - 1878. And again, we, Bulgarians and Russians, according to tradition, will lay flowers at the Chapel-monument. Both monuments are located on both sides of the same small Ilyinsky Square, which has turned in the most natural way into a symbol of our fraternal ties, whose historical, Orthodox, spiritual and cultural roots go back in time.

In connection with the anniversary dates, which we celebrate solemnly this year, we made an official offer to consider the possibility of calling this square "the Square of Russian-Bulgarian Friendship". Such a decision will become, in our opinion, an expression of adherence to common spiritual and cultural roots, a convincing confirmation of a careful attitude to our historical heritage.

Ctrl Enter
Noticed a mistake Highlight text and press. Ctrl + Enter
We are
Alphabet globalizers. Latin alphabet as an ideological weapon of the WestAK-12 come up with in Israel? Galil Ace review
46 comments
Information
Dear reader, to leave comments on the publication, you must to register.