Who did Russia fight in Chechnya? Excerpts from "free" newspapers 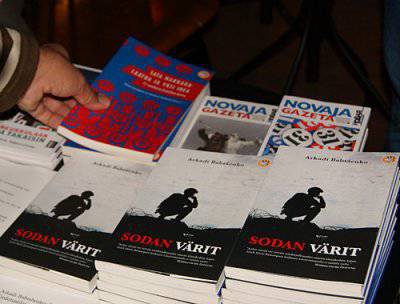 The existence of information projects, and sometimes entire campaigns against Russia, is now naively denied. In any difficult period for Russia (for convenience of consideration of the phenomenon, we will focus only on the post-Soviet reality) there was a clear media vector, the purpose of which was to deliver an informational blow to our country, to the consciousness of its citizens. His goal is to form a negative image of Russia abroad. The two Chechen campaigns, the confrontation with Georgia, the support expressed by the Russian Federation of the majority citizenship in Syria are just a few examples of when the foreign media, as well as their particular Russian colleagues, organized informational art shelling of positions taken by the authorities of the Russian Federation and the majority of its citizens. The terrorists were declared rebels or freedom fighters, the leaders of gang groups — the liberators of the Caucasian (Syrian, Libyan, etc.) peoples, and the organizations that finance the militants — patrons of democratic change.


What only are the publications of a number of media (both Russian and foreign), which today would be called ultra-liberal, about the course of the First Chechen War, in which Chechen fighters carrying out explosions of columns of vehicles of federal troops were called only partisans. It turns out that the press, which used this terminology, made it clear to its readers that it considers Chechnya of the 1994-1996 model as a separate state, for whose independence the partisans (not the terrorists) waged war in the enemy's rear.

In one of the January 1995 issues of the Kommersant newspaper, materials from various conventions from different years were published. This information collection, which was associated with the Chechen events, had a strange raid. Here is one of the quotes selected from a group of international conventions that Kommersant decided to offer its readers at the height of the 1 Chechen campaign:

Of the additional 1977 protocols of the year: Protocol No. 1 extended all the rules of warfare to conflicts in which nations are fighting against colonial domination and foreign occupation, against racist regimes and in the exercise of their right to self-determination.

It is noteworthy that the publication in which this phrase was used in Kommersant 18-year-old was published under the heading “Provisions of international law that can be applied to the conflict in Chechnya”. What means can be applied? It turns out that those responsible for the release of this material at one time decided to “prompt” foreign masters what kind of leverage could be used on Russia - for example, to accuse her to the heap of a colonial war and the occupation of Chechnya ...

Representatives of the Baltic press were notable for special variations in the coverage of events in the Chechen Republic during the 1 campaign. If we monitor those interviews that during the First War in Chechnya, the leader of the separatists, Dzhokhar Dudayev, gave the press, then the question arises: was there at least one media company in the Baltic States, at least one publication that was not related to floriculture or the correct sprats that did not take an interview with Dudayev? After scrolling through the ballot papers of the Baltic newspapers of that time, it seems that more Baltic journalists worked in Grozny of the 1994-1996 model of the year than anywhere else, including the Baltic republics themselves.

Why would such an interest be very remote from Chechnya region? Probably due to the need to transfer experience in leaving the "colonial rule". And even more likely - as support for the considerable number of Baltic mercenaries who passed on this very experience in the ranks of the units controlled by Dudayev, Basayev and other “fighters for independence”, “rebel heroes” who didn’t shy to cover their, forgive, pregnant asses women and babies.

Here is an excerpt from the March (1995) interview of Johar Dudayev to the Lithuanian edition Lietuvos rytas.

Our people (Chechens) have never been so close to freedom and independence, and at the same time they were not so close to total physical extermination as they are now. I promise that the war in Chechnya will continue for at least half a century until our republic becomes independent.

In the same interview, Dudayev also addressed the so-called world community, urging it to control the nuclear weaponwhich is in the hands of the “Russianists”, since if Russia gets rid of Chechnya, it will begin to make claims to Poland, Yugoslavia and other countries.

And we remember very well that our nuclear weapons were really controlled by the “world community” in the person of the main “social activist”: uranium was sent to the USA for a pittance, nuclear missiles were turned into colander.
For obvious reasons, this interview, as well as hundreds of people like it, was replicated by the foreign press, which exhibited Dudaev as the leader of the state leading an uncompromising struggle against the colonial regime. And what to talk about noodles for foreign ears, when even in Russia itself there were enough and such people who don’t give up this noodles with humility and some unhealthy pleasure, sorry, hawala ...

Notable for the apparent anti-Russian rhetoric during the First Chechen and "Novaya Gazeta". This quote by Mr Krugov alone in this edition gives reason to reflect on the total wave of information counteraction that Russia faced then:

Grozny should become the second Stalingrad. It should attract the attention of the world community to the Chechen events.

And again, the "global community." As the saying goes: the goal is clear ... And if in the rest of the text, it turns out that the author of these lines equalized in his mind the struggle of the Soviet people against fascism and the opposition of militants in Grozny to the federal troops. And if so, then it is quite clear who Novaya Gazeta considered in this situation as fascists ... Not Dudayev’s extremists.

For a moment: “Novaya Gazeta” still continues to delight its readers in Russia with “sharp reports”, apparently guided by the thesis: “Who remembers the old ...” This can be considered as an important point for those who continue to shout at all corners that in Russia for a long time there is no freedom of speech. As you can see, such freedom is not just there, it still sometimes goes beyond all limits of decency.

And after such permissiveness a'lya Gozmans appear, who also allow themselves the reasoning in the press pages that, they say, we have not fully decided on the criteria of fascism, and therefore continue to shoot the "wrong" films, without learning anything from the advanced West.

No, no one is going to call for freedom of speech to crush - God forbid. This pressure was already there, and it did not lead to anything good. But still it is worthwhile to distinguish the concept of freedom of speech from such concepts as outright informational provocation. If the comparison is made by Russian citizens convicted by at least some authority (even the fourth), a soldier of the Russian army with the fascists, and Grozny with Stalingrad is awarded for freedom of speech, then this is already an obvious overwhelming.

For freedom of speech, materials were also given out in which the “progressive” Western and similar Russian press counted the number of losses during the 1 of the Chechen company. “Freedom of Speech” led to the fact that if we sum up the data on the number of dead civilians in Chechnya, published only by European newspapers, it turns out that this number is at least twice as large as the entire population of the republic before the entrance of federal troops ... Such freedom the words more closely resemble a classical information war, in which, as is well known, the less truth, the better for the side that is advancing in terms of information.

The notorious Zbignev Brzezinski even then decided to use the tactics of the information war against Russia in the form of a stuffing of monstrous misinformation in the media. In the 1995 year, on the pages of American newspapers, material appeared for the authorship of Mr. Brzezinski, in which he asserted that he had in his hands data obtained by intelligence services of several countries of Central Europe in the North Caucasus.

These data allegedly indicate that Moscow is already ready to use chemical weapons against Chechens ... Then the stuffing did not work, but it worked several years later - against Iraq with the famous ampoule of Powell, who apparently read the materials of the specified author at one time.

After this, the question arises: with whom did Russia fight in Chechnya? Yes - terrorists, yes - militants of all stripes, yes - radicals. But there was also a force that at times struck Russia with equally painful blows than the whole criminal camarilla. And this force is “progressive and immensely truthful” media. And Western, and Arab, and Russian. All their work is work aimed at total informational pressure against Russia and its interests, presented in the rank of freedom of speech, which had to be conveyed to people all over the world. It was reported ... "People around the world" swallowed ... Someone else wants, and therefore this misinformation industry continues to thrive, soaring over both the legislation and the objective reality.

Ctrl Enter
Noticed oshЫbku Highlight text and press. Ctrl + Enter
We are
Chateau d'If: the prison fortress of the “romanic” imageTactics of the Afghan insurgents
59 comments
Information
Dear reader, to leave comments on the publication, you must to register.