24 May 2013
80
The Kyrgyz authorities decided not to renew the agreement with the United States of America related to the location of the so-called Transit Center of the US Air Force in Manas. It is worth recalling that “Manas” is a civilian airport, located about a couple of dozen kilometers from Bishkek, in one of the clusters of which American soldiers have settled since December 2001. Initially, the American presence here was called the Manas military airbase, and it was said that the base used to carry out operations in Afghanistan by the coalition forces would last no more than three years in Kyrgyzstan. However, as time went on, Washington was clearly not going to cede the part of the airport that actually came under its control. 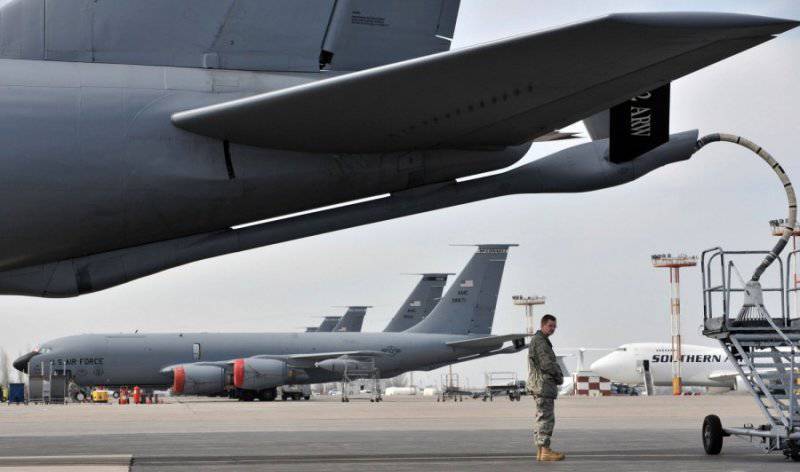 About 6,5 years after the discovery of the American aviation Air Force base in Kyrgyzstan, then (at the time of 2008), President Bakiev said that the US Air Force base in Manas should cease operations. At that time, it provoked a positive reaction from Moscow, which, although not directly, accused Bishkek of trying to sit on two chairs (the Russian air base in Kant had already appeared in Kyrgyzstan by that time). As they say, they have already begun to rub their hands and rejoice at how Kurmanbek Bakiev will expel the Americans from the territory, which Russia has long considered its zone of influence. They even allocated a dollar loan at symbolic interest to Bishkek, but ... American "friends" frequented Kurmanbek Salievich immediately after such words, and were able to make him an offer that he could not refuse. The proposal was as follows: rename the military base to the very Center for Transit Transportation, and plus this - increased rent for the presence of American troops and equipment in Manas.

For obvious reasons, Moscow was not satisfied with such a trick from the Kyrgyz president. Well, it turns out: in Russia, Bakiyev says one thing, while meeting with the American "partners" - something else, - began to reflect on the representatives of the Russian authorities. Such a president of Kyrgyzstan, as they say, we do not need. And it just so happened that Kyrgyzstan literally several months after the transformation of the American military airbase Manas into the American military transport center Manas went through another revolution, following which Mr. Bakiyev urgently had to leave the territory of Kyrgyzstan, like many members of his family. His big clan, the new authorities of the country accused of embezzling credit funds (the ones that were issued by the Russian Federation) and abuse of authority. One of those who left Kyrgyzstan (from among the close relatives of Kurmanbek Bakiyev) was his son Maxim, who was put on the international wanted list in 2010.

As is known, Almazbek Atambayev became the next president of Kyrgyzstan after the elections, who at first differed in his tricks directed against Russia, trying to play two instruments at once, but then his policy became more and more mated with official Moscow’s policy. Atambayev said that Kyrgyzstan sees Russia as its primary partner in the region, and is ready to take the path of comprehensive integration. One of these ways is joining the Customs Union, which, according to experts, is just around the corner for Bishkek.

It was during the presidency of Atambayev (that is, now) that the Kyrgyz government sent a document to the country's parliament that denounces an agreement with the American side on finding the air traffic control center in Manas from July 11 of 2014. Now Kyrgyz parliamentarians will have to review this document and decide whether to ratify it or not. Of course, with the composition of the Zhogorku Kenesh (the Kyrgyz parliament), which is present today, ratification can be considered a matter of decision. However, in this case, one should not lose sight of those moments that may prevent this ratification. And there are such moments.

For example, will Almazbek Atambayev be able to resist the “friendly message” of the American authorities if they still want to leave their base in Manas? Does it not turn out that the US Transit Center will now be renamed to some Center for the exchange of international experience? Will Mr. Atambayev's will power not to succumb (like his predecessor Kurmanbek Bakiyev) to another American gingerbread?

So far it seems to be enough, because Atambayev said that even the 60-million (in dollar equivalent) annual losses of the budget of Kyrgyzstan, associated with the possible dissolution of the American TSC in Manas, the country will certainly compensate for other sources. Will Russia become this source? - Very likely.

By the way, in connection with the desire of the Kyrgyz authorities to cover the American airbase (whatever name it is), the question arises: what did affect the official Bishkek, which suddenly decided to show the American fig. Several versions are put forward on this score, which together can give a completely unambiguous answer.
First, the Kyrgyz authorities, who declare their desire to enter Kyrgyzstan into the Customs Union, were finally asked to set foreign policy priorities, choosing their main partners in the region. In other words, Bishkek could well put an unofficial ultimatum: either cooperation with the countries of the Customs Union in the military-technical sphere, or "farewell, membership of Kyrgyzstan in the Customs Union."

Secondly, Bishkek in this regard could well show, let's say, a reasonable initiative. Understanding that the presence of an American military facility on the territory of Kyrgyzstan will contribute to a certain dissonance in relations with the countries of the Customs Union, Almazbek Atambayev could independently make a decision aimed at showing a clear vector of state foreign policy.

Thirdly, one should not forget that quite recently official Bishkek experienced a humiliating course of American judicial bodies. We are talking about Maxim Bakiyev, who in 2010 was detained by the FBI in the UK. In addition to the charges against Bakiyev in Kyrgyzstan, the US Department of Justice also launched his accusation against him. This accusation was a securities fraud. The son of a Kyrgyz ex-president was sent to the United States.

After several court hearings of 13 in May of 2013, Bakiyev Jr., the US justice authorities decided to release with the wording “insufficient evidence base of the prosecution”, despite the fact that in Kyrgyzstan itself Maxim Bakiyev was sentenced in absentia to 25 years of imprisonment. Inspired by his success, Bakiyev even decided to appeal the verdict, which was imposed on him by the Kyrgyz court. His lawyer filed an appeal against the decision of the Pervomaisky district court of the city of Bishkek.

Obviously, the release of Maxim Bakiyev from custody in the United States and the reluctance of the American side to extradite him to Kyrgyzstan became for the official Bishkek something like a frank political spittle. It was after this that the direct rhetoric of the Kyrgyz authorities that the American Transit Center in Manas had no place proved itself. It turns out that the Americans themselves approached their departure from Kyrgyzstan ...

However, we will not be so categorical. The East is a delicate matter. In spite of the fact that the USA (NATO, ISAF) has a dime a dozen all over the planet of air bases and TSCs (CCT in Ulyanovsk, for example), will Washington want to surrender without a fight in Kyrgyzstan? Will only want if Manas finds a suitable alternative in the region until July 2014 of the year. As they say, the troops in Afghanistan come and go, and the influence in Central Asia is a tempting thing ... And if not Manas, then what?

As an option, which has recently been quite actively discussed in the media, the opening of a certain semi-CTP (semi-aviabase) in Uzbekistan, which, by the way, is now well for the United States not even included in the CSTO, and therefore cannot cause censures. But if Islam Karimov is going to “shelter” the American base (in one form or another) on his territory, then for what purpose did he fly to Russia not so long ago to meet with Vladimir Putin? Karimov could well have discussed with his Russian colleague the possibility of locating the American (NATO, ISAF-sky) TST in Uzbekistan with the wording: well, you also have in Russia ...

In general, information about the appearance in the Kyrgyz parliament of a draft law on the denunciation of the Kyrgyz-American treaty on the TPC in Manas, has passed. It remains to wait whether Atambayev really is the Kyrgyz leader, whose words do not differ from the deeds, or is it worth holding “Bakiev's promises” in his head.

Ctrl Enter
Noticed a mistake Highlight text and press. Ctrl + Enter
We are
Situational analysis of the death of the MH17 flight (Malaysian Boeing 777), made on the basis of engineering analysis from 15.08.2014Results of the week. “Lord, why didn't England please him ?!”
80 comments
Information
Dear reader, to leave comments on the publication, you must to register.