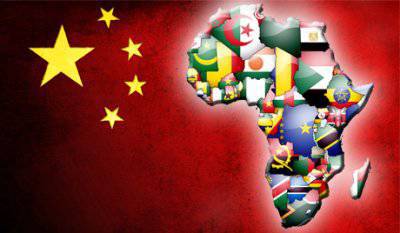 Recently, a lot of talk about Chinese expansion around the world. However, not one volatile China walks around the planet. While the Celestial Empire is building its Asian and African plans, the West is not only trying to keep up with it, but also to regain its former colonial influence. The economic battle for resources turned into a major geopolitical rivalry between the European powers and Beijing.


France is active in Mali. Recently, fighters for world peace from the portal antiwar.com, whose opinions are interested in the portal "Military Observer", explained that the preservation of thousands of French soldiers in Mali forever (as promised by the Minister of Foreign Affairs Laurent Fabius) is not intended to achieve the goal of “fighting terrorism”, but to ensure control over Mali’s natural resources. So that the French warriors in Mali did not stagnate, the military leadership even developed a rotation plan.

But Mali, according to open data, is not only the largest exporter of cotton in the region, but also ranks third in Africa for gold production. Yellow metal is the main source of income of this state. Mali produces about 50 tons of gold per year (20% of the country's GDP and about 70% of exports). Mali's gold reserves are estimated at 600-800 tons.

Who is the main buyer of Malian gold? Of course, China. Its share in purchases of gold from Mali is 26,4%. Here we find the second goal of the French government: to oust China from Africa. This goal is consonant with the goals of the United States, which does not like the growing power of the Middle Kingdom.

It’s not for nothing that Leonid Ivashov, President of the Academy of Geopolitical Problems, said at the end of January 2013 that he considers the operation in Mali to be a continuation of the war for global resources. In Mali, считает General Ivashov, the Americans "play with the hands of Europeans." The French will clear the territory of radical groups, and then there will be people from Washington - to bring the power they need to power. The analyst considers the peacekeeping operation a “cover-up” of true goals. There is the establishment of control over the territories rich in resources and bringing to power those forces that will forever worship the West.

Who will get more gold - the Americans or the French - is still in question. Somehow share it.

General Ivashov knew what he was talking about. In order to bring the pro-Western forces to power, Paris has scheduled elections in Mali - and he intended to organize and conduct them in a very short time. French Foreign Minister Laurent Fabius appears to be one of the practicing theorists of neocolonization, said: “Elections will be held in July. No one, including politicians, offered any other options, it is very important for us that the voting be held within the specified time frame. ” Analysts point out that the deadlines are too tight, if we also take into account instability in the north of the country and four hundred thousand (!) Refugees.

Anatoly Miranovsky (Pravda.ru) told that the British (as if all of a sudden) accused their longtime neighbors in South Africa - the Germans - in the long-standing genocide of the Namibian population. This is stated in the book “The Kaiser Holocaust by David Olusag and Kaspar Erihsen: The Forgotten German Genocide and the Colonial Roots of Nazism”. According to the British, in the Negroes German colonists tried out systems of mass extermination of people in concentration camps. Yes, and experiments on people also began there, and the first uniform of the Nazi assault troops - brown shirts - the authors of the book associated with the camouflage form of the Namibian settlers.

If the majority of the colonial territories turned out to be unprofitable for the Reich treasury, then this did not apply to Namibia. Namibia and South Africa quickly became the main diamond producing countries of the continent and the world.

The last distinguished already the British. While the Germans were colonizing, writes A. Miranovsky, events in South Africa were developing in parallel, where the enterprising Mr. Cecil Rhodes launched a competing diamond mine.

In the 1904 year, the Herero tribes revolted in Namibia. In the first days of the uprising, the German 123 was killed. The British were behind the Herero. After a series of battles, Herero began to retreat to the British colonial territories, and the Germans who were captured by the rebels were pushed into concentration camps.

Meanwhile, in the neighboring territory of South Africa, the British launched concentration camps for the Boers. At that time, it was fashionable in the West: the United States was engaged in opening camps for locals in Cuba and the Philippines, France drove the Algerian aborigines behind the wire, and the Dutch “formatted” Indonesia.

In 1985, the United Nations recognized the war against the hereinafter act of genocide. The official demand for compensation for the genocide of the Herero tribe brought Germany in 2001 year. The Germans refused both that year and again in 2004.

Was it bad that Namibia had German colonization?

“Namibians still use thousands of kilometers of railways built under the Germans. The country has surprisingly good service, cleanliness on the streets, and the black population does not rush at whites, as in the neighboring democratized South Africa. And, by the way, the national dress of the Herero tribe today is the clothing of a hundred year old German colonists ... ”

According to open sources, 32% of Namibian residents speak German.

But not everything is as good as it may seem. One fifth of Namibia’s GDP is in the mining industry: in addition to diamonds, there are uranium, copper, gold, lead, zinc, tin, silver, tungsten and gas in the country. At the same time, unemployment in the country ranges from 30 to 40%. The average monthly per capita income is about 150 dollars, but income is distributed very unevenly. According to the UN, in 2005, 34,9% of the population lived on less than a dollar a day (the poverty line adopted by the UN), and 55,8% lived on less than 2 dollars a day.

After the Germans, Namibia was controlled by South Africa for more than six decades, in other words, the same British. The independence of Namibia was proclaimed only in 1990 year.

Nevertheless, in Namibia diamonds are mined by the Namdeb company, and half of it belongs to the international corporation De Beers, founded in the 1888 by Briton Cecil Rhodes, who signed an agreement with Rothschild Bank. "Namdeb" - partner De Beers and the Government of the Republic of Namibia (50: 50). What the Germans refused was somehow got to the British.

The fact that the Europeans didn’t draw, the Chinese take. Alexander Bondarenko ("But") spoke about the African strategy of the dragon.

In China, energy consumption is increasing: since 2001, it grows by about 13% per year. Giant energy demand in China is associated with steel production. China accounts for over a third of global steel production. In 2010, the PRC needed 8,36 million barrels of oil per day. China pushed the US into second place and is the main importer of raw materials on the planet. The PRC imports about a quarter of the world's fossil and fuel. And the most attractive commodity market is Africa. In addition, the African continent in the future - a huge market.

Today, one of the techniques of Chinese market expansion is the use of the thesis of community historical the fate of China and Africa. The emphasis here is on the general former dependence on the Western powers during the period of the colonial past. With such an argument, the PRC seems to show a sense of solidarity with the Africans.

The Western press writes about the PRC's African policy as cynical and immoral, but China, unlike the West, proclaims non-interference in the internal political affairs of African states and in fact follows this principle, says Alexander Bondarenko.

“... He is not interested in the situation with the observance of human rights, freedom of speech, election fraud and corruption in Africa. He does not criticize official regimes with which he maintains diplomatic relations, nor does he link economic and humanitarian cooperation issues with the observance of human rights, which very often is an obstacle to similar ties between Western powers and African countries ... ”

In 2012, the African Union opened a new headquarters in the Ethiopian capital Addis Ababa. It was built mainly by Chinese specialists, and construction was funded by China. This has become a symbol of the growing influence of the Middle Kingdom on the African continent.

Heavenly Empire pursues intelligent economic policies in relation to its African "colonies". In 2009, the PRC reset the import duty on 95% of goods from the poorest countries of the Black Continent. In exchange, the Chinese get access to the bowels.

Do not think that only savages live in Africa. In the above-mentioned Namibia, in Liberia, Cameroon, and Mozambique, they are expressing their dissatisfaction with the massive deforestation, the wood of which is used to develop the Chinese furniture industry.

In Zambia, workers in Chinese copper mines are rioting. Even in South Africa, a member of the BRICS, Chinese cheap textiles have undermined the position of the local textile industry. However, we add that South Africa is admitted to BRICS at the insistence of China. This can also be called a kind of “exchange.” China gives the characters, and gets a real benefit. Skillful manipulation of consciousness in a postmodern society.

Alexander Bondarenko cites material from the Financial Times, written by the General Manager of the Central Bank of Nigeria, Lamido Sanusi. The author calls on African countries to reconsider the "romantic" attitude towards China.

“China buys raw materials from us and sells goods to us. But this is precisely the essence of colonialism, ”he writes. - The epoch of the Non-Aligned Movement, which united us after the break with the metropolises, is over. China has ceased to be the same developing country - now it is the second economy of the world, capable of the same forms of economic exploitation as the West. His economic policy contributes significantly to the deindustrialization and underdevelopment of the continent. ”

According to the same "Financial Times", from 2000 to 2012. African countries trade with China grew 20 times and reached 200 billion dollars. However, the share of industrial production in the continent's GDP fell from 12,8% to 10,5%.

A month ago, the Chinese were pleased with Sudan and South Sudan - those places on the map of Africa, where the expansion of the Celestial Empire is noticeable since the days of the united Sudan. Sudanese oil minister Awwad Ahmed Al-Jaz, in talks with a representative of the China National Petroleum Company, said: “Some time ago, South Sudan resumed oil production at its fields, from where oil would reach the Heglig reservoir ...” Advis.ru writes that “black gold” from South Sudan is expected to reach world markets by the end of May.

Thus, the African continent appears to us as the end point of the raw material expansion of both China and Europe. Ahead - a serious struggle for resources.

Observed and commented on Oleg Chuvakin
- especially for topwar.ru
Ctrl Enter
Noticed a mistake Highlight text and press. Ctrl + Enter
We are
Turkey: fighters for democracy came togetherMali: gold and a thousand French
30 comments
Information
Dear reader, to leave comments on the publication, you must to register.