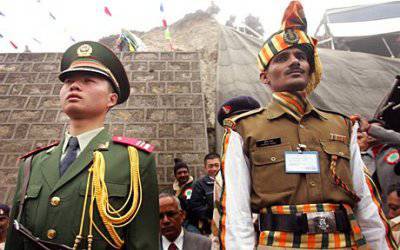 5 May India and China withdrew their troops from the disputed territory in the Himalayas. The decision on the withdrawal of troops was made at a meeting of the commanders of the border detachments, said "Lenta.ru" with reference to the Reuters agency. The conclusion was made at the same time: the Indian military personnel moved a kilometer inland from the position they occupied from April 16, and the Chinese military also left the position they occupied from April 15.


Short история The incident is as follows: on April 15, India announced that about three dozen Chinese soldiers set up camp in the highland region of Ladakh (northeast of Jammu and Kashmir), and the next day Indian soldiers stood on the site a hundred meters from the Chinese camp.

The formal border in Ladakh, actually divided between India and China, has not yet been laid. Therefore, both China and India can assure the world community that the “enemy” has invaded their territory.

Andrei Rezchikov, Ekaterina Yermakova (newspaper "Sight") cite in their material the opinion of experts who believe that China, the first to send soldiers to the disputed area, showed readiness for a peaceful resolution of the conflict.

India and China dispute a stretch of mountainous territory in the north of Kashmir, as well as almost 60 thousand square kilometers in the northeastern state of Arunachal Pradesh. Sergei Mikheyev, head of the CIS Department for Political Technologies, explained to Vzglyad correspondents that the disputes over the territory are of fundamental nature for China: “This is evident from their conflict with Japan over the Senkaku Islands. The islands are actually very little, but the Chinese are very sensitive to this topic. ” The analyst also noted that "now the Chinese feel like active political players, this feeling definitely pushes them."

Amid provocations from Beijing, the Indian line of conduct may seem soft. The difference in the behavior of the parties, explained Comrade Mikheyev, must be sought in political culture: “Such minor provocations are in the style of the Chinese since the 1960's.”

The expert considers the territorial conflict for the Damansky peninsula to be an example of such an approach. In addition to the actual fighting, the Chinese organized demonstrations, placed posters along the border.

The Chinese military, according to the Indian press, demonstrates ingenuity in provocations. In 2012, two Chinese soldiers infiltrated into the Kumar sector, southeast of Ladakh, and destroyed an old Indian army bunker. On the disputed territory, scouts wrote on the walls and rocks: "You are in Chinese territory." At the same time, "propaganda" was conducted from the air: Chinese aircraft penetrated the airspace of India and dropped leaflets, food, cigarettes.

Alexei Maslov, head of the department of oriental studies at the Higher School of Economics, reminded that China is conducting a major geopolitical project: “China is building a new world - parallel to the US world.” By sending its military to the disputed area, China has shown that it has not forgotten anything and is still ready to defend its borders. But after the demonstration of power, he took the soldiers, showing that he was aware of the need to resolve conflicts.

Comrade Maslov recalled that before the BRICS summit in March 2013, the Indian authorities published a report, where they acknowledged their backlog from China, including in the military field. The Chinese army in the disputed area is well mobilized. China provides its own army, but India is the largest buyer weapons. According to the expert, Delhi’s peace loving has a pragmatic meaning: after all, the outcome of the military confrontation in this region would be predetermined.

Moreover, in India social problems, including ethno-confessional ones, are increasing. “It would not be in the interests of the ruling party to unleash a conflict on the border,” said Maslov. “India would not have been able to repay such a regional conflict.”

Hilaria Maria Sala ("La Stampa"; source of the Russian-language text - "Inopressa") cites an excerpt from a joint declaration signed by Indian Prime Minister Manmohan Singh and his Chinese counterpart Li Keqiang: "Countries will not allow their territories to be used for hostile activities towards each other." And another fragment: "Both countries retain the right to choose their own path of political, social and economic development, while the fundamental human rights will take their rightful place." The journalist quotes further: “India and China have historical opportunities for economic and social development, and the implementation of this task will serve the development of peace and prosperity in Asia and in the world. There is enough space in the world for the development of India and China, and the world needs the joint development of two countries that will become partners, but not rivals. ”

Nevertheless, not everything is as beautiful as it is written in the declaration. The results of a survey of Indian public opinion, the journalist writes, show that the parties have to overcome many obstacles. 84% of respondents believe that there is a threat from China. The most beloved country of the inhabitants of India is the United States, but their “love for China” on the 10-scale is estimated to be only four.

According to analyst Sergei Strokan (Kommersant), despite the "reset", the prospects for relations between Delhi and Beijing are very vague. The rivalry between the two members of the BRICS is becoming more pronounced.

“Both sides agreed to restore the status quo that existed before 15 in April of this year,” said Foreign Ministry spokesman Sayed Akbaruddin. His Chinese counterpart, Hua Chunin, explained: “After the border confrontation, China and India ultimately showed restraint and demonstrated a constructive approach.”

But observers estimate the prospects of the restart in relations between Delhi and Beijing rather restrained.

Indian political analyst, vice president of the Observer Research Foundation, Nandan Unnikrishnan told Kommersant: “This is a temporary detente. Under the new leadership, China is pursuing an increasingly aggressive course towards not only India, but also other Asian countries. The territorial disputes arising today are just the beginning. ” According to the expert, in the future, the Indo-Chinese relations will be divided into spheres: in some areas they will cooperate, in others they will compete.

Vladimir Skosyrev ("Independent newspaper") recalls that recently the head of the Chinese government, Li Keqiang, called for a climate of trust with India. Fearing that the United States wants to draw it into the anti-Chinese alliance, the guest proposed to increase investment in the country and open doors for Indian exports. The Premier of the State Council of the People's Republic of China during his stay in Delhi emphasized that India became the first country he visited after taking office this year. “Based on deeper mutual trust, our two countries can deepen mutual understanding and build a new type of relationship, promote the successful development of China and India. This will be a real blessing for Asia and the world, ”the premier said.

Chinese media write about the desirability of friendly relations between the "dragon and the elephant." The Communist Party press organ, the Global Times, reports that the West deliberately fanned the hype around the recent conflict between the Indian and Chinese military: "The West is interested in differences between China and India ... China will suffer damage if India begins to pursue the same policy towards China like Japan and the Philippines. ”

Meanwhile, Tatyana Shaumyan, head of the Center for Indian Studies at the Institute of Oriental Studies of the Russian Academy of Sciences, recalled in an interview with NG correspondent that “the border talks have been held between the two powers since 1981. China makes a claim to the territory in 136 thousand square kilometers, which includes the Indian state of Arunachal Pradesh. At the same time, the Chinese actually captured more than 30 thousand square kilometers in the western sector, in the Aksai-Chin area. ” These lands are highland and sparsely populated, and for both powers control over them is more a matter of prestige.

During the recent meetings of representatives of India and China, a compromise deal was discussed: India recognizes China’s claims in the western sector, and China recognizes Arunachal Pradesh as Indian land. But this turned out to be an unacceptable option.

The three-day visit of the new Premier of the State Council of the People's Republic of China to Delhi, writes Sergey Strokan (Kommersant), was not accompanied by the signing of important political or trade and economic agreements, and was perceived rather as “a forced handshake through the Himalayas after the recent war of nerves and muscles along the so-called line of actual control (de facto - border length of about 4 thousand km)” .

“The fact that the parties have agreed to negotiate is good news. But there are no guarantees that these efforts will yield positive results, Nandan Unnikrishnan told Kommersant. - After all, before the negotiations on the border there was no movement. And today, the real reason for Beijing’s goodwill gesture was unwillingness to thwart Li Keqiang’s visit to Delhi. ”

Sergey Vasilenkov (Pravda.ru) indicates that India will not be able alone to "fight with China", and therefore Delhi has been cooperating with Washington, and he has long wanted to limit China's influence in the world.

The Chinese opposition to the United States, and therefore to India, is indirectly indicated by the fact that Pakistan was the next item on Li Keqiang’s foreign tour. The main purpose of the visit, notes S. Strokan (Kommersant), - strengthen relations with the country perceived by Beijing as a key springboard for deterring the US and India.

The Chinese prime minister said: “I want to confirm China’s strong support for Pakistan’s efforts to preserve independence, sovereignty and territorial integrity.” Experts interpreted this statement as a stone in the garden of India - the main antagonist of Pakistan, and at the same time the United States, continuing to launch air strikes at Pakistani territory as part of the so-called fight against terrorism.

The agreements reached during the visit to Pakistan, the analyst notes, will give a new impetus to the development of the strategic deep-water port of Gwadar, located in Pakistan’s Balochistan and in February transferred to the management of the company Chinese Overseas Port Holdings Limited.

Indian political analyst Vinay Shukla told Kommersant: “By developing the infrastructure of Gwadar and demonstrating willingness to finance energy projects and, in particular, the construction of an oil and gas processing complex, Beijing expects to receive a strategic naval base in the Persian Gulf. This will give him additional leverage to deter the US and Indian Navy. ”

Thus, bloodlessly demonstrating military force and at the same time skillfully maneuvering diplomatically, China continues to focus on global expansion. For good reason, the Celestial Empire is the geopolitical “goal” of Washington, publicly voiced by Barack Obama in early January 2012. As for India, it is too early to place its border conflicts with the PRC in the historical archive.