The Pentagon has requested 79,4 billion dollars to support US forces abroad in 2014 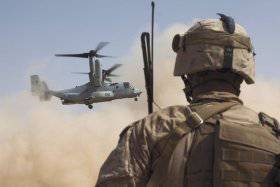 The US Department of Defense sent a request to Congress for the allocation of FN 2014. funds to finance the operations of the armed forces abroad OCO (overseas contingency operations). In total terms, these costs are about 7 billion less than in the last fiscal year.


According to Pentagon press secretary George Little, the budget request reflects the plans of the Ministry of Defense to withdraw troops from Afghanistan over the next year or two years, since in 2013 f. 68 ths. military should be displayed, and in 2014 f.g. - 38400 military personnel.

According to the current plan for withdrawing troops from Afghanistan, there will be about 60 thousand soldiers on its territory for the duration of the fighting during the warm period of the year, and by November 2013 the number of US forces in Afghanistan will decrease to 50 thousand, and by February 2014 g - up to 34 thous. military personnel.

All US military forces will leave Afghanistan by the end of 2014, after which only national units supporting 352 thousand will remain in the country.

Total on 2014 f.d. The Pentagon is asking for 526,6 billion dollars from Congress. However, this request was made without taking into account the sequestering mechanism stipulated by the requirements of the budget control law from 2011, according to which the defense ministry can only receive 475 billion dollars, since the current request for 52 billion dollars exceeds the established limit of funds.

Ctrl Enter
Noticed oshЫbku Highlight text and press. Ctrl + Enter
We are
Russia firmly occupies a place in the global arms market 2 and will maintain its position in the foreseeable future.Armored Vehicles Market in the Middle East in 2005-2012 and forecast for 2013-2016
Military Reviewin Yandex News
Military Reviewin Google News
18 comments
Information
Dear reader, to leave comments on the publication, you must to register.