23 May 2013
14
In previous articles on Bulgarian pistols, two models were discussed. weaponswhich clearly show that Bulgarians are perfectly able to copy both other samples and to create their own, and with a rather complex structure, rarely used by weapon manufacturers. So, an example of how well the Bulgarians can copy, is their version of the Makarov pistol under the designation P-M01, created by the company Arsenal. But this is not the only copy of a weapon made in Bulgaria; in addition to this gun, others were also copied. Let's try to get acquainted with another sample of Bulgarian pistols, this time already produced by another company, namely Arcus. 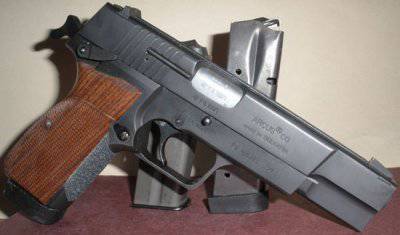 I think that no one will argue that Browning is one of the brightest representatives of firearms designers, and the gunsmith did not focus on one class of weapons, but created and developed a wide variety of samples. Having made a huge contribution to the development of firearms, the designer left behind a huge number of models, many of which have not lost their relevance to this day, while others have served as the basis for creating new designs. Browning's most famous development pistol is the Colt M1911. However, there is a later version of the weapon is not less well-known, namely the gun High Power. This gun is, in fact, the latest weapon that was created by Browning, but if you look only at the years of release of the gun. In fact, Browning has long been engaged in the modernization of the automation system, which is used in the M1911, in order to reduce the cost of producing weapons and reduce the number of parts that it used. The result of the work of the designer was the replacement of the locking larva, on the tide under the chambered chamber with the shaped neckline, into which the pin set in the frame of the weapon passed. Unfortunately, Browning did not live until the release of this gun, but this did not make the weapon bad. It was the gun that they decided to create at Arcus. 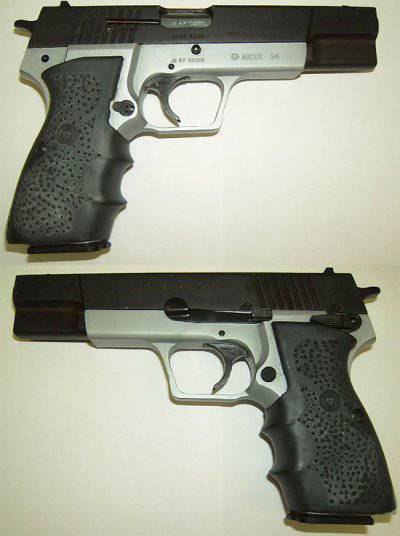 Naturally, full copying would not be the most reasonable thing, since by no means could they have fought with FN Arcus. But the company could improve the weapon, at least outwardly, in accordance with its ideas of beauty and the latest trends in weapon fashion, which was done. First of all, it should be noted that, according to the manufacturer, the gun had to “cling” precisely with its appearance, because several versions of weapons were created in various finishes. And a little later they made a compact version of the pistol, although in reality it was not so compact, they just slightly trimmed the barrel and shortened the cover-slide, changing its shape. Initially, the gun was made with wooden or plastic overlays on the handle, which differed little from the original, and subsequently made the handle more comfortable by making recesses for the fingers in front and also covering the handle with non-slip material. The changes concerned the casing-shutter, which began to have a "square" look, the back side became flat and straight. The safety bracket also received a rectangular shape and a deflection in the front, for a more comfortable holding of the weapon when shooting with two hands. It is noteworthy that the slide gate lever, which is the main element by which you can recognize the weapon, remained unchanged, but the fuse switch changed its shape, although it remained in its original place. In addition, the fuse switch is duplicated on the right side of the weapon. The store eject button began to protrude more from the weapon, which, however, had no effect on convenience, nor did it cause problems because of its sufficient rigidity. The sights of the pistol were also changed. The fly became longer and changed its shape, the pillar became removable, installed on the casing-slide on the dovetail seat, so if desired it can be replaced with a more convenient or adjustable one, although it’s not a fact that this procedure will be possible without natfilya On the other hand, High Power also had a variety of sights, including with the entire interchangeable. 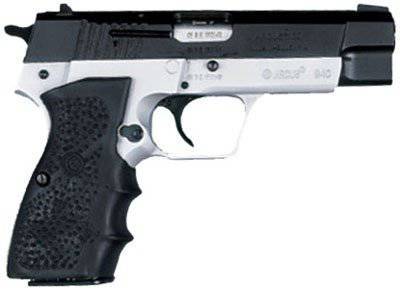 The weapon works as follows. In its normal position, the bore is locked due to the protrusions on the barrel engaging with the shutter casing. When fired, the barrel and the shutter-casing begin to move backwards together, while the finer cut in the tide under the chamber begins to interact with the axis of the shutter lag lever, which leads to a decrease in the barrel's apparent portion and, as a result, the shutter-casing disengages. The barrel is braked in a twisted state, and the bolt continues to move backward, removing the cartridge case and throwing it through the window to eject the cartridge case. When the cover moves backward, the return spring is compressed, and the trigger of the pistol is cocked. Moving under the action of a rectifying return spring forward, the shutter-casing takes a new cartridge from the magazine, inserts it into the chamber and rests against the breech, pushing the barrel forward. Due to the interaction of the figure cutout in the tide under the chamber and the axis of the bolt lag lever, the breech block rises, and the barrel engages with the gate casing, which ensures reliable locking of the barrel bore. 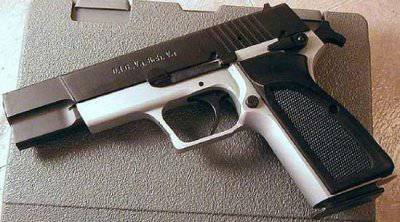 The weapon has a total length equal to 203 and 186 millimeters for a full-size and shortened model, the barrel length is 118,5 and 101,5 millimeters. It feeds a gun from stores with a capacity of 13 or 10 cartridges. The weight of the weapon is 970 grams for the full-size version and 920 grams for the compact version.

Naturally, at the beginning of the release of this pistol, a lot of problems were discovered, but they were all rather quickly resolved, which resulted in a simple, unpretentious, accurate and cheap pistol for relatively powerful ammunition. Even though this is only a copy of a weapon, it cannot be underestimated, since this sample gave the Bulgarian designers experience in using an automation system with a short barrel stroke, so copying can be very useful.