23 May 2013
23
Lee-2 is a Soviet military transport aircraft, the mass production of which was established in Tashkent in 1942 year. The aircraft was built on the basis of the passenger version of the PS-84 (1939 of the year), which in turn was a licensed copy of the American Douglas DC-3. In the USSR, this aircraft was produced before the 1952 year. During this time, managed to collect more than 6 thousands of aircraft. Lee-2 (PS-84) was actively used during World War II. The last aircraft of this type in the USSR were decommissioned only at the end of the 70-s of the last century.


In order to begin the story of this famous aircraft, you must first travel back to the USA at the beginning of the 1930s. During these years, the Douglas company began work on building an airplane to meet the requirements of TWA, which wanted to receive a passenger twin-engine aircraft, which was supposed to compete with Boeing-247. Douglas did an excellent job and the 1 on July 1933, the DC-1 (Douglas Commercial-1) made its first flight. Less than a year after that, the 11 of May 1934 of the year, the DC-2 aircraft took off, which a week later the TWA company began using on the New York-Los Angeles route.

The first flights began to bring good profits, which prompted Amerikan Airlines to order from Douglas an improved and more capacious version of this aircraft, which was planned to be used as a flying sleeper on airlines within the United States. The new aircraft, which absorbed all the most advanced technologies at the time, took off on December 17 1935 in Santa Monica. The new machine has received more powerful engines - Pratt and Whitney Twin Wasp R-1830 1000 hp The aircraft had an increased capacity and capacity. He could take the 24 passenger or 16 berths. Initially, the car was known under the abbreviation DST (Douglas Sleeper Transport), but later it became known as DC-3. 21 May 1936, the aircraft received a certificate of airworthiness. 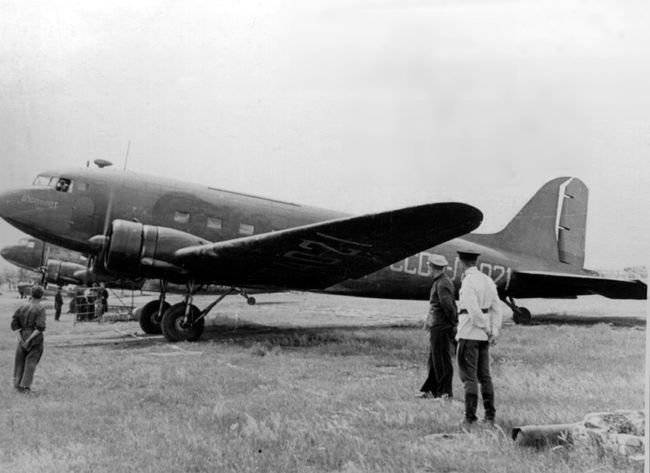 The popularity of the aircraft was growing rapidly, it was widely used in various countries, and the American military also showed interest in the car. Transport military aircraft manufactured in the interests of the US Army are designated C-47. A number of factors contributed to the popularity of aircraft around the world - simplicity of design, low price, the ability to use the aircraft even from unprepared airfields. All this made the life of the aircraft very long and intense.

A certain amount of DC-3, along with a license for their release, was acquired by the USSR. At the same time, despite the purchase of a license, the introduction of the machine into production turned out to be rather laborious. The thing was that before the launch of the release of the aircraft, all the technical documentation had to be transferred to the metric system of measures, after which all the drawings were reworked and the strength calculations were calculated using the new one. Along with this, it was necessary to take full account of the possibilities of the Soviet aircraft industry. The work of translating all the drawings of the aircraft was successfully decided by a team of Soviet designers under the direction of V. M. Myasishchev. In the manufacture of this aircraft for the first time in the USSR, the plasma-template assembly method was used.

The first aircraft assembled in the Soviet Union received the designation PS-84 (according to the manufacturing plant number), and later Li-2, by the name of B. P. Lisunov. Serial production of aircraft PS-84 in the USSR was deployed before the end of state tests. By the end of 1939, the assembly shop in Khimki near Moscow managed to leave the first 6 aircraft. Shortly thereafter, the 124 plant in Kazan was connected to the aircraft assembly, but only 10 machines were manufactured there. With the appearance on the PS-84 aircraft tracks, the indicators of the regularity of movement of aircraft and payload have significantly improved. And although the pace of construction of the aircraft lagged behind the planned, by the beginning of the war the civil air fleet (GVF) had in its composition 72 aircraft of this type. 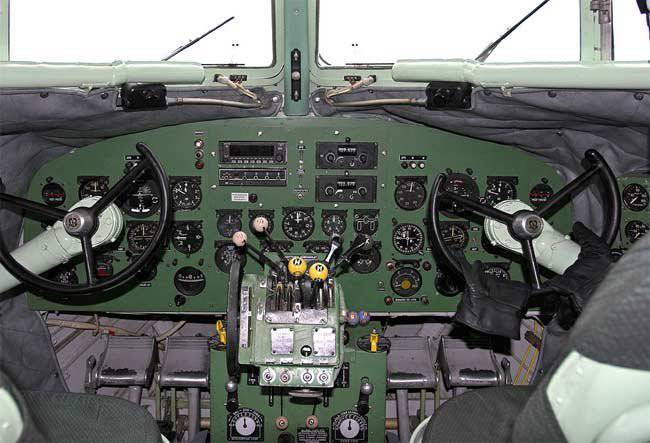 Late in the fall of 1941, when the fascist German troops reached the nearest approaches to the capital, the 84 plant, like many other industrial enterprises, was evacuated. This process took several months and the aircraft continued to be handed over in Moscow almost until the end of the year, in total more than 230 PS-84 was built. The release of the aircraft was again resumed in Tashkent on the basis of the 34 aircraft factory. At the same time, the establishment of production went on here quite difficult, since many Moscow specialists of the enterprise went to protect the city, and women and children, who did not have the proper qualifications, took their place in the workshops.

Despite this, from the second half of 1942, the release of the aircraft began to increase steadily. In the same year, he gained his second name, under which he became widely known in our country. 17 September 1942 was given the designation Li-2 - by the name of B. P. Lisunov, who led the introduction of the aircraft into mass production in Tashkent. It should be noted that until the end of the war, the name Li-2 was used to designate only military aircraft, and only then was assigned to passenger vehicles.

The military version was distinguished from passenger aircraft by the presence of defensive armaments, a cargo bridge, which was mounted under the center section with 4 locks for hanging bombs or cargo, and also replacing soft passenger seats with folding wooden ones. The aircraft could carry up to 25 paratroopers, and devices could be installed on it that allowed it to be used as a sanitary vehicle for transporting 18 lying wounded on stretchers and another 2 s sitting wounded or accompanying medical staff who were located on the side seats.

Also, the military version was notable for the possibility of transporting large-sized loads weighing up to 2-3 tons, which did not require special loading facilities and work to strengthen the cabin floor. The plane was equipped with an additional cargo door with a spare passenger door for dropping paratroopers, unloading and loading cargo. Also, the toilet, cupboard, shelves were removed from it, the inner lining was removed in the passenger cabin, the heating and ventilation was removed, and the armor set was mounted on the pilot’s and navigator’s seats.

The Soviet versions of the DC-3 were equipped with domestic engines that were not a copy of the American ones. On airplanes, an ASH-62IR engine with a capacity of 1000 hp was installed. Later, the same engine will be installed on An-2 aircraft. For better cooling of the oil, one additional oil cooler was installed on each of the two engines. To increase the combat survivability of the vehicle, a system of filling gas tanks with neutral gas from the exhaust of the operating engines was installed on it. The engine fuel supply system consisted of 4 tanks, which were placed in the center section, the total capacity of the fuel tanks was equal to 3110 liters. To facilitate the work of pilots on the plane Li-2 installed autopilot AP-42A.

On the ground, the Li-2 military transport aircraft could accelerate to a speed of 300 km / h, while the maximum speed in 320 km / h was reached at an altitude of 1760 m. The practical ceiling of the aircraft was equal to 5600 m. The aircraft could reach that height in 38 minutes. During the war, the aircraft was used not only to transport people and goods, but also as a bomber. Along with the DB-3 aircraft, it was in service with long-range bomber regiments and was often used to carry out night bomb attacks. 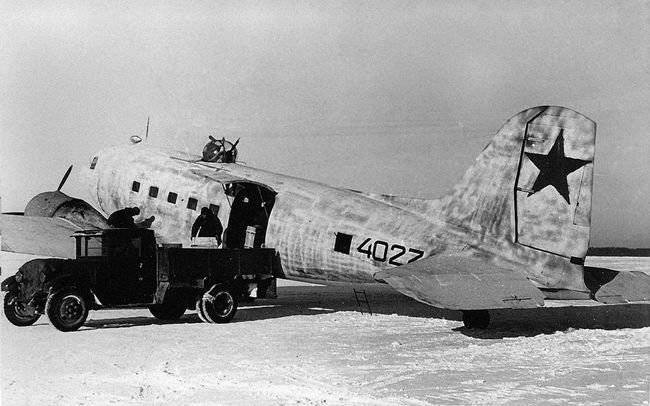 By the beginning of World War II, the Civil Air Fleet had 72 PS-84 aircraft, another 49 aircraft were used by the Air Force, 5 - by the sea aviation, several - the NKVD. In the very first days of the war, most of the civilian vehicles were transferred to separate air squads and groups. On June 25, 1941 they included 68 PS-84 and DC-3, including 51 aircraft - as part of the Moscow Special Purpose Air Group (MAGON). By July 29, there were already 3 PS-5 aircraft in 96 squads and 84 air groups. These machines took an active part in almost all operations of the initial period of the war. Aircraft were used to deliver reinforcements and cargo to the front, and transport the wounded and evacuated. Ammunition and food were delivered for the surrounded units, and reconnaissance and sabotage groups were dropped into the rear of the Germans.

Only in October 1941 of the year the Soviet “Douglass” from the composition of the MAGON transferred the 5 th airborne corps to the Orel region. PS-84 aircraft transported 5440 people and 12,5 tons of various cargoes. Also in early October, they flew to the island of Dago in the Baltic Sea, where they carried ammunition and fuel, and back - the wounded.

At the same time, under the conditions of complete air supremacy of the Germans, unarmed vehicles suffered significant losses. This happened because they were originally used during the day, flying even across the front line. Planes escaped from attacks of fighters on a low-level flight, dropping to a height of 50-75 meters. The qualification of pilots allowed to perform such maneuvers, since at the beginning of the war only the best and most experienced were sent to the front. However, such tactics led to increased losses from fire from the ground. 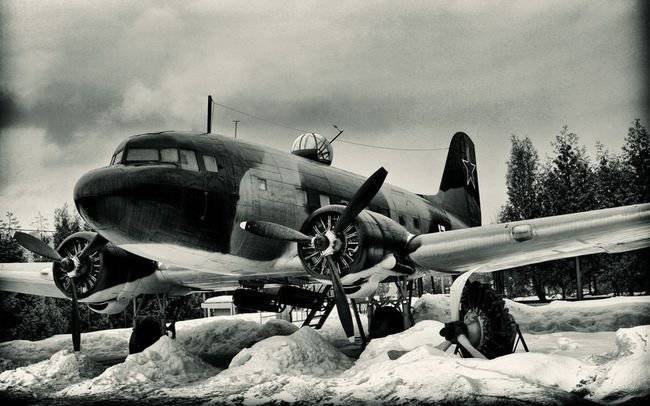 The vulnerability of the vehicles also increased due to the fact that civilian pilots were accustomed to using railways and highways as landmarks, while German troops moving along them had a large number of air defense weapons. Especially many PS-84 aircraft were damaged and destroyed over the Warsaw highway. Later, the pilots learned to choose routes that run over sparsely populated areas, disguise themselves with fog and clouds, and cross the front line at an altitude of about 2 500 meters.

Airplanes contributed to the creation of an “air bridge” in besieged Leningrad. On average, PS-84 airplanes delivered about 150 tons of various cargoes to the city, sometimes up to 200 tons per day. Most often, the crews made 2 departures per day: the first time - they took off before dawn, the second - sat at dusk. From the city they brought children and women, valuable specialists, mortars and guns, which continued to produce Leningrad factories. In an effort to save as many people as possible from the city, the pilots mercilessly overloaded the cars. Sometimes the planes took people out of the city on 35-38 per flight - almost 2 times the norm. At the same time, Soviet pilots flew even when German aircraft were holed up on the ground due to bad weather. Only the MAGON aircraft were able to take out more than 29 thousands of people from besieged Leningrad.