23 May 2013
5
It is not difficult to guess that the long-term placement of their spacecraft in orbit in the United States began to think back in the 40s of the last century. At the same time, the Americans always lacked time, and the theory ran ahead of implementation, for this reason many post-war projects were consistently rejected. The situation changed significantly when, in 1957, the USSR managed to launch the first artificial satellite of the Earth. This launch has become a very strong incentive and work has begun with renewed vigor.


In 1959, the United States adopted another very ambitious program for the construction of the MOL orbiting station - the Manned Orbiting Laboratory (habitable orbital laboratory). At the same time, this station was developed in the interests of the military, and its main goal was to deliver military cargo to orbit. Research in the field of the duration of a person’s orbit and the effects of weightlessness on his body, testing propulsion systems of a new type and testing a closed life support system were identified as secondary tasks of the station.

The US Department of Defense counted on getting its station in Earth orbit. 1 February 1964, the US Air Force Space Command created a special working group that needed to assemble and compile all the proposals for the Manned Orbiting Laboratory and form requirements for its design. When designing the MOL station, the project price was one of the main limitations for the military, which largely influenced its appearance. The fuel tank from the 2-th stage of the Titan IIIC rocket was supposed to act as a constructive basis for the orbital station. 25 August 1965, the construction of a military orbital station was authorized by US President Lyndon Johnson. Unfortunately, to this day most of the information on the project remains closed and inaccessible, and therefore it is possible to give only a rather superficial description of this project.

For reasons of cost savings, the crews were planned to use the already created Gemini spacecraft, carrying out minor modifications. MOL was put into orbit with a Titan III rocket. Launches were to be held from the spaceport at Vandenberg Air Force Base (California). The launch into orbit of the crew was planned to be conducted simultaneously with the orbital station on the Gemini-Bi spacecraft, which was docked to the station. It was planned that after the station would go into Earth orbit, the crew would open the transitional hatch and penetrate the station. It was assumed that the crews would work in orbit for at least 30 days, after which they would return home on the Gemini-Bi descent vehicle. At the beginning of the project, it was planned to carry out the first flight in 1969, but the launch dates moved many times, and by the time the project was closed, the flight date was already February February 1972. 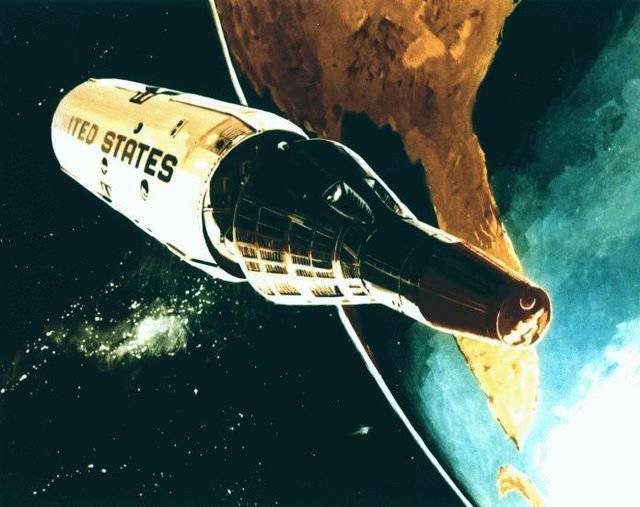 This project was divided into 2 phases. The first phase is from September 1965. At this time, evaluative work was carried out, there was a distribution of responsibilities among contractors. The second phase of the work was to begin with the qualification tests that were scheduled for April 1969. To ensure the launch of the Titan III rocket from the Vandenberg cosmodrome here 12 March 1966 began work on the construction of the launch complex SLC-6.

In June, 1964, the US Army entered into a contract to work with 3 companies: General Electric Company, Douglas Aircraft Company and The Martin Company. Each of these firms presented its own station projects with its own cost and technical characteristics. As a result, after summing up the competition, in February 1967, the main contract for the production of the orbital station was concluded with the Douglas Aircraft Company Corporation, which was engaged in the development of all station models and layouts, as well as carried out heat-vacuum and other design tests.

At the station it was planned to realize a two-component, and not just an oxygen atmosphere. This was done after the crew of the Apollo-1 spacecraft died during a fire in the cockpit. One of the main tasks of this orbital station was to conduct optical reconnaissance with the help of special equipment in the interests of the US military. The main reconnaissance element on board the station was the KH-10 camera, which received the designation Dorian and had a diameter of 1,8 meters.

Fully MOL station project was ready in 1965 year and represented the following design. The orbital station had the form of a cylinder with a full length of 12,7 meters and a maximum diameter of 3 meters. The station’s crew consisted of a 2 person, and the manned volume of a 1,3 cube. meter The mass of the orbital station was 8620 kg. At the station, a single shunting engine was installed, which had a minimum fuel reserve, which would be enough for only 255 seconds of operation. The station was supplied with electricity using solar panels and fuel cells. The estimated lifetime of the station in orbit was limited to 40 days. 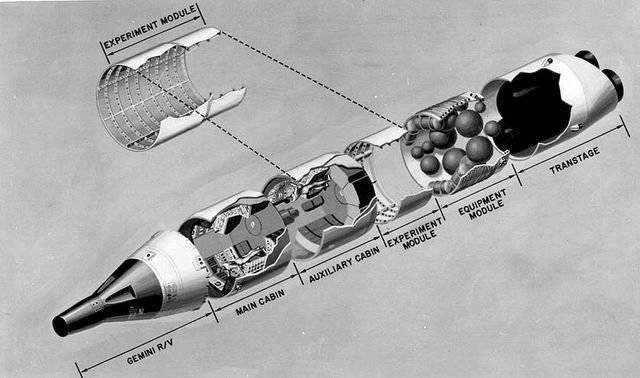 The only start on this program was 3 November 1966. On this day, the Titan IIIC launch vehicle launched into orbit the mock of an orbital station, which was an empty fuel tank from a Titan II rocket. At the same time, there is still no complete clarity on whether any standard equipment has been installed on the model. One of the tasks of this space launch was to check the heat shield of the “Gemini” descent vehicle.

10 June 1969, the American President Richard Nixon decided to close the MOL program. At the same time, 30 million dollars were spent on the project, and the price of the entire program reached 2,2 billion by the time of closing (at an initial value of 1,5 billion). The equipment left from the MOL station was transferred to American museums.

Work on orbital stations in the United States immediately received a clear military focus. In order to keep up with the probable enemy of the USSR, in the middle of the 1960-s began to work on the development of manned stations. OKB-52, led by V.N. Chelomei, joined the work on the creation of the orbital station.

The start of work on the orbital station in OKB-52 is attributed to 12 of October 1964 of the year, on this day the general designer invited the bureau staff to start work on the development of the visited orbital manned station (OPS), which was to receive a replaceable crew of the existence of 2-3 of the year. The station had to solve problems of scientific, defense and national economic importance. The UR1K booster should have delivered it to orbit. A sketch of the orbital station, or rather, the rocket and space system, which was called the "Diamond" was finally adopted in the 2 year. 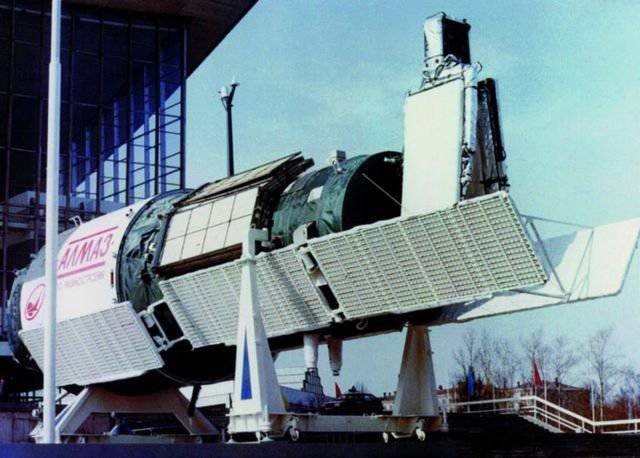 "Almaz" was conceived as a space observation post, having comfortable conditions for the accommodation and work of the crew. The station should have received an accurate guidance system and modern observation equipment that would allow monitoring the movements of the enemy’s military forces, pollution of seas and rivers, forest fires, etc. For delivery to the crew OPS, it was decided to create a transport supply ship (TKS), which was designed for the outer space launch of the same missile, UR500K. It was originally planned to equip the TKS and stations with similar return vehicles (VA), but then this idea was abandoned and the VA remained only on the transport ship.

The orbital station "Almaz" was designed for long-term work of the crew of 3-x people. Structurally, its compartment was divided into 2 zones, which could be called a zone of small and large diameters. In front of the station there was a small diameter zone, which was closed when spaced with a conical head fairing. Behind it was a zone of large diameter. The docking of the transport ships station was to be carried out from the rear end of the station, where the spherical airlock chamber was located, which was connected to the pressurized cabin with the help of a large passage hatch. A passive docking station was located in the back of the airlock chamber, and in the upper part there was a hatch for the crew to go into open space. In the lower part there was a hatch in the chamber from which capsules with research materials could be sent to Earth. OPS propulsion systems and deployable antennas, as well as 2-e large solar panels were installed around the airlock chamber. The tail part of the station was covered with a special cone-shaped shield, made of screen-vacuum insulation.

In the area of ​​small diameter there was a crew compartment, where sleeping places, a lounge chair, a table for meals and portholes for viewing were equipped. Behind the household there was a working compartment, where there was a workplace, a control panel, as well as an optical viewfinder, which allowed us to stop the run of the earth’s surface and to observe individual details, as well as a periscope device for viewing the surrounding space and a panoramic-viewing device for a wide view of the Earth . The back of the pressurized cabin was occupied by various equipment and equipment, as well as the station management system.

A large optical telescope, used to observe the Earth, was located behind the working compartment and took up space from the station to the ceiling. It was planned, having filmed sections of the sea and land, to show materials directly on board, view them and transmit the most interesting to Earth via a television channel. The rest of the film captured at the station could be delivered down on the descent capsule. 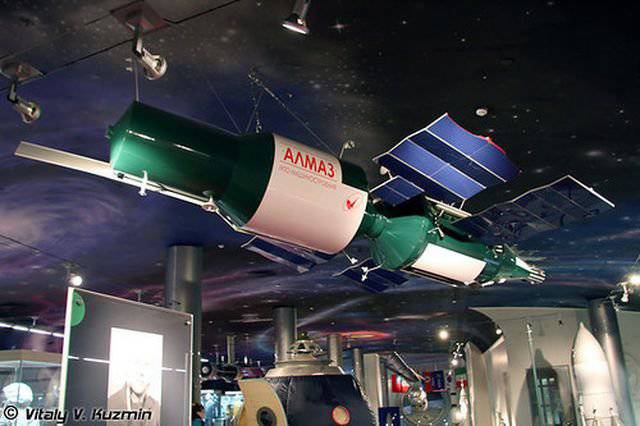 An interesting feature of the Soviet station was the installation of defensive weapons on it. On board the OPS was a quick-firing aviation gun NR-23 design Nudelman-Richter. This gun in itself was an interesting development, let alone its space use. The estimated firing range was to be up to 3 km, and the rate of fire at 950 rounds per minute. According to the creators of the gun, during ground tests at a distance of more than 1 km. a salvo from this gun cut in half a metal barrel of gasoline. When firing in space, the return on its use corresponded to a thrust of 218,5 kgfs and the station needed to be stabilized, which, in principle, was easy enough for 2 marching engines with thrusts of 400 kgfs each or rigid stabilization engines with thrusts of 40 kgfs.

The gun HP-23 rigidly fastened under the belly of the OPS. It was possible to direct it to the desired point with the help of a sight, turning the entire orbital station by remote or manual control. Shooting from it was controlled by a special software and control device (PKA), which was engaged in calculating the salvo, which would have been guaranteed enough to destroy a space target when the projectile was flying to a target from 1 to 5 seconds. At the same time, Almaz could not attack anyone. There was no sense to use a manned 20 tons station with a huge camera and other valuable equipment against half-tones satellites. But the station could defend very successfully. No automatic American satellite would have survived the fire of its gun.

Almaz moved from Whatman paper to 3 hardware on April 1973 of the year (the first launch of Almaz-1, which was officially named Salyut-2). In the future, the program "Almaz" was continued, the launches of stations and their varieties continued until the collapse of the USSR. A total of 5 stations were launched: manned 3 and automatic 2.