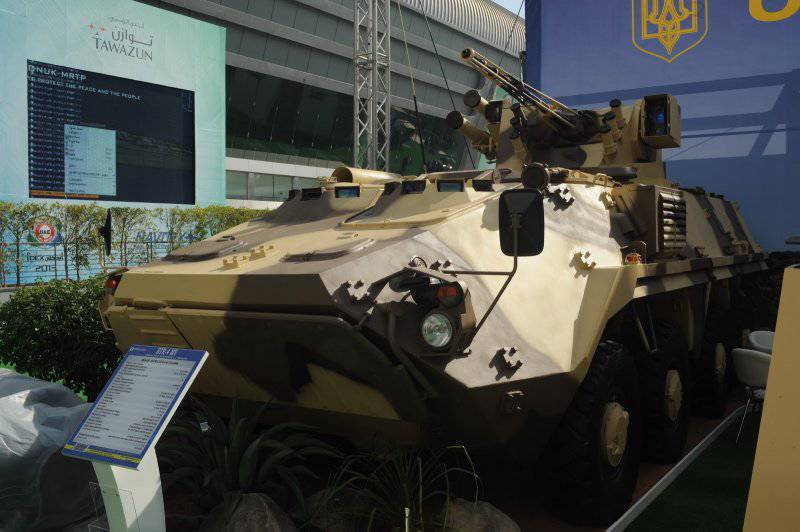 Ukrainian company "Ukrspetsexport" in the framework of the largest armory the exhibition "IDEX-2013", held in the United Arab Emirates in January 2013, presented a novelty of domestic-made armored vehicles. The new armored personnel carrier is based on the famous BTR-4, but has a number of distinctive characteristics.

The new appearance of the armored personnel carrier is the result of not only the requirements of the Ukrainian military, but also the desire of the Ukrainian manufacturer to make a worthy competition in the global arms market. Recall earlier (to be exact, last year) an armored personnel carrier of the same series - the BTR-4E was adopted by the army of Ukraine. The development of this model of light armored vehicles since the 2007 year, was engaged in the Morozov Kharkiv Design Bureau.

If in a few words to describe the basic version of the BTR-4, it is in its layout is significantly different from the armored personnel carriers that were created earlier, in particular, the BTR-60, BTR-70 and BTR-80. This car has differences with the Russian model BTR-90. In the BTR-4 armored personnel carrier, the control compartment was located in the front of the hull, while the power compartment along with the engine was located in the central part of the left, immediately behind the driver’s seat, and the landing compartment was in the rear of the hull. Such an arrangement of the machine makes it possible to transform the landing and combat compartments to create different types of support vehicles (fire, sanitary, repair and evacuation, command and staff) without altering the technical decisions regarding the placement of the transmission and power plant.

This machine is designed to transport personnel of the ground forces, as well as the implementation of their fire support in modern combat. It is supposed to use an armored personnel carrier in those units that can conduct military operations under any conditions, in particular, in the case of the use of weapons of mass destruction by the enemy. In addition, this armored personnel carrier can be used as a base vehicle for equipping units of the special reaction forces and marine corps. According to the presented characteristics, the machine can be used in any climatic conditions, at any time of the day, on roads of various surfaces and even on impassable roads.

The crew of the new machine is three people, and consists of the commander, driver and gunner, and the landing can include about seven to ten people (it depends on what kind of combat module is installed on the armored personnel carrier).

The exact weight of the armored personnel carrier BTR-4МВ is not declared by the designers. It is known that it is on the order of 17,5 tons, subject to standard and mine booking, and about 22 tons, provided enhanced booking.

The car is driven by one of the three engine models, depending on which manufacturer the customer preferred - the German Deutz, the Ukrainian ZTD, or the Italian Iveco. As for the BTR-4E, it has a three-cylinder diesel engine of Ukrainian production ZTD-3А, which has horsepower and automatic hydromechanical transmission in 400. As for the first model of the BTR-4MV presented at the arms exhibition, this machine was equipped with a German six-cylinder diesel engine Deutz BF6M1015CP, which has horsepower 450 and gives the speed of 110 kilometers per hour. The power reserve is equal to 670 kilometers.

As for the passage and maneuvering qualities, they are basically identical to those possessed by the BTR-4E. Moreover, according to the developers themselves, even after enhancing the level of booking, the new armored personnel carrier retained its buoyancy and could overcome water obstacles at a speed of about 10 kilometers per hour. It is worth noting that the number of armored personnel carriers with similar characteristics and the level of booking, while possessing buoyancy, is quite small. However, it should be borne in mind that in the event of further armor gain, it will be impossible to maintain buoyancy. In addition, in most cases, customers are not very interested in buoyancy, the main characteristics when choosing a particular model are the survivability of the vehicle and crew in a collision with firing means of defeating the enemy not only on the battlefield, but also in the conditions of peacekeeping operations.

Another distinctive feature of the new armored personnel carrier is that its ballistic protection level has been significantly increased. Thus, according to the requirements of STANAG-4269, the BTR-4МВ possesses the 5 level of protection, that is, it is able to withstand shelling millimeter 25 caliber from a distance of about half a kilometer.

If we compare the new car with the BTR-4E, then its layout in the nose section is significantly changed. In order to strengthen the reservation of the frontal part, it was decided to completely abandon the armored glass, as well as from the side doors of the driver and commander. Thus, it is possible to install additional, including dynamic and ceramic protection. In addition, according to a certain level of mine protection, the BTR-4MB has an 3 level of ballistic protection according to NATO standards, that is, it is able to withstand an explosion of a mine of about 8 kilograms in TNT. At the same time, an additional grid can be installed on the armored personnel carrier to provide protection against various types of hand-held anti-tank grenades.

If we talk about the firepower of the new armored personnel carrier, it should be noted that it is very significant. The BTR-4MV provides for the installation of various types of combat universal modules with rendered weapons, designed specifically for light armored vehicles. In particular, we are talking about remote-controlled modules "Storm", "Grad" and "Parus", BAU-32, as well as combat modules of foreign production (depending on the wishes of the customer). As for the first model presented in the United Arab Emirates, the Parus module was installed on it, consisting of a ZTM-1 cannon of 30 caliber of millimeters, a coaxial machine gun, an 7,62 caliber of a millimeter, an AG-17 automatic grenade launcher and an anti-tank missile system Barrier .

Note that the combat module can control both the shooter and the commander with the help of electromechanics. Observation and aiming can be conducted using low-level opto-electronic television devices. In addition, a separate panoramic surveillance device, the Panorama-2P target designator, is provided for the commander.

Together with the complex "Sail" in the landing compartment can fit 7 people. The driver and commander can land and disembark either through the stern, like a landing party, or use the upper hatches. On the right side between the control and landing sections there is a small passage. For orientation and analysis of the situation, the commander may use a circular chamber mounted on the tower. The image is transmitted to the monitor installed in front of the commander.

And finally, another feature of the new BTR-4MV armored personnel carrier is the new aft part. Instead of a door with a vertical middle jumper mounted on the BTR-4E, there is a special ramp that is lowered across the entire width of the landing compartment, which makes it possible to significantly speed up the process of landing and disembarking the landing force. In addition, it allows the use of an armored personnel carrier as a carrier of bulky goods, in particular, additional ammunition, weapons and spare parts. The ramp also has an additional door that can be used for landing and landing troops.