Russia and Iran can not defend themselves in Syria, but counterattack 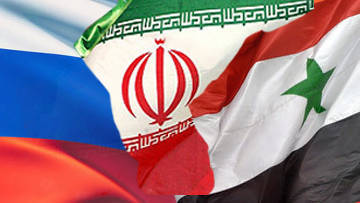 By the will of fate, Russia has recently defended itself, defending its interests and its allies. In the face of a united coalition of invaders against Syria, one should not think only about defense. This can lead to a loss of political initiative and a final defeat in the conflict.


Syria is under pressure from countries that themselves have many problems. In addition to helping Syria itself, it makes sense for Russia to think about how to use the problems and contradictions of several countries that make up this strange coalition and only recently united against Syria Turkey-Israel-Arab countries of the Persian Gulf (Saudi Arabia, Qatar, Bahrain and others).

Turkey, which only recently had a rather friendly attitude towards Russia, has now become its geopolitical adversary. Turkey is a fragment of the Ottoman Empire, and on the territory of Turkey, along the borders of Turkey, many nations live in neighboring countries, and not all of them are satisfied with Turkish nationalism.
I do not want to say the words about Kurdistan, which have filled the teeth with teeth for many years - the current Turkish authorities are the only ones who are seriously trying to solve this problem. This old trump card against Turkey is not working now. Negotiations are under way with Ojallan and other Kurdish Turkish leaders. But in addition to the Kurds in Turkey there are several other minority groups, and some of them live on the border with Syria. Their leaders are negotiating with both Assad and Erdogan.

On the eastern border of Turkey, not everything is so cloudless either. Periodically, conflicts arise on the border of Turkey and Iraq, as the Turkish army tries to suppress Kurdish resistance. The Iraqi government, which includes Kurds, is extremely negative about the shelling and invasion of Turkish troops on its territory. On the western border of Turkey, the Cyprus-Northern Cyprus problems are not resolved. In this area, large reserves of natural gas have been explored, and deposits are located in the undivided territorial waters of Lebanon, Northern Cyprus, Cyprus and Israel. Not everything is in order in Turkey’s relations with European countries. As for the military confrontation with Russia, a direct Turkish military attack on Syria can be prevented by a short march of a small compound of the Black Sea ships fleet to the largest Turkish city on the shores of the Bosphorus.

Saudi Arabia is a large state only by area. The Saudi Arabian army has low combat capability in real conflicts, as it turned out in 1991 during the Iraq conflict with Kuwait, and later during the conflicts with Yemen. The population of Saudi Arabia is 21 million, the population of Yemen is 24 million, and the Yemeni army, hardened in a continuous civil war, despite the backward technology, is more capable than the Saudi one. There are plenty of reasons and reasons for conflicts between the two neighboring countries. Now the frightened authorities of Saudi Arabia are building a fence on the border with Yemen.

In Saudi Arabia itself, too, is restless. The aged king has a huge number of relatives. The heirs die before the 89-year-old king, who is also about to go to another world. What will happen after his death, what policy will the new king pursue, will the unity of this country be maintained? In eastern Saudi Arabia, there are Shiite Arabs, who make up a significant proportion of the population in several districts, periodically opposing certain government actions.

One of the states of the anti-Syrian coalition is a small Bahrain, in which the majority of the population (over 75% of the population) are Shiites. The ruling royal dynasty is Sunni. The Shiite uprising that flared up in 2011 was brutally suppressed by the authorities with the help of the Saudi Arabian army. Bahrain’s oil reserves are running low.

Perhaps the leaders of Russia and Iran, in addition to direct military assistance to Syria, can also think about increasing direct military assistance to Yemen, and the leaders of China to Sudan. Perhaps you need to think about improving relations with the new Iraq. It is possible that reducing Russian tourism and weakening the degree and degree of confidence in Russian-Turkish relations can help Turkish leaders to think about their wrong geopolitical choice, in which Turkey plays a subordinate role to the West and the Gulf countries.

One of the most important conditions for the stabilization of the situation in Syria is to gain time and close the borders to deprive Syrian militants of support from the outside.

Another factor that is associated with gaining time is the possible demise of the King of Saudi Arabia.

Perhaps you need to establish some contacts with the leaders of the regions and tribes of Saudi Arabia, who may have their own interests. Much of the oil production in Saudi Arabia is concentrated in the east of the country, in the area where the Shiites live, but the central and western regions of the country enjoy all the benefits of oil.

Geopolitical opposition is multifactorial, and for successful opposition to a strong opponent or a strong coalition, sometimes attacking or counterattacking is more advantageous than just a defensive strategy.