USA in the Balkans: the operational phase of establishing military control 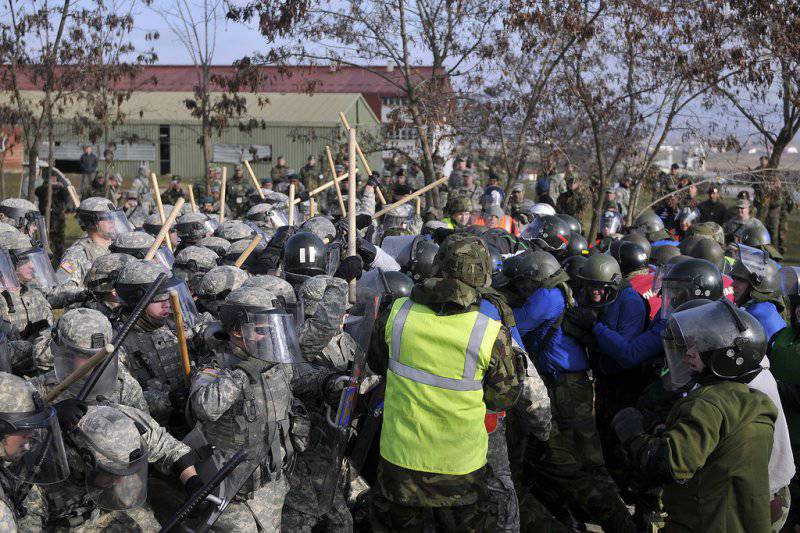 Serbs in the north of Kosovo, who firmly reject the Brussels Agreement, which turns them from Serbian citizens into “Kosovars” against their will, will soon find themselves alone with military force designed to guarantee the implementation of the agreements in Brussels. At the end of May - early June, the 525-I American commando-reconnaissance brigade arrives on the territory of the former Serbian region, which now holds three-week exercises at the Hohenfels training ground in Germany, fulfilling the tasks that it will have to solve in Kosovo. These tasks include planning combat operations, eliminating unrest, evacuating the wounded, and interacting with civilians.


The 525 Brigade is the first division of the regular US Armed Forces in KFOR for the last ten years ... Its military personnel will be deployed in the eastern part of the KFOR sector (Kosovska Kamenitsa, Vitina, Gnjilane, Uroševac, Shtimle, Kachanik and Shtrpze). As part of the brigade, the 1 th battalion of the 38 regiment, which was recently planned to be transferred to Afghanistan, is being deployed. Together with KFOR and EULEX (EULEX is a special EU mission consisting of 2000 civilians and law enforcement officials), the Americans are planning to ensure freedom of movement, that is, dismantle the Serb-built barricades that block access to Kosovo from the Albanian police and special forces. (1)

The reliable rear of the military units sent to the Balkans is the Bondsteel base, located in Kosovo near the town of Uroševac. It is the largest American base in Europe (named after James Bondsteel, a Vietnam War veteran), allowing control of the waters of the Mediterranean and Black seas, as well as routes leading to the Middle East, North Africa and the Caucasus. The base was built in record time, in July-October 1999, immediately after the completion of the NATO bombing of Yugoslavia. It is now the center of KFOR / NATO's eastern sector of responsibility, covering an area of ​​about 800 hectares. On the territory of the base there are 300 objects (airfields, hangars, infrastructure that provides the basing of helicopter, artillery and tank parts, shops, cinemas, gyms, libraries, two churches, the most modern hospital in Europe); the base is covered by a 25 km road network and surrounded by 14 km of earthen and concrete barbed wire fences and 11 watchtowers.

The operational capabilities of the Bondsteel base go far beyond not only Kosovo, but the entire Balkan region. Logistics support can be provided by the airfields of Tirana, Pristina, Bologna, Dracha, Skopje, Tuzla.

The Bondsteel base is also designed to perform a security function along the route of the trans-Balkan oil pipeline - a US-British project designed to supply oil from the Caspian region through Bulgaria, Macedonia to the Albanian port of Vlora on the Adriatic coast and then supertankers to Western Europe and the USA. A characteristic detail: the construction of the Bondsteel base was carried out by the same Halliburton company (former US Vice President Dick Cheney is closely associated with it), which is supposed to build the Trans-Balkan oil pipeline (2).

After visiting the Council of Europe Commissioner for Human Rights, Alvaro Hill Robles, at 2002 in Bondsteel, he described the base as “Little Guantanamo”. According to reports, the base is a transit point for the movement of prisoners.

In Washington’s plans, the Balkan region should be incorporated into Euro-Atlantic structures completely and without remainder. The US State Department is demonstrating a firm conviction in the inviolability of its Balkan conquests and the "fastening" of Serbia to a new geopolitical reality, including control not only over the south, but also over northern Kosovo. Former US Assistant Secretary of State Philip Gordon (now Special Assistant to the President of the United States, White House Coordinator for the Middle East, North Africa and the Persian Gulf) has repeatedly stressed that "the United States continues to firmly support the sovereignty and territorial integrity of Kosovo", regardless of which government exists in Belgrade (3). As early as July 2012, F. Gordon clearly explained the strict demands of the US administration to Serbia. “Neither we nor the European Union,” he said, “do not expect Serbia to recognize Kosovo, it should not do this. However, Serbia must recognize the reality of a democratic, sovereign, independent multi-ethnic Kosovo within its present borders. And finally, Belgrade must stop supporting the illegal parallel system of security and justice in northern Kosovo and ensure freedom of movement for all ... ”(I have highlighted. - A.F.) (4)

During the visit to Belgrade on 19-20 in May, German Foreign Minister Guido Westerwelle was determined that Serbia would set a date for the start of EU accession negotiations only after the implementation of the Brussels Agreement, and within the next few weeks (5). An obstacle on this path is the unwillingness of the Serbs of the north to dissolve in the drug-criminal Kosovo-Albanian education. However, the “tool of persuasion” of stubborn Serbs in the form of units of the 525 of the US armed forces is already ready to be sent to Kosovo.

Ctrl Enter
Noticed a mistake Highlight text and press. Ctrl + Enter
We are
"Islamic state" in the Balkans?“Independent Kosovo”: global pathological crime
20 comments
Information
Dear reader, to leave comments on the publication, you must to register.