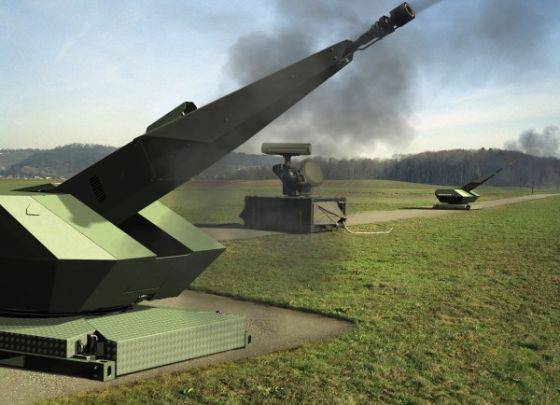 The demonstration took place at the site of the company Ochsenboden in Switzerland.

As reported by the weekly Janes Defense Weekly, the Mk 2 cannon is a remote-controlled anti-aircraft gun (caliber) 35 mm, created by Rhine Metal in the period 1992-2012. based on the Revolver Gun Mk 1 storage option, taking into account the experience gained in the development of the C-RAM anti-missile anti-missile system (Counter Rockets, Artillery and Mortar), designed to protect objects and units of the armed forces from being hit by missiles, projectiles and mortar munitions.

The Oerlikon Revolver Gun Mk 2 is primarily intended for export. According to information from representatives of the company-developer, Rhinemetal already has a contract from the first customer from the Asian region.

The Mk 2 system is a prototype that is currently undergoing qualification tests, which began in February and will be completed in June of this year.

The charger has a nominal rate of fire of 200 shots per minute, but can fire in the mode of high rate of fire 1000 shots / min. The total ammunition of the memory is 252 projectile. A typical burst when shooting is 18 shells. A charger can fire such 14 bursts once before it needs recharging, which takes 8 minutes and is performed by two military personnel.

Unlike the Mk 1 Revolver Gun system, which is a hand-operated memory device, the Mk 2 is a remote-controlled system that can integrate into a network management system and receive commands via an Ethernet / FO / DT60 network.

The memory in the standard version will be deployed as part of an air defense battery consisting of one radar and two guns, although 8 guns can be controlled from one control panel. The system has a power supply of 10 batteries with a voltage of 12 V, which provide a maximum output power of 80 kW (compared with the power supply system tank "Leopard-2" with a capacity of 7 kW). The battery charge is enough to power the gun for one day or one full charge of ammunition, while there is the possibility of reloading them.

The Mk 2 charger has a mass of 4,15 tons without ammunition and 4,6 tons with ammunition. It is slightly heavier than the MN 1 version with 3,6 t mass due to the presence of a more powerful power source and various auxiliary devices.

The charger is easily transported on standard platforms, it has a hydroplatform, which does not require strictly leveling the system when positioned.

Another distinctive feature of the new charger is the use of programmable ammunition exploded in the air. The system implements a technology that measures the muzzle velocity of a projectile and programs it to explode at a certain distance. This procedure takes 50 microseconds to the moment when the projectile comes out of the gun barrel.

Ctrl Enter
Noticed a mistake Highlight text and press. Ctrl + Enter
We are
Russia demonstrated the most promising weapons at INDO Defense-2014RAM anti-aircraft missile (RIM-116A)
11 comments
Information
Dear reader, to leave comments on the publication, you must to register.