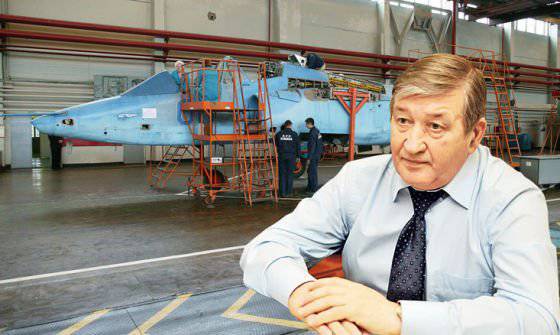 At present, the Armed Forces do not have a viable technical support system.

The plants of the Ministry of Defense included in Aviaremont OJSC will be transferred to industry and state corporations. The transfer was initiated by Defense Minister Sergei Shoigu, refusing, as he put it, "mechanics and turners". How will this affect the combat readiness of the Air Force? Anatoly Sitnov, a member of the Public Council, the Chairman of the Military Industrial Commission under the Government of the Russian Federation, and the President - Chairman of the Board of Directors of Aviadvigatory Company Vladimir Klimov - Motor Sich, Colonel-General answers this and other questions in an interview with our correspondent.

"MIC": Anatoly Petrovich, why should the head of the military department lose the structure on which the combat readiness of the Air Force directly depends?

- Shoigu was instructed to transfer aircraft repair bodies to industry. I don’t know who gave it away, the Minister of Defense only announced it. Nobody cares today about the situation with the repair. tanks, military equipment, weapons. Everyone is interested aviation factories where aircraft and engines are being repaired. Especially the enterprise in Staraya Russa, where IL-76 transport aircraft are serviced, the plant in Kubinka, which is located near Moscow, you can drive out the military and land business aviation, Yeisk bush is the south, Chkalovsky airfield near Moscow with well-established infrastructure. There is only one sense of what is happening - to pull apart sweet pieces, and then even though the grass does not grow.

"MIC": Is it just that? And the public interest? After all, there is an enormous and successful experience of the Soviet Union ...

- In Russia today the prevailing theories of the Western world, built on market relations, private capital and public-private partnership. Hence, ubiquitous outsourcing: people who earn money from the exploitation of budgetary funds deduce themselves from responsibility. They are not familiar with the former system of providing the Armed Forces, they do not have this experience.

The Americans during the operation “Storm in the Desert” in Iraq signed their own impotence: half of the tanks were stuck in the sand, there was no food or fuel. The same was in Vietnam, and today - in Afghanistan.

The Americans now began to copy the Soviet supply system, and our military - the American system: at one time they tried to form a committee of the chiefs of staffs, a single body to manage the material and technical support. Then people who had no relation to it, did not know her, came to the leadership of the army. stories, never participated in the planning. And the disorganization of the Armed Forces began.

To American copiers, I would remind you: the United States never had any experience in waging a war to defend its own territory, nor did it fight to survive. And this experience has shown the need to create a full-scale support system built by troop levels: a separate soldier, a platoon, a company, a battalion, a regiment ... With indication of the deployment and maintenance standards for levels, so that everything can be echeloned in combat areas, and in rear areas, and means of intelligence and control.

- Once upon a time there were wonderful documents: “Manual on conducting operations”, “Manual on rear support”. They painted the entire system of separation of repairs: the company has weapons master, in the battalion - department, in the regiment - company, in the division - repair and restoration battalion. All this is associated only with the restoration of performance - the replacement of finished components and assemblies. Medium repairs with the replacement of large units were already done in the association (army), overhaul - in the district. For this, specialists were trained, the necessary spare parts were stored in warehouses ...

"MIC": What happened then, when the Minister Serdyukov?

- The entire system of central and district subordination was removed from the Armed Forces and outsourced to Oboronservis. This means that the support structure is not in the control loop of the command of the Armed Forces. Well, they guessed to keep the aircraft repair system as a whole, thereby ensuring the technical readiness of aviation.

"MIC": Imagine that the entire system of overhaul and repair of aircraft weapons, engines is transferred to industry. Who will be responsible for combat readiness?

- Who will serve the crews that have completed combat missions set by the commander-in-chief of the Air Force and returned to the bases? Outsourcing? It's like asking if the soldier will feed the outsourcing? Aunt cook go to war? They propose, as Americans, to eat dry rations. This is in the desert you can eat. Try to get dry rations beyond the Arctic Circle ...

Aircraft repair will be increased and there will be no aviation readiness. Back in the 30 of the last century, the Italian General Daewoo determined that in the long run, aviation would become a decisive link in armed conflicts, providing contact-free warfare. First, energy is destroyed, then transport communications, communications and management, infrastructure and social sphere are destroyed, people rebel against power ... We have seen the implementation of this theory in practice in Yugoslavia, Serbia, Iraq, Libya, Egypt ... Nothing new has been invented yet, the old methods are being implemented with new types of weapons.

People disintegrating "Aircraft Repair" should ask the question: are we going to protect our homeland? If so, then the support system should be close to the people who exploit this technique. The return of equipment to the combat system should occur in a short time. Who is lucky to restore the equipment, for example, from Moscow to Novosibirsk, and from Rostov to St. Petersburg? But as soon as enterprises transfer to industry, so will it be. The Defense Ministry remains without technical readiness and, as a result, without the combat readiness of aviation.

"MIC": This is a matter of ensuring national security.

- Aircraft repair in the structure of the combat readiness of the Air Force occupies the main place. The fifth generation aircraft (now the 4 + generation) is a technocratic army. It requires a rich technicalization of all processes - information support, the collection and processing of information, etc. This is communication, and intelligence, and defeat, and evaluation of defeat. But at the same time there is a high risk of technical malfunctions, breakdowns, accidents, catastrophes, which implies a high level of maintenance of technical readiness.

Multifunctional, multi-element systems require a very high level of technical support. The Su-24 aircraft service 16 machines. "Aircraft repair" aircraft and weapons not only repairs, but also provides operation, maintenance, copyright, warranty repair. It was in the Air Force management repair. Now the post of deputy for armaments has been eliminated everywhere, there is only a deputy for logistical support, as in the USA. Equal footcloths to rockets. And now Shoigu and footcloths eliminates. The dissolution of Aviaremont, the transfer of its parts in directions practically deprives the Russian Air Force of ensuring technical readiness.

"MIC": What is the state of existing plants in the aviation industry?

- Of the 28 such plants, only four actually work: in Komsomolsk-on-Amur, Irkutsk, Ulyanovsk and Voronezh. The rest were thrown, because in our country 1,5 flies thousands of foreign-made aircraft. It means that domestic engines, avionics, navigation are not needed. Airfield equipment is old. We destroyed our own aircraft. Well, if 28 factories do not work, and they are given 39 more ...

"MIC": What will the industry transfer military aircraft repair plants?

- The ability to eliminate production, which they consider competitive, to get additional space for sale and budget money. Instead, we have an increase in the cost of repair by five or six times, an increase in the duration of its implementation by three to four times and several times - the time for returning vehicles to combat units. Civil aviation was killed, now it's the turn of battle.

Let Pogosyan deal with what he has. KLA does not produce IL-96 (the program is executed on less than 10%), Tu-204, Tu-204CM and Tu-214. The corporation practically abandoned the Tu-334, abandoned the Tu-324 project. Poghosyan does not make a transport Tu-330, does not want to produce An-124 and An-70 - refuses everything. If tomorrow they close the border, there will be neither Superjet nor MC-21, in which more than half of the components are foreign. Poghosyan takes the factories, but does not assume the technical readiness of the Air Force aircraft fleet. There is only the desire to master the budget MO.

"MIC": How will aircraft repair plants be transferred?

- The transfer form, whatever it may be, is illegal. Perhaps enterprises will be bankrupt, the administration will buy them up and immediately sell them at market prices like land. How now they sell the land of the company Milya in Moscow, how they are trying to sell all the land of the military-industrial complex in the capital. Everything is for sale, everything is built up.

"MIC": Is it possible to transfer "Aviaremonta" in the corporation "Rostec"?

- Not the best option. But if you give it to Rostec Aviaremont and UAC, it will be correct. Sergey Viktorovich Chemezov, a state man, will ensure the solution of all tasks.