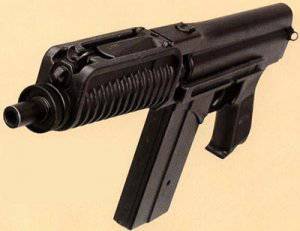 At the end of 1980, while Klimovskiy designers worked on the CP-3 “Whirlwind” compact machine, the Tula gunsmiths from the Instrument Engineering Design Bureau (KBP) began working on an alternative to it - the 9А-91.

In the West, compact weapon received the designation PDW (Personal Defense Weapon - weapon of free hands), the main purpose of which is the armament of military personnel not associated with the main types of weapons - drivers of vehicles, radar operators, etc., and should not prevent them from carrying out their basic duties.

The designers of KBP were faced with the task of creating powerful small-sized weapons for the internal troops and internal affairs agencies of Russia, which could successfully replace both 7,62-mm assault rifles AKM / AKMS and 5,45-mm AK-74 / АКС-74 / АКС-74У.

In order to achieve high combat performance, the small-sized 9А-91 submachine gun as well as the CP-3 “Vortex” was created for special 9-mm automaton cartridges of the SP-5 and SP-6.

In 1992, the new weapon was first introduced to the general public, and in 1994, the serial production of the 9A-91 machine gun was launched. 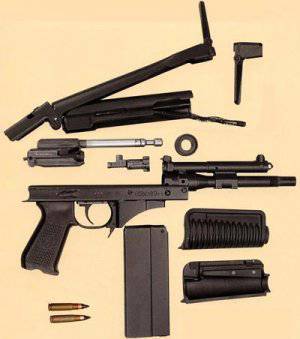 upgraded version of the 9A-91 incomplete disassembly

The automatic machine 9А-91 is based on the traditional scheme with a gas engine automation. Locking the barrel by turning the bolt on the 4 combat stop.

In the first installments of 9А-91 automata, a compensator was installed on the muzzle of the barrel, subsequently removed from its design.

The trigger trigger allows for single and automatic fire. The fuse box is combined with a translator of fire and is located above the opening of the trigger guard on the left side of the weapon. When you turn on the fuse flag overlaps the groove for the passage of the charging handle.

The folding loading handle located on the right side is rigidly connected to the slide frame.

A steel stamped butt folds up and down. Folded stock is located on the cover of the receiver. Machine with folded butt fit into the dimensions 372x188x44 mm.

When folding, the butt does not increase the dimensions of the weapon, and the folding cocking handle makes the machine "flat" and comfortable with constant wear, including secretive.

The forend, made up of two symmetrical halves, and the pistol grip are made of injection-resistant impact-resistant plastic.

With the exception of plastic handles of fire control and forearm, all other parts of the machine are steel. Stamping and spot welding are widely used in their manufacture.

The sighting device, with a fairly short sighting line, consists of an open throw-over sight, designed for 100 and 200 m.

The weapon is powered by ammunition from a straight two-row box magazine with a capacity for 20 cartridges. Store latch located in front of the trigger guard.

Since the 9A-91 machine gun went into service with the internal affairs agencies of the Russian Federation, the leadership of the Ministry of Internal Affairs had to worry about supplying these weapons with ammunition. Special 9-mm submachine guns SP-5 and SP-6 because of the special steels and metals used in them turned out to be extremely expensive, therefore for supplying mass weapons, how did the 9А-91 machines become after they were armed with a significant number of internal affairs units, It required the creation of cheaper ammunition. Therefore, a PAB-9 cartridge was soon created, using a heat-treated steel core, which made it possible to satisfy all police needs for these cartridges. The bullet of the PUB-9 cartridge provides for the defeat of the enemy's manpower in the 3 class individual means of protection, and at a distance of up to 100 m is guaranteed to penetrate the 8-mm steel sheet.

In terms of characteristics, the compact 9А-91 submachine gun surpasses the foreign design of the PDW. Its mass without a magazine is 2,1 kg, its length with a folded butt is 383 mm, the effective range of fire is 200 m, which is twice as high as the fire of submachine guns under the most common 9x19 “parabellum” pistol cartridge.

In addition, unlike the CP-3 “Whirlwind”, the 9-91 assisted a wider range of use, so its design was originally based on the possibility of using a detachable muffler mounted on the barrel. In addition, it was planned to equip the 9-91 with an 40-mm GP-25 grenade launcher, but this attempt was not crowned with success, as the 9-91 had insufficient mass and structural strength to withstand powerful recoil when firing an 40-mm grenade.

an upgraded version of the 9A-91 with a silencer installed

In 1995, the machine gun was upgraded, which allowed the device to be mounted on the muzzle of the device for silently flameless shooting, and on the guide on the left side of the PSR-1-1 telescope or NSPU-3 night sights, adapted to the ballistics of the SP-5 cartridges , SP-6 and PUB-9, as well as laser pointer TsL-03. The fire guard-translator flag on the left side of the weapon was moved to the right side. The modified small-sized 9А-91 submachine gun with a mounted silencer and a telescopic sight provides covert shooting at targets at a distance of up to 400 m.

In addition, on the basis of 9-91, a rifle sniper complex VSK-94 was developed, which also entered into service with the special forces of the internal troops and internal affairs bodies.