Russia is a refuge 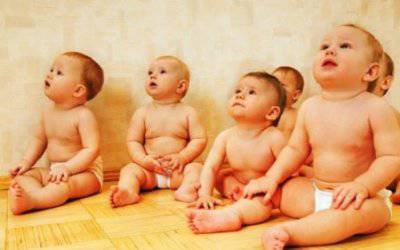 My last article, “Pension as one of the reasons for the destruction of the family,” as expected, gathered a large number of minuses, and if it were a ship, its evil lines in the form of torpedoes would have been thrown to the bottom, despite the opposition of a few anti-torpedoes - “+”.


The essence of the previous article is as follows: to change the pension system so that the pension is not paid for experience, contributions to a special fund, etc., but depending on the number of children in the family and their quality (in the material projection, their salary).

To be honest, I thought that I was opening up America, but it turned out (thanks to constructive criticism, which I always read with great interest), it turned out that everything is already written in the project “Billionaire Russia”. Probably I don’t give Columbus laurels to sleep.

The ideas of the article and, more broadly, the previously written project are interesting, promising and ... unrealistic. Too radical changes must occur, and the person, besides being a selfish person, is also very inert.

We need to straighten the demographic situation today, it would be better yesterday, at the very least tomorrow. I will not go into details, everyone already knows about the 90's children who have been born, the overmortality of Russian men, and the ratio of the number of abortions to infants.

In Milan, Brussels, Berlin and New York, one can often hear Russian speech, to find communities of compatriots, unfortunately, the former. For the most part, they are refugees, immigrants, and migrants for economic reasons. They left for the best share, for social protection, for safety, for comfort. Sometimes they watched too much “Beverly Hills 90210”, “Helen and the guys”, “Santa Barbara”, and they were sure that they would live as elegantly as the characters of these TV series. I've been waiting in my homeland for almost bread and salt when I designed a trip to Russia from Ukraine for permanent residence. What kind of people are naive?

But the western tale ends, gradually turning into a farce, tragedy, and sometimes into a horror film. If earlier the same Europe and America were actually countries of abundance (the fact that this led to debt slavery was not visible at the first increase), especially against the background of the late USSR, now the situation is changing. I do not say that in the expanses of the Urals or the Volga region, life is better than in Kansas and the Apennines. I’m talking about the trend, and it’s such that not so much time will pass, and the real standard of living of people in Western countries will fall to ours, or even lower. Interestingly, representatives of the “golden billion” will make in this situation without our quenching perestroika, cheesy roads, interruptions in wages “a la 90-e” and with their lawns - lawns instead of our “potato haciendas”.

Imagine comfortable, with easy chairs and air conditioners, Boeing and Erbasy diving down to the ground, and an old corncob, not falling anywhere and not particularly rising (sorry). Where would you like to be? If in a falling liner, then, most likely, you are finishing the chewing “Meller” candy, which was given by a passing pilot with a parachute behind his back. Ours, even if they have already taken root on foreign shores, cannot be caught, and a significant part of them will pack their bags home. And here our state must finally decide: people need it, or everything is as usual.

In addition to the economic recession and increasing social insecurity, such ulcers of the Western world (stunned, in one national book 70-s saw this expression, but one hundred percent hit), as propaganda of sexual perversions, juvenile justice and pervasive tolerance. All this is taught as the norm, as the only correct behavior of a person, as some kind of reference points in life.

Is the whole of Europe - geyropa and tolerastov? In Western countries, there are still many people who share not modern, “universal” values, but common Christian aspirations. In addition, the instincts of women as mothers and men precisely as men are phenomena that can grow through any filth.

Maybe the Europeans are normal, they are going to us, and let the Muslims deal with other things. It’s just that in one not so distant day, we’ve eliminated all juvenileism, sexual perversions are subject to treatment or punishment, the rainbow finally becomes a symbol of childhood again (not my thought, but one commentator, but painfully bumped into memory) Let homegrown gangs of “common human beings” scratch the stream.

Just imagine, our guarantor for the whole world utters these theses, the country begins to implement them. Well, sodomites, our embassy with rotten eggs will cast aside in Amsterdam (or that the creative floor will come up with this), “femen” in the whole composition will show beautiful breasts in Red Square - at least news no wonder I'll look. It seems to me that after any such trick the rating of the President will increasingly rest against 100%. We get the image of a truly normal European country and, in addition to the returnees, a lot of refugees from a western madhouse with normal thinking, a desire to create, and, inevitably, their technologies, technical solutions, specialists.

I wonder if they will take root in our land?

What is the prize pool for you? The prize fund is the money that could be borrowed from Slavik by the name of the Prize. Sharp turn? This Sasha Krutt on the machine works up miracles. There are Kurt, Nordit, Ott, Forat, Russian tsars and tsaritsas after Peter. Externally the same as we are, and the maximum for one generation completely rusyat. Recently I watched “Legend No. 17”, so Kharlamov on 50% is a Spaniard, and runs with our club, and not with a football ball.

I am sure that we, Russians, are able to Russify and float all our periphery in the common pot, we would not like the average Russian years through 200 - 300 to change the eyes or the color of the skin, let it be Butlers and Lermonts, although the descendants of the arap are easily we may have symbols of the country.

Ctrl Enter
Noticed oshЫbku Highlight text and press. Ctrl + Enter
We are
About Stalin and KhrushchevWhat you didn't want to know about England
Military Reviewin Yandex News
Military Reviewin Google News
56 comments
Information
Dear reader, to leave comments on the publication, you must to register.