23 May 2013
5
The sixties of the last century are deservedly considered the era of helicopters. At this time, the helicopter industry clearly demonstrated its effectiveness and therefore acquired particular importance in the eyes of the military and air carriers. The designers of the leading countries were engaged in the creation of new models of helicopters, as well as the study of alternative schemes using rotors. So, immediately in several countries there were projects convertoplanes of various systems. Aircraft designers worked on projects with a variety of engine and propeller arrangements and explored new promising auxiliary systems.


Among other topics convertible was engaged in the German company Vereinigten Flugtechnischen Werken (VFW) from the city of Bremen. In the 1963 year, after several theoretical studies, VFW launched a full-scale design of a convertoplan intended for carrying passengers and cargo. It was assumed that in the coming years, the new aircraft would be of interest to the military and civilian companies. The proposed appearance of the convertoplane theoretically allowed it to take off and land vertically, and in flight to accelerate to speeds inaccessible to helicopters. Such a combination of flight characteristics, typical of tiltrographs, was to be the main advantage of the VC 400 project. 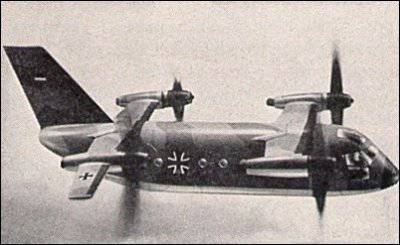 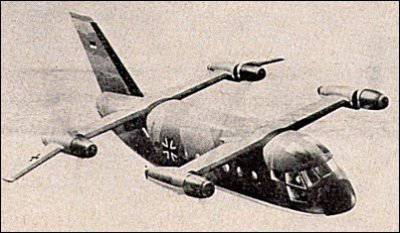 In the course of the design, the convertiplane VC 400 underwent some changes, but ultimately received the following look. The fuselage had a close to cylindrical section, and resembled the corresponding unit of the near and medium-range aircraft. Inside the fuselage was supposed to place the cargo compartment almost 12 length, 2,3 width and 2 height meters. At the top of the fuselage on the VC 400 were attached two wings with turboprop engines located on them. Above the fuselage tail, a large area keel was designed to provide travel stability when flying at high speeds. To move on the ground, the aircraft was equipped with a four-bearing chassis: two racks with small wheels under the front wing and two with larger wheels under the rear one.

A characteristic feature of the VC 400 project was the design of the wings with engine nacelles. The new convertiplane was made according to a scheme that in the foreign classification is called tiltwing ("rotary wing"). This means that when converting a convertible from one flight mode to another, the nacelles must rotate together with the wing on which they are installed. The axis of rotation of the wings was approximately in the middle of their profile. At the same time, to ensure proper balancing in horizontal flight, the wings had a different size. Thus, the front wing engine nacelles served as its ending, and the rear had approximately twice the scope: it was proposed to install consoles on the outside of the engine nacelles. The rear wing of the project was equipped with advanced mechanization for more convenient control during horizontal flight.

The power unit of the convertible VC 400 was to consist of four horsepower turboprop engines with a power of about 4800-4850. Together with specially designed propellers with a diameter of about seven meters, such motors could provide the aircraft with good performance. According to calculations, the tilt-turn in a configuration for horizontal flight could accelerate to 710-720 kilometers per hour and fly a distance of up to a thousand kilometers, which corresponded to the characteristics of a considerable number of aircraft of that time. The power of the four proposed engines would be enough not only for high speed, but also for good cargo capabilities. With a total take-off weight of up to 22-25, tons of VC 400 could lift up to six tons of cargo, i.e. 58-60 passengers or about a hundred soldiers with weapons. Also considered the possibility of transporting light armored vehicles that fit into the dimensions of the cargo compartment.

By 1967, the VFW company completed the purging of several models of the future convertoplane and finally determined its appearance. During tests in wind tunnels, we managed to correct some shortcomings of the initial version of the project. In addition, it was the blow-downs that made it possible to optimize the design of propellers, which were supposed to work equally efficiently both in take-off, landing or hovering mode, and during horizontal flight. At the beginning of 1968, the project was completed and VFW staff began to prepare for the assembly of the first prototype.

However, in the end, managed to collect only a few layouts. The main problem of the VC 400 project lay in its high cost. Due to the technical complexity of the machine created, the cost of building a prototype was too high for VFW. She could not independently pay for the assembly of a prototype, so she had to turn to the military department for support. The German Defense Ministry became interested in developing, but still could not find funds to support the continuation of work. Even the completed project required a fairly large investment. There is information about unsuccessful attempts to attract foreign partners to the continuation of the program.

Ultimately, due to the inability to continue work, the VC 400 project was abandoned. Construction of the prototype has not begun. The know-how gained in creating the VC 400 was later used in the VC 500 project. The new convertiplane was a larger rotary-winged vehicle with the corresponding characteristics: take-off weight of about 45 tons and payload in the form of 110-120 passengers with luggage. Thanks to more powerful turboprop engines, the VC 500 tiltrotor could accelerate to a speed of at least 730-740 km / h.

It is not hard to guess that due to financial problems with the VC 400 project, the new VC 500 machine remained on paper. The VFW company has conducted several studies concerning the aerodynamics of a larger tilting convertiplane, but that’s the end of all the work. VC 400 and VC 500 remained the largest projects of convertiplanes with four engines. In the future, the main work in this area concerned only two-engine machines. Such aircraft turned out to be less technically sophisticated and more convenient to operate. However, they still have not managed to take away a significant share of traffic from helicopters or airplanes.

Ctrl Enter
Noticed a mistake Highlight text and press. Ctrl + Enter
We are
An-12 in AfghanistanConvertoplane (helicopter) Bell V-22 Osprey
5 comments
Information
Dear reader, to leave comments on the publication, you must to register.