SS, SMERSH and warnings of the doctor Onishchenko 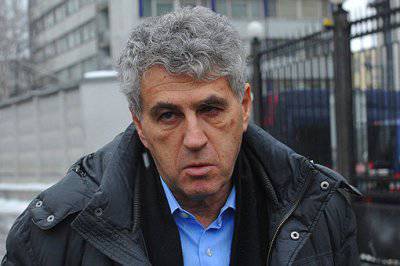 But Gennady Onishchenko warned: not all Russians will benefit from the long May holidays ... And we all said: no, Gennady Grigorievich, everything will be fine - we will rest and get rid of cockroaches in my head. But now it’s worthwhile to state that the chief sanitary doctor of the Russian Federation was right after all.


To understand this, it suffices to give just one episode, which happened at the final stage of a long May holiday. While many practiced on the beds, they tinted the fences of country houses and burned the festive kebab, one person (well, at least) continued to reproduce the very above mentioned insects in his little head. This man turned out to be Leonid Yakovlevich Gozman, currently the president of the Alliance of Right-wing forces and the director of humanitarian projects of the state-owned company Rosnano, the same Leonid Yakovlevich Gozman, who at one time was an adviser to Anatoly Chubais and a member of the board of RAO UES of Russia. So this very Leonid Yakovlevich in his blog on the most progressive and democratic radio station in Russia, if not the world, (Echo of Moscow) issued outstanding material. In this material, using all his literary talents, he lamented the fact that, say, on the screens of Germany, the TV series about the SS soldiers did not come out, but in Russia the series about the representatives of SMERSH was released. After that, Mr. Gozman decided to strengthen the literary effect, adding that he was struck with such injustice, because the structures of the SS, in his opinion, did not differ in any way (except the beautiful form) from the Soviet SMERSH.

Here is an exact quote from Leonid Gozman's blog:
I do not know how many they shot, how many were sent to death in our camps? I do not know how many among those who were shot and arrested were completely innocent? Lot. No doubt, at the same time, there were honest soldiers in SMERSH. It just happened that they served in a structure no less criminal than the SS. And the very word - SMERSH - should stand in the same row with the words "SS", "NKVD" and "Gestapo", cause horror and disgust, and not put into the name of patriotic militants.

It would seem, well, who in general is this Leonid Yakovlevich Gozman to pay attention to his statements generated by a long and obviously inactive weekend. Yes, "just something" is an official who manages to expose himself as an implacable fighter against the "regime" and at the same time be in the leadership of one of the largest companies with direct government financing. However, the matter is not only in this gentleman, but in the fact that the wave in general has risen in our country after the publication of Gozman in a blog on Echo. He (at Gozman) immediately found ideological supporters who, you see, are also inclined to equate fascism with those who forged a victory over him. Yes, ideological supporters.
These people, like Leonid Yakovlevich, do not hesitate to admit their complete incompetence about historical facts, they sign that they do not know “how many they shot, how many they sent to the camps” (talking about the SMERSH employees), but this, it turns out, does not in any way prevent them from drawing certain parallels. Doesn't interfere at all. After all, Leonid Yakovlevich, as an obvious expert, who apparently managed to get an idea of ​​the activities of SMERSH, being an advisor to Mr. Chubais, did his job - he abandoned the rotten worm of historical trolling.

He said that "many" were shot, "many" were sent to death - and that's it. Apparently, after this we had to gather around the world around the president of the Alliance of Right Forces LTD., Believe him as an expert, take the floor and brand the entire film crew of the SMERSH series together with the heads of the TV channel that showed the film. Leonid Yakovlevich and his cockroaches waited, waited, waited, waited, enjoying the support of his remarkable idea from like-minded people, but ... Suddenly, journalist Ulyana Skoybed appeared on the horizon, who also read Gozman's "cry of the soul" and gave out her material in response to Leonid Yakovlevich. Issued on the pages of "Komsomolskaya Pravda", so much so issued that Roskomnadzor became interested in its publication. Due to the fact that the interest from the materials on the part of Roskomnadzor does not appear just like that, we cannot accurately quote Ulyana. Only in general terms ... And in general, Skoybad, in response to Gozman’s publication, said something like the following: she regrets that the Nazis didn’t make certain lighting accessories from the ancestors of the modern liberal intelligentsia. Like, if they had done, then today there would be fewer problems ...

And so it happened that this statement of the journalist, who, to put it mildly, did not share the views of Leonid Yakovlevich, did not like Leonid Yakovlevich himself ... After that, Leonid Gozman finally tried to shake off the prolonged May holidays, maybe even drank a pickle, and decided that urgent need to protect yourself and your position. Protect went where? Right! - again to a platform that likes to savor the statements of the modern liberal intelligentsia. The platform for this was the TV channel “Rain”, where Gozman decided to pour out all his sadness about how he, the hapless, got from the writing (and speaking) brotherhood. It didn’t become long to choose a way to protect one’s loved one, because the main way to protect against those who do not share their points of view, excessively liberal politicians today see an urgent switch to the harmful manifestations of fascism in Russia.

And here is the quintessence of protecting ourselves from Mr. Gozman: "we must deal with our own fascists ourselves."
Well, what can I say ... If a person has a mania to associate with the fascists much of what is moving, even on a television screen, then it is urgent to contact the same chief sanitary doctor, Gennady Onishchenko. Maybe he has some medicine that will help Leonid Yakovlevich get rid of his mania. There are poultices there, a multi-chamber, anti-cicatrization tools in the form of enemas, green lamps with glass lampshades ... In general, a person needs some help, and that’s good, the country will lose all the creative director of humanitarian projects Rosnano. Who then after this humanitarian component will steer in the company of Anatoly Borisovich? .. Cause ...

Ctrl Enter
Noticed oshЫbku Highlight text and press. Ctrl + Enter
We are
Ex-Minister Serdyukov discovered at the position of adviser to Chubais in RosnanoChubais reported for the five-year budget content
Military Reviewin Yandex News
Military Reviewin Google News
292 comments
Information
Dear reader, to leave comments on the publication, you must sign in.