Defense Ministry: Ukraine and Moldova staged a blockade of the Russian peacekeepers in Transnistria 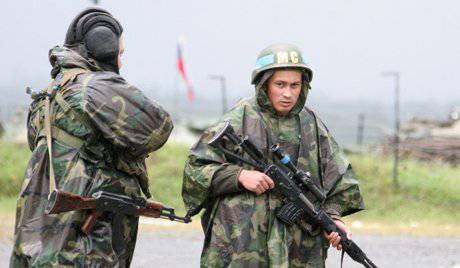 Peacekeepers in Transnistria were subjected to a transport blockade by Ukraine and Moldova, Russian Assistant Minister of Defense Colonel-General Valery Yevnevich said on Tuesday at a round table meeting in the State Duma on the development of integration relations of Transnistria with neighboring countries.


“We ensure the stability of the situation in the Transnistrian region and are most interested in this,” said Yevnevich. - Russian peacekeepers operate in a transport blockade. Recently, not a single issue has been resolved on the movement of our goods through the territory of Ukraine. ”

“We are not allowed to fly through Ukraine’s airspace,” ITAR-TASS quoted a general.

“As a result, the material and food supply is blocked, which affects the daily activities of our units,” the general said. At the same time, he referred to the experience of his trip to the region, when his car with diplomatic numbers was not allowed from the territory of Ukraine to Transnistria.

“I had to go with a local entrepreneur I knew in his car,” Yevnevich added.

At the same time, the Assistant Minister pointed to the free movement of foreign military.

“On Monday, within the precincts of Kolbasnaya, where our ammunition depots were located, we detained two officers from Great Britain and Poland, operating under the cover of the OSCE for intelligence purposes,” Yevnevich noted. “They are familiar to us because in 2008, they fled from the territory of Georgia to South Ossetia to collect military information.”

The general expressed the hope that the problems of transit of the Russian military through Ukraine to Transnistria will be raised in the near future during the visit of the Minister of Defense of Ukraine to Moscow.

The discussion was attended by the leaders of the unrecognized Pridnestrovskaia Moldavskaia Respublika, deputies of the State Duma and parliamentarians of Ukraine.

Russian peacekeepers were brought into the zone of the Transnistrian conflict in 1992, which made it possible to stop the fratricidal war, during which more than a thousand people died, tens of thousands were injured and became refugees.

Since then, there has not been a single outbreak of violence. This enabled Chisinau and Tiraspol to negotiate a peaceful resolution of the conflict.

Ctrl Enter
Noticed oshЫbku Highlight text and press. Ctrl + Enter
We are
Armed Forces of Transnistria: 23 of the year since its foundationThe blockade of Transnistria: how the West hands of Moldova and Ukraine "arranges reservations in the center of Europe"
Military Reviewin Yandex News
Military Reviewin Google News
67 comments
Information
Dear reader, to leave comments on the publication, you must to register.