Curse of the Nobel Peace Prize 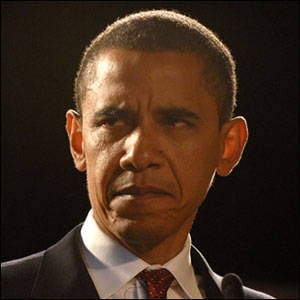 What is happening in the world already seems directly connected with the US president. Well, there can not be so much bloodshed in the world without any connection, just like that. For no reason, people just don't shoot each other. It seems that such reasons are found in the US administration. Someone such thoughts will surprise, they say someone would doubt, but the matter is somewhat different.


The point is not only that the US special services do their work and do not look at the “assurances of friendship and cooperation” issued by President Obama. The point here is probably not even that Obama is sincere or insincere in his statements. It seems that permanent failures in foreign policy are more than just some bad luck or bad work of the administration staff. It looks like an evil rock hangs over the Nobel laureate.

The heavily moderated conflict in Syria, and even its deliberate escalation may not bring events similar to what happened on September 11 for the United States, but significantly expands the circle of individuals interested in such a development. The BV conflict is expanding and growing like a plague epidemic. There are more and more "hit" ones, and this will surely raise questions, how did it happen? What caused the death of loved ones? Who pursued what goals? And it is here that the circle of people who, in the opinion of “those who ask questions,” can give an answer, can be quite clearly shaped. And the answer is that citizens of many countries of the world are demanding more and more insistently now.

Is it any wonder that after this the hatred for the USA grows? Very often (although now less often than before) we hear about the national interests of the United States at a point which is at a distance equal to half the globe from the territory of the United States. The question of what might be primarily the national interests of the country itself which is so far from Uncle Sam is superfluous. Uncle Sam himself determines where his priorities are.

Needless to say that people living in some Sierra Leone or in some other country are surprised that, having become the national interests of the USA, they will now have to listen to everything that any silly insane McCain or anyone else says .

Sprawling controversies around the world arise, of course, not by themselves, but of course, with the assistance of the US and the EU. This should not argue. Using the slogans of democratization of society, the United States today is surprised that, along with the development processes of which they constantly repeat, national traditions that have little resemblance to democratic ones emerge. The response of the local, intra-state society becomes the strengthening of religious hatred and religious struggle. That is, by expanding the unrecognized right of the United States to the truth, the President of the United States leads world relations to constant clashes. To be fair, President Obama does this much less than President Bush, for example, but in the current case, of course, it is present.

It was foolish to write an article if there were only exclamations and moans. Let's look at the facts. Let's see what changes have occurred in current conflicts and hot spots. President Obama said that he would close Guantanamo and of course did not close. The situation in Guantanamo is such that more than 100 people went on a hunger strike. What do they want? Yes, at least something! They were detained without presentation of charges and without imposing sentences. That is, they are deprived of the most democratic rights for which the United States is fighting. Vinipuh said in this case: In my bee something suspect. In the same way, the world community sees that the USA declares one thing and does something quite different.

The withdrawal of troops from Afghanistan was also a big question. If earlier it was said about the withdrawal of troops and even the dates were called, now it is said that the withdrawal will be partial. That is, the girl will be partially pregnant. By the way, evil tongues say that the United States wants to leave just enough troops to provide uninterrupted supply of heroin to Russia. Does it benefit the USA? It probably goes if the United States sets itself the task of really continuing to kill Russians by exporting drugs to Russia. History with super-cheap alcohol Royal someone remembers? Then the Russians simply tried to lime with alcohol. Now it looks like it will be drugs.

The situation in Syria is no better. For a long time, the Western media tried to convince the whole world that Assad was a bloody dictator, and now it turns out that those who fight against Assad are simply fiends. Everyone remembers the shots on which the fallen Syrian military was subjected to unprecedented outrage, when the so-called "rebel" cut out his heart from his chest and began to tear it furiously with his teeth. Here it is your democracy dear Mr. Obama. Do you still call Assad illegitimate?

When it comes to refugees, then Europe just loses its temper. So I want to say, my friends, but where are the refugees from? It was you who brought the country to conflict and in fact forced the population to leave their country. You supply scumbags weapons and money, and then wonder at the rivers of blood.

Interestingly, Turkey in this case wanted to seem a winner, a regional leader, but it turns out to be just an accomplice to the bloody policy. In principle, the Turkish authorities should expect something in that spirit. The way the Turks do with their Kurds leaves no doubt that democracy does not even smell here. Now the Turks, dissatisfied with the rampant lawlessness in the refugee camps, began to kill their inhabitants. So what is the difference between the Turkish killers and the “bloody” Assad? In general, the Nobel Peace Prize has helped the current US president very little. Of course, his policy is different from the policy of the previous president, but it is not decisive yet.

Nevertheless, the author would pay attention to two points. The first is the appointment of US Secretary of Defense Chuck Hagel, the second is the policy of the Russian President. These are two certain factors that will not only have an impact, but already have a very serious influence on world politics. The appointment of Chuck Hagel is a black day for the Republican establishment. Nevertheless, the US presidential elections showed that the Republicans are not at all in favor of their own citizens, in such conditions, they do not strongly “step up”. If earlier the President of the United States appointed and removed the Secretary of Defense, but did not actually intervene in secret operations of the army and special services, now having received such a figure as Hagel for the post, Obama’s possibilities have significantly expanded, but the possibilities of those who constantly want to pobombit have narrowed considerably. .

The second of these reasons is of course the policy of President Putin. This politician clearly outlines the edges for which the United States is better not to go. Putin is a tough player, but he has one very positive quality, he is impassive, he does not let emotions take over, except when he promised to hang Mishiko’s genaty.

If it occurred to someone to compare the actions of the presidents of Russia and the United States, it would probably have turned out that, with goodwill on the part of the United States, Putin could easily have become a great colleague in the development of relations, but this could happen only after how the USA would restore its image, and it will take a significant number of years. Obama's presidential term is not enough for this. Perhaps even Putin’s next term might also not be enough. So, the “Nobel Prize for Peace” is not here as an assistant, but rather as a means of restraining further bloodshed, but it is not working so well yet.

It is necessary to say one more thing, if today the president of which did not award such a prize, we could even admire his policy to some extent, because the level of threats became lower. The only question is: why? Because of the peace prize or because of the lack of money for the war. According to the author, the peace prize has nothing to do with it. But it turns out that it played a negative role because it set off the massive bloodshed in the world, the main cause of which is undoubtedly the United States. The bias towards Russia in the sense of awards can be seen from the decision not to award the Quadriga with President Putin.

I want to point out a certain point in this case. Well, they decided not to reward, and would not be rewarded, but of course there is little sense in it. Therefore, the version was announced that he would be rewarded, and only then, from a raised height, the organizers decided to refuse this idea with a bang in order to create a greater resonance to the event negative for Putin. In fact, the opposite happened. The West has shown itself in all its cheap glory, and Putin has managed not to take the crap out of this “Euro-vision”.

From all that has been said in this article it follows in a special way that the urgency of the deterrent factor is dictated not by the mental nature of democracy, but still by the very reliable shield of the Strategic Missile Forces of the Russian Federation.

Until the necessary changes occur in the brains of American politicians, Russia must keep the powder dry, including for the lives of Americans, whom their own government sends to die somewhere near the devil on the horns, in the name of corporate profits with beautiful names and democratic slogans.

In the end, it is precisely because of Putin’s harsh policy that we are less likely to hear about American national interests, for example, in Georgia, and generally in the world.

Ctrl Enter
Noticed a mistake Highlight text and press. Ctrl + Enter
We are
A great interview with Sergey Lavrov: about Ukraine, Obama and IranWhat you didn't want to know about England
21 comment
Information
Dear reader, to leave comments on the publication, you must to register.