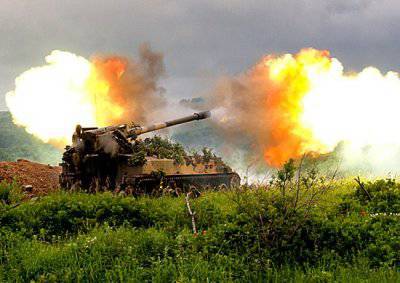 
According to official information, this agreement defines the interaction between Russia and Kazakhstan in order to:

- increase the efficiency of deliveries of military products

- conducting research and development work on the creation of new types of weapons and military equipment.

An agreement between the governments of Kazakhstan and Russia on the development and implementation of joint work programs in the field of military-technical cooperation was signed in Orenburg on September 11 on 2009.

The Parliament of Kazakhstan considered and adopted this law in March of this year. As Deputy Minister of Defense of Kazakhstan Sergei Gromov told the deputies, in submitting the document, Russia and Kazakhstan will create enterprises for the modernization of military equipment, and the Russian side initially proposed 46 projects, but as a result, at the insistence of the Kazakh side, the 2013 plan remained for 2015-9, which meet the interests of both parties ":

“In particular, among them is a plan to create facilities in Kazakhstan for restoration and overhaul aviation engines for military aircraft on the basis of the West Kazakhstan Engineering Company in Uralsk. Creation of an aviation technical center in Astana - Russian enterprises will take part in its creation, in particular during the repair of military helicopters. "

During the discussion of the issue, the Kazakh senator Altynbayev noted that this agreement "to some extent" will revive those enterprises of Kazakhstan industry that are engaged in the development of weapons. He also noted that Russia "somewhat eases the plight" of Kazakhstan in terms of maintaining and repairing its military equipment - "so that it all costs less."

Deputy Defense Minister Imanzhusup Akpombayev, responding to the question, “Do Kazakhstani enterprises participate in the defense order of Russia?”, Noted that, for example, last year supply volumes were at the level of 3 billions (he did not specify what currency he had in mind).

In 2012, the deputy head of the Secretariat of the Security Council of Kazakhstan, Saidmurat Tanirbergen, stated that within the framework of military integration, Kazakhstan was negotiating with the defense enterprises of Russia and Belarus on the production of heavy armored vehicles and anti-aircraft systems: “Given the recent range of threats to national security and in particular, military security has significantly expanded, it is necessary to ensure an adequate level of technical equipment of the troops. "

The official then said, in particular, that the Armed Forces of Kazakhstan are switching to a single KamAZ automobile base, while the KamAZ Engineering joint venture with Russia has become the main supplier of vehicles. Also, according to him, joint work is being planned with the Russian engineering design bureau to modernize and manufacture anti-aircraft weapons for ground forces, negotiations are being held with Uralvagonzavod OJSC on joint production of a number of heavy military equipment, a memorandum of understanding has been signed with Helicopters of Russia , there is cooperation with the Belarusian enterprise Midivisana for the production of a set of modular staff machines; a memorandum of cooperation has been signed with the Belarusian OJSC Agat on the development; and ACS and delivery for various purposes, under consideration is the issue of cooperation with the scientific and production enterprise "Tetrahedron" for joint production of anti-aircraft missile defense and radio equipment.

As the head of the secretariat of the Security Council of Kazakhstan summed up:

“It can be stated that as a result of this work, the Kazakhstan content in the total volume of military products has been significantly increased, the range of manufactured and modernized models of weapons and military equipment has been expanded.”

Ctrl Enter
Noticed a mistake Highlight text and press. Ctrl + Enter
We are
Su-30M arrived in Kazakhstan!The action “Military service under the contract is your choice!” In Rostov-on-Don: future contract servicemen, exhibitions and “Russian Knights”
17 comments
Information
Dear reader, to leave comments on the publication, you must to register.