Who do the Russian media work for? 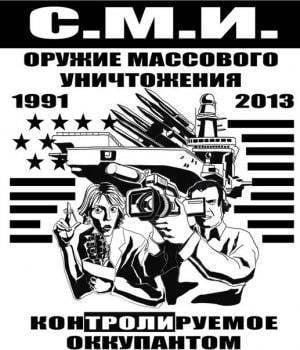 Recently in Russia there are more and more scandals related to the work of the media and specific journalists. Just the other day, another of them broke out - after the publication in the Komsomolskaya Pravda article of Ulyana Skoybeda, in which it was regretted that "from the ancestors of the current liberals, the Nazis did not do their own lampshades." Similar stories intensify the discussion not only about journalistic ethics, but also about the mission of the Russian media.


In the USSR, television, radio and newspapers worked on the formation of a new historical community - the Soviet people, and also engaged in the promotion of basic socialist values ​​- labor and creativity for the good of society, raising the education and culture of the population, promoting equality and fraternity. Along the way, the media glorified the greatness of the genius of Marx-Engels-Lenin, the communist idea as such, and of the single leaders — one or the other. But no one paid special attention to this, it was a familiar background.

Soviet journalism solved one of the most important tasks - the consolidation of society, turning it into a "one family", despite any differences (national, intellectual, regional). We are together, we are one, we are one people, moreover, advanced, educated, most reading, most talented ... This was the general line of the press.

Approved this line by different means. Much attention was paid to emphasizing the international nature of society. Numerous plots were produced in which Uzbeks, Estonians and Azeris work together on Komsomol construction sites in Siberia, Russians teach in remote Kazakh auls, while Georgians and Armenians master the permafrost in the company of Evens and Buryats ... football, volleyball and chess, and they do it well and have fun. We also saw countless fun and intelligent schoolchildren - winners of competitions and competitions.

Of course, the image of the enemy also played a major role in the work on the formation of a new historical community - in the form of the American military, threatening world peace, progressive socialist-oriented peoples and the USSR as their main hope and support.

Many complaints can be made to the Soviet press - about lacquering reality, tendentiousness, avoiding actual problems, etc. Nevertheless, the strategic meaning of the existence of journalism in the USSR was clear. A clear task was set that was implemented with varying degrees of honesty and talent. The media worked to strengthen the Soviet state and the communist ideology - to the best of the understanding of these subjects by the ideologists of the CPSU.

And now we will try to ask ourselves the question: what problem does the media solve in today's Russia? Who do they work for? What are the purpose, role, meaning of their activities?

In my opinion, the main function of any national journalism is to contribute to the coherence of the nation, to form a common agenda, a common information field. But the black-and-yellow shaft, which the media treat us to, has nothing in common with these tasks. Five accidents, three murders, a fight on interethnic grounds and a couple of fires with human victims — you cannot make any porridge from such an ax. Connectivity can only be built on the positive, on the facts that show that living in this country, among these people, is good. And we will not find such information in our afternoon with fire. Instead, the heading "Where to fell" is popular. The only thing where the positive presentation of the material still prevails is the subject of victory in the Great Patriotic War, but this reservoir has been drained almost to the bottom ...

How deliberately did Russian journalism change into a black and yellow gamut? And the whole - and the so-called state, and belonging to individual oligarchs, and even seems to be free ... I had to hear very different versions on this topic. In liberal circles, there is an opinion that dill, aggression and violence, which dominate in the state-run media, is the result of a conscious policy of Kremlin ideologues. Thus, people are shown how terrible and dangerous life is, and how a country needs a strong leader - the father of the nation, who alone keeps us from being completely plunged into chaos. On the other hand, the so-called liberal media are also interested in showing the horrors of life in Russia, since this will contribute to the collapse of the existing regime. Thus, in solving the problem of denigrating reality, the interests of state and liberal media coincide surprisingly.

There is another view of the roots of the situation. In 1990, in the wake of the lifting of all prohibitions, Russian journalism began to stupidly copy English-language tabloids, built on the awakening of "animal" instincts. This tendency imperceptibly overwhelmed the entire media market, and readers learned to live on such content. Now, with this needle does not get off - just like with oil. Non-state media can not abandon the "animal" subjects, because they immediately lose their ratings and advertising, and they simply have nothing to live for, and the state ones - because, again, they lose viewers who are addicted to peeping through the keyhole, blood and horrors , and as a result they will not be able to ensure the advancement of politically correct ideas, if they are entrusted with this.

As a result, if not so long ago we were shown joint dances and dances of Russians, Uzbeks and Georgians, now they strive to show how they cut each other, beat and rape. If earlier we saw what advanced schoolchildren we have, caring mothers, educators and teachers, now in the foreground are alcoholics and degradants who beat children, persecute and torture, and children themselves appear on the screens solely as either victims or juvenile scumbags. If before we were rubbed endlessly about the achievements of science and production, now it’s solely about their collapse, death and flight of all specialists to more prosperous countries. Government officials and deputies are all thieves and corrupt officials who spit on the interests of the people, militiamen and policemen are mentally unstable alcoholics and sadists, extorting money from everything that moves.

What are there still left underdone light images? Beautiful girls? Dull greedy fools. Athletes? They all sit on chemistry. Scientists? Either they survived from the mind of old age, or they fled to Western scientific centers.

As for the journalists themselves, they are increasingly presented as aggressive machines for creating shocking stories that have no moral restrictions. What are the programs of Mr. Malakhov alone ... But he sets the tone for hundreds of beginners, "feather sharks."

Working without a top-down agenda for Russian journalism turned out to be too difficult — intellectual and moral. After all, freedom fell on journalists as unexpectedly as on all others, and, like everyone, the journalistic professional community turned out to be not ready for it.

In American or, say, British journalism, there are very clear social attitudes regarding what is possible and what is not. The politically incorrect presentation of material on inter-ethnic relations, for example, will not work. Because there is an understanding: it leads to the shaking of the foundations of the state. And along with the tabloids, journalism of a different quality, for which there is also demand, feels great, from both the state and society. And then, of course, another question arises: is it not the reason for the degradation of Russian journalism that our state and society have not yet been able to work out any coherent agenda, no image of the future?

What is the ideology of the Putin team? What kind of society do we build, what basic values ​​should citizens be brought up on? No answer. And even if we are being offered a formal answer, then its unconvincing is too obvious, too obviously the country's leadership itself is in a state of ideological vacuum. In general, there is no value system either above or below.

In these conditions, and journalism is back to normal - to the animal nature of human nature. Having lost one of its main components - the mission, journalism turns into a ship without a rudder and sails, the only guide for the movement of which is money, profit. The media, which generally have to give society a high meaning, instill a certain system of values ​​and love for their country, are engaged in stupid earning money from the exploitation of basic human instincts.

Meanwhile, in the United States and in Britain - the strongholds and ancestors of the so-called free press - the ideology is present in huge doses, and journalists are very zealously defending it. There are in the local media and goodies, and lulling myths, and taboo territory. In general, having borrowed only the topics of tabloids from the West, we very much primitive our information field, and, most importantly, a whole generation of journalists who do not know how to work for a positive at all.

But in fact, in our life, as before, mixed all - and good, and bad, and evil, and good. But the traumatized journalism does not see this - the piece of ice hit the eye, just like in the fairy tale about the Snow Queen.

Ctrl Enter
Noticed a mistake Highlight text and press. Ctrl + Enter
We are
About Stalin and KhrushchevLeague of distinguished gentlemen
78 comments
Information
Dear reader, to leave comments on the publication, you must to register.