"Rays of pain" and a million bullets per minute: the most promising weapon in the world 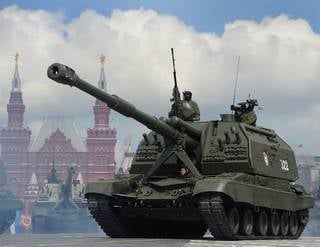 Russian scientists have tested the gun of the new sample. As Izvestia reports, citing its sources in the defense complex, the new gun is called thermoelectrochemical because of its principle of operation.


So, the explosive explodes with the help of plasma initiation instead of the usual drummer. The substance itself is much denser than gunpowder, which, coupled with the plasma and electromagnetic pulse, increases the flight speed and the firing range.

The arms race has always been: a more powerful projectile spawned thicker armor. In this regard, the online edition of M24.ru recalls promising developments that will appear in service in the near future.

First on the list is a laser - without which it is no longer possible to imagine any science fiction film, the defense departments of the world are slowly putting into service. And if no one is surprised by the battle lasers that shoot down planes, then this development is a real horror for the enemy. Conventionally, the installation of Thermal Laser System is called "rays of pain." The device causes an unbearable burning sensation on the skin of the enemy. This laser does not cause harm, but only causes pain.

Another combat use for such a shaped beam of light is missile defense. And if the "Air laser" on airplanes, designed to destroy missiles, while only in the project, then a small installation on board the ship is already a reality. 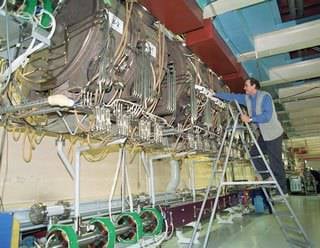 So, in the summer of 2012, the US Navy conducted tests of a combat laser, which successfully shot down a small UAV. As told to M24.ru chief editor of the magazine "National Defense" Igor Korotchenko, similar developments are underway in Russia. Thus, domestic scientists are designing an airborne laser installation, the purpose of which is to blind the enemy's reconnaissance satellites.

If (for now) a slow laser can be prevented from hitting the target, then against the fastest weapons in the world the enemy is unlikely to have a chance. Meet the "Metal Storm".

Australian scientists have come up with a radically new way of shooting: bullets are stacked in the barrel, one after another. The charge is ignited by an independent electric igniter, the next bullet expands, acting as a gate. Depending on the distance of the projectile in the barrel, the amount of powder will be different, providing an ideal and programmable delay time between shots.

The simple design (the magazine is loaded into the barrel as a whole), the absence of sleeves and moving parts makes the machine gun easy to operate. The "Metal Storm" scheme can also be used for grenade launchers. But the most surprising thing about him is the rate of fire: a million shells per minute. 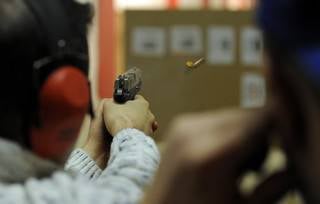 Currently, technology is gradually replacing a person on the battlefield: unmanned aircraft, suggestive missiles and sappers, but the ability to shoot remains the main thing for many centuries.

Soon everything will change - self-guided bullets have appeared on the arms market, which operate according to the principle (shot-forgotten). In the body of such a projectile is a microprocessor, and in the head - an optical sensor that sets the trajectory of the pool.

To adjust the direction of the shot help mikroruli at the base.

The accuracy of such a bullet is higher than usual in 45 times: at a distance of a kilometer, the deviation of a standard projectile is 9 meters, and that of a self-propelled 0,2 meter. Apparently, soon the snipers will be left without work.

And finally, about weapons that will appear in the armies of the world only in the long term.

So, in many fantastic games, books and films the Gauss gun flashes - a precision weapon operating on the principles of electromagnetic acceleration.

The principle of operation: the barrel with a bullet is located inside several coils that "pull" the projectile. Due to this, high speed, noiselessness (only if the speed of the bullet does not exceed the speed of sound), versatility (can shoot with different ammunition) and no recoil is achieved.

Despite the seeming simplicity of the device, the Gauss gun will not appear in service soon: it needs a compact and powerful power source, and also its weight and dimensions need to be reduced.

A similar device that can be used in the army is the railgun. Its principle of operation is based on the Lorentz force, which turns electric energy into kinetic energy.

It consists of two parallel electrodes (rails) connected to a current source. Between the rails is an electrically conductive mass, which closes the circuit and acquires acceleration.

The rail accelerator is able to accelerate the projectile to very large speeds, and under certain conditions it can heat and burn the projectile, turning it into a plasma. But, like the Gauss cannon, the railgun has its drawbacks: a powerful source of energy, as well as the provision of a powerful and sharp current pulse.

Ctrl Enter
Noticed oshЫbku Highlight text and press. Ctrl + Enter
We are
Commentary on A. Petrov's interview “Fire and Tactics in the Russian Army: Another Look”About revolution in military science
34 comments
Information
Dear reader, to leave comments on the publication, you must to register.