A-1 "Skyrader". The Last of the Mohicans 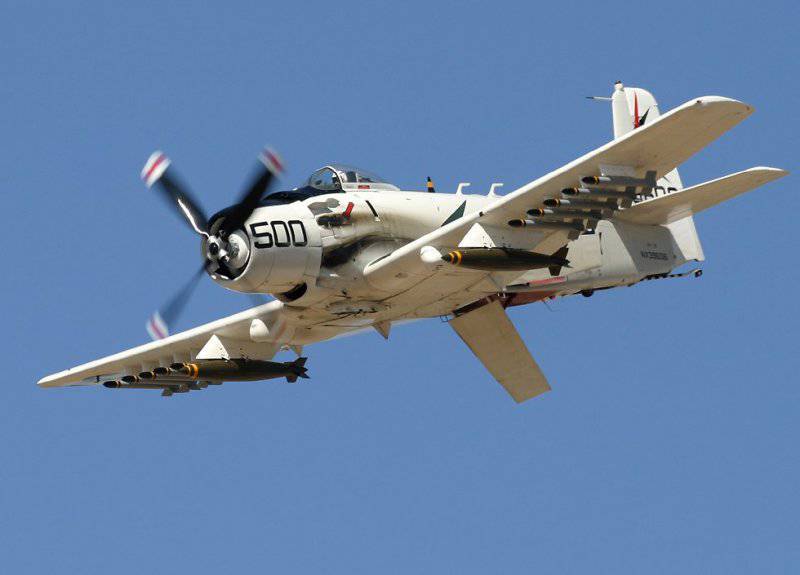 In the middle of the 40's, Douglas began work on creating an aircraft to replace a well-proven Dauntless in battle - later historians put it among the best carrier-based dive bombers of World War II. 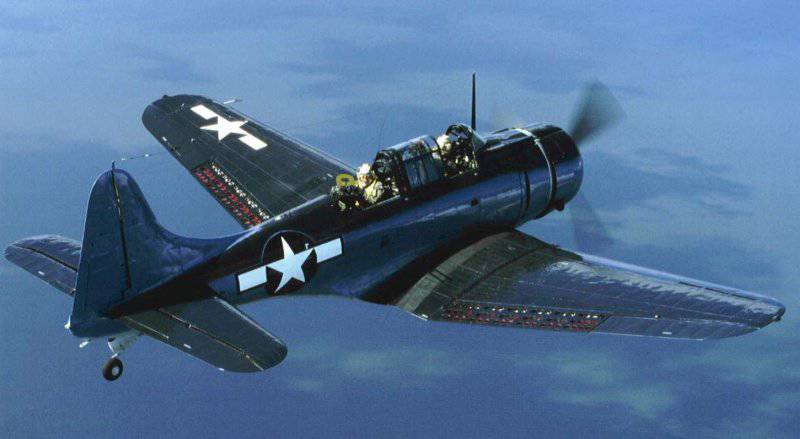 Suspended weapons were supposed to be placed on three pylons: one of them was located under the fuselage, and the other two were located in the root of the wing. The latter also performed a protective role in the emergency landing with the main chassis retracted. Defensive weapons on the Dauntless II was not installed. The pilot was in a spacious cabin under a teardrop-shaped lantern.
The high flight performance of the aircraft was supposed to be provided by installing a new Cyclone 18 R3350-24 engine with an 2500 horsepower, however, the car was built earlier than the engine stuck at the testing stage due to numerous defects. It was necessary to install ready-to-use Dauntless II prototypes to install already-used R3350-8 engines with an 2300 horsepower.
Great attention was paid to the designers of the cockpit layout. As a result of this work, the cabin was, according to pilots, the most perfect for its time. The first flight of the prototype XBT2D-1 was scheduled for 1 June 1945.
Factory tests lasted five weeks, during which time the aircraft made about 40 flights. All design characteristics were carefully checked, and the company was satisfied with the new machine. L. Brown overtook her at the Patuxent River Navy test site in Maryland and handed it over to military pilots for further tests. According to marine test pilots, the XBT2D-1 was the best carrier-based bomber ever tested at a center. The machine is fully compliant fleet. The simplicity of piloting and aircraft maintenance made a favorable impression.
Of course, it was not without comments: the pilots demanded to equip the cockpit with oxygen devices, and the technical staff - to enhance the lighting of the cockpit and tail section with the equipment. The company quickly satisfied the wishes of the flight and technical staff. 5 May 1945, the representatives of the command of the Navy signed a protocol with the company Douglas about the intention to acquire the 548 machines BT2D.
With the end of World War II, the production of combat aircraft was stopped a day after the end of hostilities.
The cost of canceled contracts was about 8 billion dollars. More than 30 000 aircraft, which were in varying degrees of readiness, were sent for scrapping.
The number of BT2D bombers ordered by Douglas was also significantly reduced, first to 377 and then to 277 aircraft. And such a small, in comparison with the wartime, order became the “lifeline” for the Douglas firm - after all at that time the rest of the aircraft building companies suffered huge losses. Until the end of 1945, all 25 prototype aircraft were built.
The first four were equipped with "temporary" engines R3350-8, and the rest - the first serial engines R3350-24W, which were provided for the project. In addition to the three main pylons for the outboard armament, under the consoles of the wing, we fixed another 12 of small suspension units designed for 50 kg each. Gun armament consisted of two 20-mm guns.
In an effort to oust their main competitor, Martin's Mauler, Douglas designers presented the BT2D as a versatile aircraft capable of solving almost all the tasks facing a deck-based strike and auxiliary aviation. To demonstrate this quality, the company upgraded six prototypes: the XBT2D-1P reconnaissance aircraft was made from one, the XBT2D-1Q electronic warfare aircraft from the other, and the XBT2D-1W radar detection and patrol aircraft from the third. Two vehicles with upgraded equipment and a radar in an overhead container were tested as XBT2D-1N night bombers. And finally, the last aircraft became the prototype for the next modification of the XBT2D-2 and was considered a carrier-based attack aircraft.
In February, 1946 of the BT2D Dontless II was renamed Skyraider (Sky Raider). In April, the class of aircraft VT (torpedo bomber) in the US fleet was abolished. He was replaced by class A - attack aircraft, and Skyraider received a new designation - AD.
In the late spring of 1946, several AD prototypes were tested on the deck of an aircraft carrier. The strength of these machines turned out to be very low and their design could hardly withstand the hard landings characteristic of all deck aircraft. Most of the identified deficiencies related to the low strength of the chassis and the docking areas of the wing and the stabilizer with the fuselage. We had to strengthen the weaknesses, and the serial AD-1 began to weigh on the 234 kg more experienced XBT2D-1. The first serial attack aircraft took off on November 5 1946 of the year.
The transfer of aircraft in combat squadrons VA-3B and VA-4B (aircraft carriers Sicily and Franklin D. Roosevelt) began in April 1947 year. Mass production continued until the middle of the 1948 year. In addition to bombs and torpedoes, X-NUMX-mm HVAR unguided missiles, known as Holly Moses, were part of the AD-1 armament. The maximum speed of the vehicle was 127 km / h, the flight range - 574 km. Total was built 2500 serial aircraft AD-241.
Especially for night strikes on ground targets, Douglas has developed a night modification of the AD-3N attack aircraft. 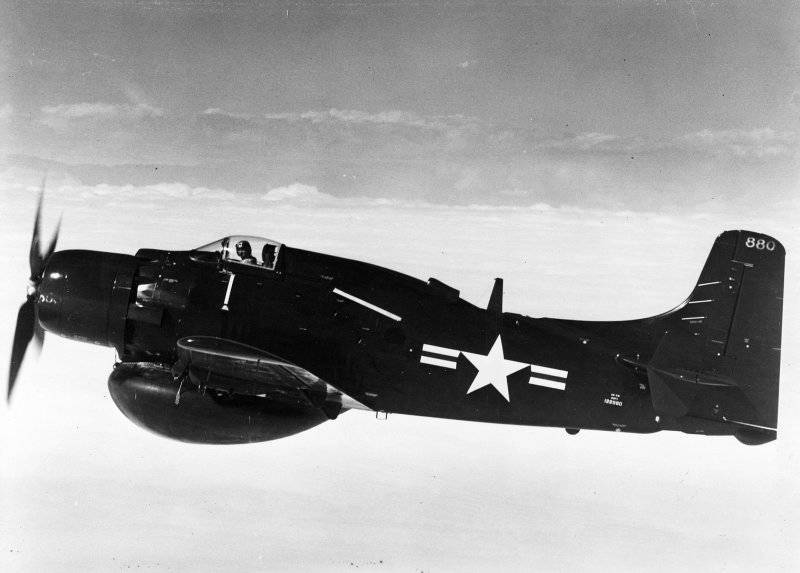 Between September 1949 and May 1950, the 15 fleet of such aircraft was built and delivered. The crew of the night attack aircraft consisted of three people. Under the left wing of the wing was suspended container with a radar station. 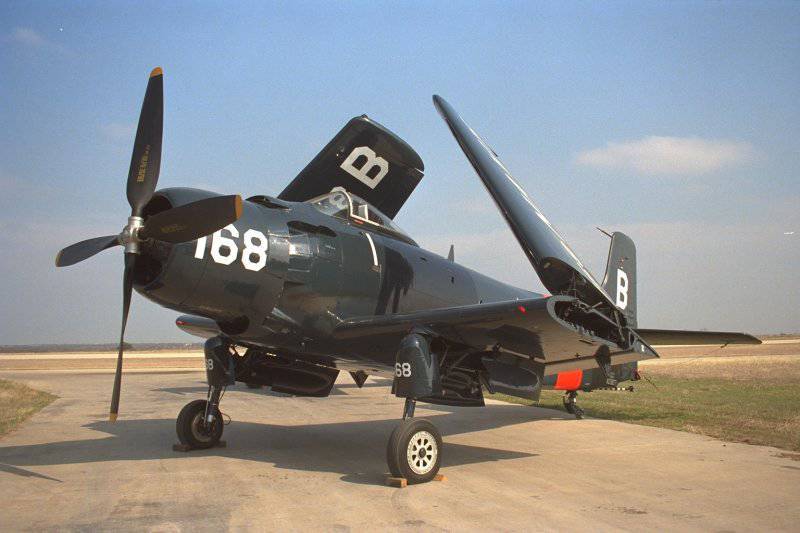 The next serial modification was the AD-4 Skyraider with the R3350-26WA engine with 2700l.s power designed specifically for the Korean War. The design took into account the experience of applying previous modifications. To protect the pilot from small-arms fire weapons frontal part of the lantern closed armored glass.
To facilitate piloting in long flights on attack aircraft, the autopilot was installed and the instrument layout was changed on the dashboard. To reduce accidents during landings, increased the brake hook. The number of wing guns increased to four. After all the modifications, the take-off weight of the aircraft increased, and the range decreased to 2000km. However, these disadvantages are more than offset by the increased effectiveness of the application. Before the end of the war, they managed to build more than 300 "Korean" AD-4, all in all, 398 units were produced. 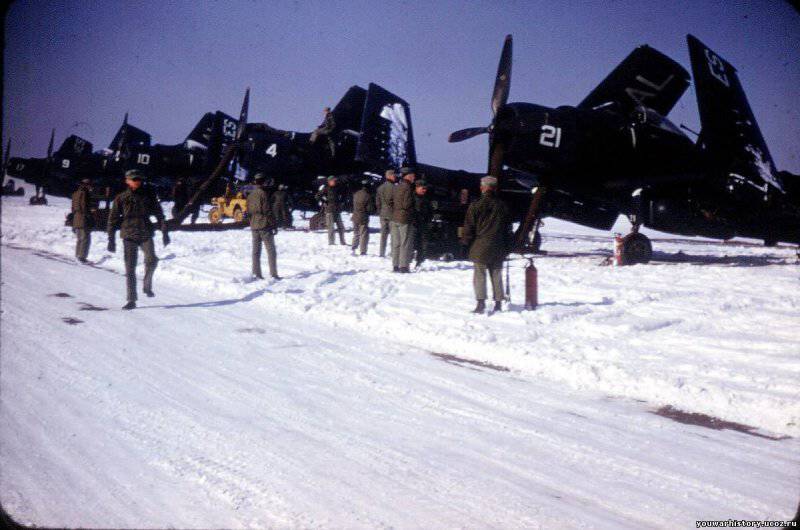 During the Korean War, "Skyraider" was one of the main aircraft of the US Navy, and it was used by the Marine Corps squadrons.
The first combat missions were made on July 3 1950 of the year. In Korea, Skyraders held a unique stories torpedo attack, and also scored one aerial victory (By-2,16 June 1953 of the year). According to reports, the 128 A-1 attack aircraft of all modifications were lost in the three years of war. Compared with piston "Mustangs" and "Corsairs" used to solve the same problems, "Skyrader" favorably distinguished by better survivability and greater bomb load. 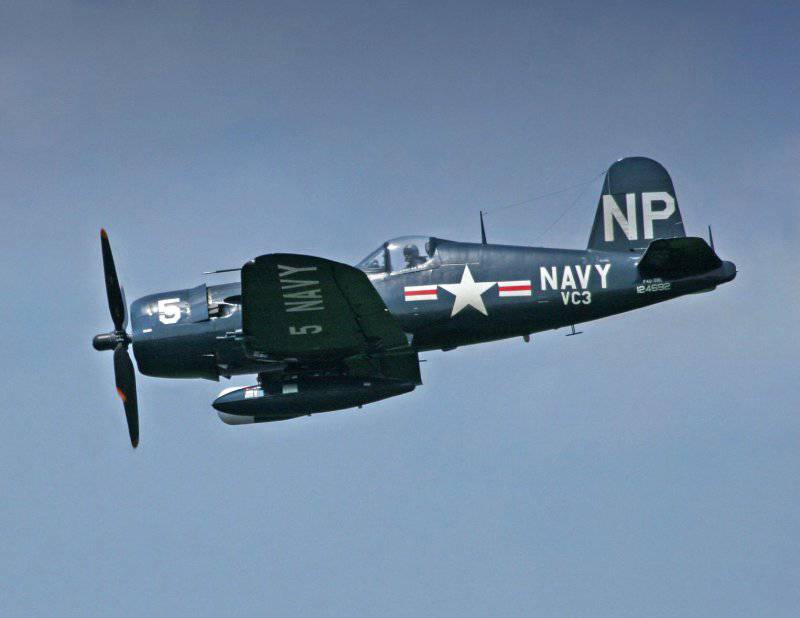 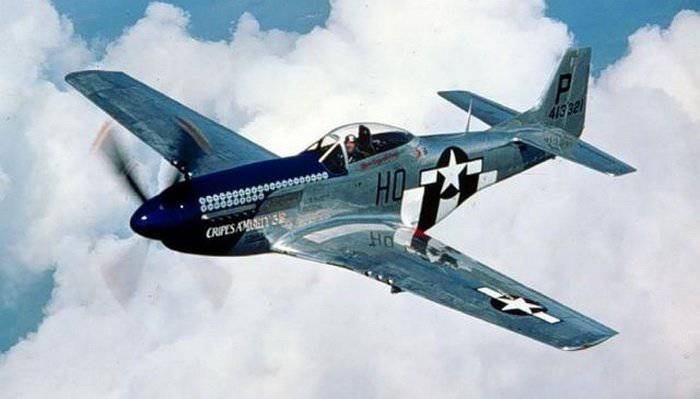 At the end of the 40-ies, a version of the Skyraider attack aircraft with the designation AD-4B was developed for the transportation and use of nuclear weapons — a tactical nuclear bomb of the Mk.7 or Mk.8 type. The 7 X. MCN XX series production began in the 1 year - for the first time in history, the size and weight of the bomb allowed it to be delivered by tactical aircraft.
A typical bomb for an atomic attack aircraft was one bomb and two outboard fuel tanks according to 1136.
The most massive modification of the aircraft was the attack aircraft AD-6.
During its creation, the main emphasis was placed on increasing the survivability of the aircraft in the face of strong opposition from enemy air defenses. To this end, the AD-4B cab and the fuel tanks of the attack aircraft were protected with overlayed armor plates, some units were redesigned in the hydraulic and fuel systems and some of them were duplicated to increase survivability. On the AD-6 installed upgraded engine R3350-26WD power 2700 hp Serial production of the sixth modification went simultaneously with the fifth. Total was built 713 aircraft. Production completed in 1957. In 1962, cars received a new designation - A-1Н.
By the middle of the 1960s, the Skyrader could be considered an obsolete plane.
Despite this, he continued his combat career during the Vietnam War.
A-1 participated in the first raid on North Vietnam 5 August 1964. The US Navy used the A-1H single-seater version up to 1968, mainly over North Vietnam, where they claim that they were able to win two victories over MiG-17 jet fighters (20 June 1965 and 9 October October 1966) with piston attack aircraft. The USAF used both the A-1H and the two-seat A-1E. 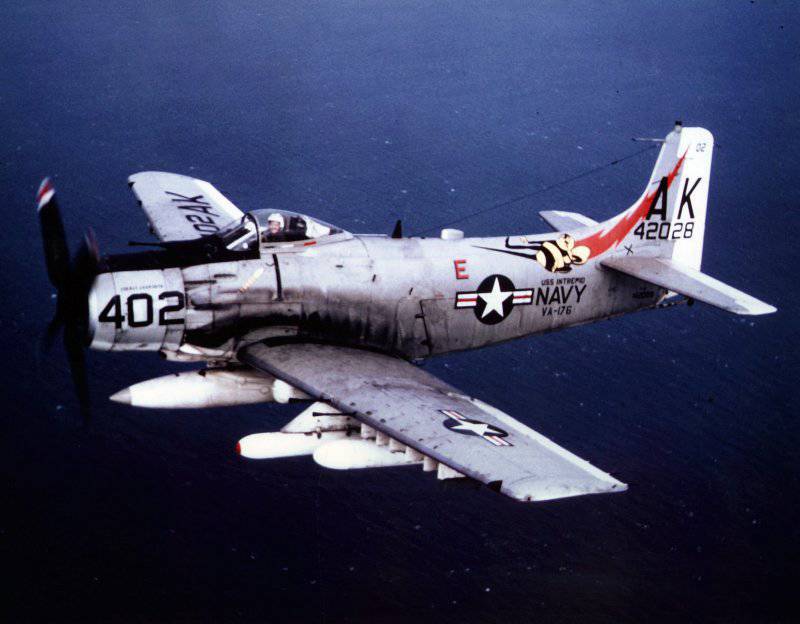 In 1968, the Skyraders began to be replaced by modern jet engines and transferred to the South Vietnamese allies.
These aircraft showed high efficiency in providing direct support to ground forces, but were best known for participating in search and rescue operations. The low speed and time spent in the air allowed A-1 to escort rescue helicopters, including over North Vietnam. Having reached the area where the downed pilot was located, the Skyraders began patrolling and, if necessary, suppressed the enemy’s anti-aircraft positions. In this role, they were used practically until the end of the war. Only two months before the cessation of the bombing of North Vietnam, at the end of 1972, the search and rescue helicopter escort was transferred to A-7 attack aircraft. After that, all remaining cars were transferred to the Air Force of South Vietnam, in which until the middle of the war was the main attack aircraft. The loss of American "Skyraders" in Southeast Asia accounted for 266 aircraft. After the fall of the Saigon regime, several dozen combat-ready aircraft of this type went to North Vietnam as trophies. 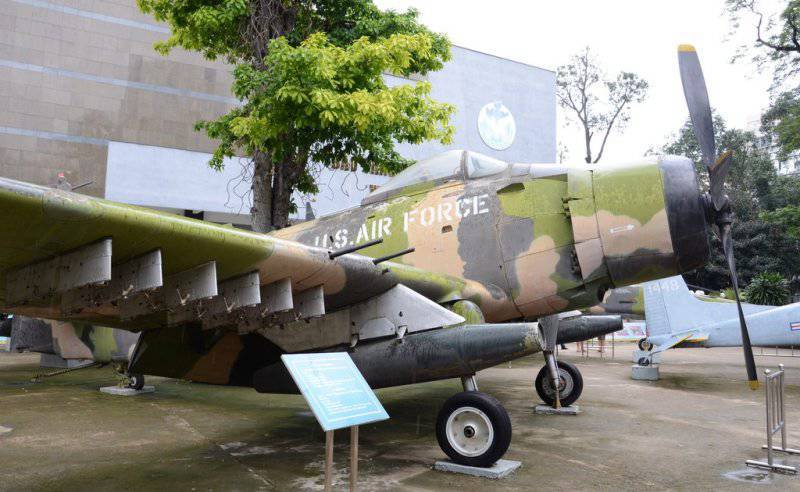 During the war, two pilots of Skyraders were awarded the highest US military award - the Medal of Honor. Skyraider did not have time to take part in World War II, but these planes were used on a large scale in Korea and Vietnam. By the beginning of the Vietnam War, the plane already looked like an anachronism, but, nevertheless, it was used no less successfully than jet machines. It is not known where and when Skyraider made its last combat mission. But it is authentically known that several such aircraft took part in the armed conflict in Chad in 1979. 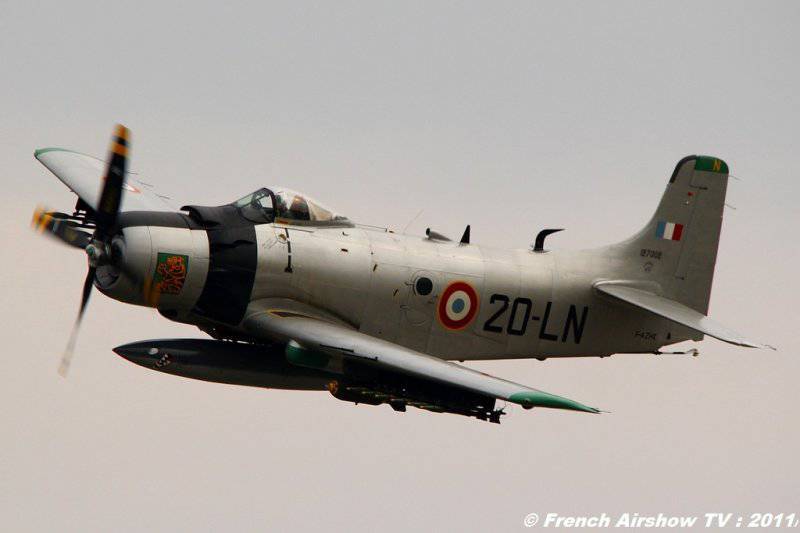 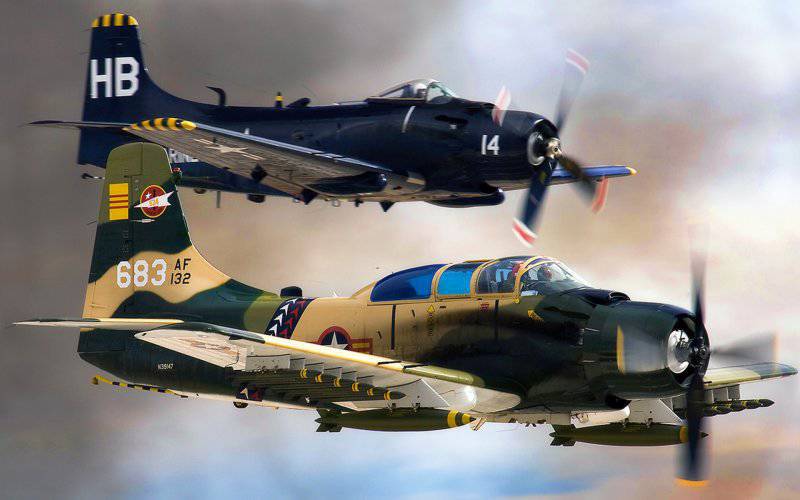 Finishing the life story of this wonderful aircraft, I want to compare its fate with a similar-purpose machine created in the USSR at about the same time.
IL-10 attack aircraft, was built as a replacement for IL-2, taking into account the experience of combat use of attack aircraft and managed to take part in the last battles of World War II.
Its improved, modernized version, with enhanced weapons IL-10M, was launched into the series in the postwar period, was successfully used during the Korean War. He formed the basis of attack aircraft in the USSR Air Force, until its liquidation by Khrushchev at the end of 50, when hundreds of combat-ready aircraft scrapped.

Ctrl Enter
Noticed oshЫbku Highlight text and press. Ctrl + Enter
We are
An-12 in AfghanistanThe riddle of the SPB or why the dive bomber did not go into the series
Military Reviewin Yandex News
Military Reviewin Google News
34 comments
Information
Dear reader, to leave comments on the publication, you must to register.