And in our apartment - gas! Our atomic levers 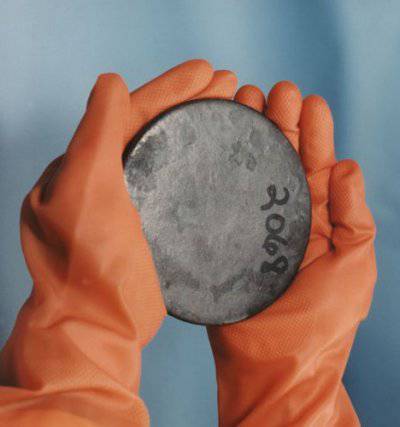 Good day, colleagues. This is the first article in addition to the words I have said about technological levers, as one of the tools in the confrontation with the United States and Western countries.


As I said earlier, these levers are not as much as we would like, but they are. In this article, I would like to touch on two areas of high technology, which are closely intertwined with each other and in which today's Russia managed to add something new to the potential preserved from the USSR, thereby increasing this potential. We are talking about nuclear power engineering in general and about such a concomitant and indispensable aspect of it, as the technology for the production of weapons and industrial Uranus.

From many members of the forum it is sometimes possible (though it has long been almost gone) to hear exclamations that Russia has sold all its uranium and weapons US plutonium for nothing and now on nuclear energy and nuclear weapons of Russia can put an end to. So - I have to upset these guys.

History with this “sold out” uranium, its roots go back in the last years of the existence of the Soviet Union. Relatively shortly before these events, in the context of the psychosis of the Cold War, the USSR and the USA, trying to overtake each other in the number of nuclear warheads, riveted so many warheads that the missiles themselves were not enough for their practical use. Judge for yourselves - by that time the USA had stocked 32000, and the USSR - 44000 such missiles and seriously considered plans to increase the number of these carriers. Since weapons-grade uranium is not a product of eternal storage, but has the properties of self-decay, it became necessary to put these deposits somewhere. And the Americans decided to use the extracted weapons-grade uranium, after appropriate refinement, in the nuclear power plants that had appeared by then. This method was much less expensive compared to fine-tuning it again to weapons condition. Weapon Uranus and Plutonium began to be diluted with low enriched Uranium and put into fuel at nuclear power plants. But these nuclear power plants were so voracious that soon the Americans realized that they could be left without weapons-grade Uranus and plutonium because the only enrichment enterprise was only a gas diffusion plant in Paducah, which was forced to plow both weapons and energy. Instead of the required 12 million SWUs, he hardly issued 8.5 SWUs, which, as we see, is catastrophically small.

Under these conditions, the United States, deciding that they, as always, the most cunning, came up with "peace initiatives" that were supported by the Soviet leadership, were widely spread by the Americans and allowed states with a lower degree of fear to increase their capabilities to provide their nuclear power plants with low-enriched low-enriched uranium . But, as it was not supposed, these nuclear power plants were so voracious that they forced the United States to sell the uranium extracted from the heads of the Soviet Union to the Soviet Union and then diluted to the necessary condition on Soviet capacities and return it to its “homeland”. On this basis, an agreement was reached on the sale in the USSR of 500 tons of weapons-grade uranium, about which compassionate people began to spread as if they were sold out to the domestic.

Subsequently, the Americans in the 1992 year, believing that they had successfully “shod” everyone, having saddled the Soviet uranium-enrichment complex, stopped their plutonium-producing reactor.

In Russia, taking into account the available reserves of plutonium and uranium ore, and taking into account the imminent appearance of a super modern reactor-breeder, its own reactor, similar to the American one, was stopped in 2010 year in Russia. By that time, the Union had already collapsed, the uranium deposits of Kazakhstan and Ukraine remained abroad, and the possibilities of the Russian Priargunsky deposit provided only half of the enrichment capacity of Russia. The Americans were denied further enrichment for reasons of lack of natural uranium for themselves. Fearing the downtime of their nuclear power plants, the Americans persuaded European uranium producers to sell Russian uranium at a lower price in order to provide their nuclear power plants with a consistent and proven process chain.

In general, the enrichment capacity of Russia today is provided with raw materials for 17 years. In addition, for all these years, the uranium reserves in the United States have significantly decreased due to the gluttony of their nuclear power plants, enrichment capacities, at least to the level of industrial ones, have not increased. Today, Russia is almost a monopoly (the capacity of some countries with centrifuges is not counted because of low power) a producer of plutonium. The United States nuclear power plants are sorely lacking fuel for the future, and therefore the United States, with enviable persistence, continues to insist on various agreements to limit and reduce nuclear weapons. The situation is very, very difficult in the matter of providing fuel to its nuclear power plants not only in the US, but also in their European allies. That is why Americans pay all Green lobbying for the closure and construction of new NPPs around the world in order to draw off the small reserves that are in stock for themselves.

Today, US uranium reserves will hardly scrap 300. while in Russia this figure is 800 m. of free weapons-grade uranium. The US only enrichment, privatized, and then safely bankrupt under schemes that were widely implemented until recently, and here, USEC is in the corral at a time when Russian centrifuges spin without a break for lunch and sleep-hour. Of course-a mess and blame him-Putin.

ATOMIC INDUSTRY
Well, and inextricably linked to the topic of uranium and plutonium - the topic of nuclear energy. In the energy sector, Russia in foreign markets will be represented by Rosatom, which today has a portfolio of overseas orders worth more than 50 billion for the next 10 years. The number of contracts for the construction of nuclear power plants abroad is 21 power unit in nine countries. Moreover, intergovernmental agreements have already been signed on the 19 blocks. We are talking about countries such as China (four blocks), India (four blocks), Belarus (two blocks), Armenia (one block), Ukraine (two blocks), Vietnam (two blocks) and Turkey (four blocks).

At the same time, the government sets ambitious plans for energy equipment manufacturers: by 2020, the export of energy equipment must reach in terms of 10 GW capacity per year (in 2012, it will be only 3 GW).

Moreover, exports will be increased not only at the expense of Rosatom, but also due to the export of hydraulic and steam turbines that are used in the construction of power plants. Today 38% steam turbines manufactured in Russia are exported, hydraulic turbines 63%, gas turbines 28%. However, Russia is now focusing on the production of small and medium-sized turbines, in order to conquer foreign markets, it is necessary to produce, among other things, high-capacity turbines, and so far only one company is involved - Power Machines. The fact is that the production of high power turbines will allow the creation of large power units (more than 400 MW).

In accordance with the Energy Strategy of Russia for the period up to 2030, by 2030, Russia will have to take 15% of the global power engineering market against the current 2%, that is, overtake Siemens (now they have 10%) and catch up with Alstom (16%).

In conclusion, I would like to preface the question of whether the stated information and the Russian achievements described in it can be used as leverage. Yes, it can be taken into account that the countries that are vitally dependent on Russian technology are allies of the United States, and the pressure can be exerted on the enemy and through the impact on its allies, as Israel today is putting pressure on Lebanon, threatening to destroy all of its logistics infrastructure, if Lebanon will support Hezbollah fighters. And the fact that we have such achievements today is a vivid confirmation that they are needed in the modern world.

In the next article I will summarize information about our technological capabilities in the field of aircraft and engine-building.

Ctrl Enter
Noticed a mistake Highlight text and press. Ctrl + Enter
We are
Why did the Russians give their uranium to the USA? And did they give ...Uranium enrichment: Iran has managed to master technologies that are not available for the US
177 comments
Information
Dear reader, to leave comments on the publication, you must to register.