21 May - Day of the Military Translator 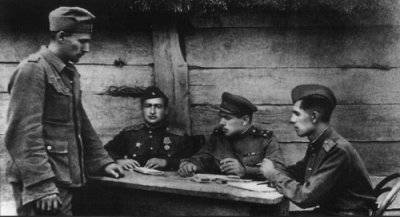 The profession of a military translator is perhaps one of the most ancient military professions. Its relevance and importance is due to the obvious fact that the absolute majority of wars in the world stories It was conducted between nations speaking different languages. In Russia, the profession of a military translator (interpreter - interpreter; dragoman - ambassadorial translator, oriental languages) is known almost from the beginning of the formation of a centralized Russian state - since the Byzantine campaigns of the Slavs.


A separate service, professionally engaged in the translation of foreign languages, appeared in Russia in the XVI century. In 1549, the Ambassadorial Department was established under the command of Ivan Viskovaty, whose staff consisted of a 22 translator and 17 interpreters who owned dozens of foreign languages.

Until a certain time, the practice of diplomatic and military translation was uniform and did not have any fundamental differences. The situation changed with Russia's assertion of the status of the empire, with the expansion and increase of the perimeter of its borders: with access to the Black Sea, the Far East and Central Asia. It was not for nothing that officer courses opened in 1885 during the separation of Oriental languages ​​of the Asian department of the Ministry of Foreign Affairs became the first educational institution that trained translators for military purposes. The courses of translators immediately gained immense popularity among the officers, the competition exceeded 10 people into place - the profession of a military translator was prestigious at all times. The translating officers served in the countries of Asia, in the Caucasus and in the newly annexed territories of the Asian military districts as chiefs of counties, bailiffs, officers of the border guards.

The next step, which accelerated the formation of a full-fledged personnel reserve for military interpreters of the Russian army, was the opening of the Eastern Institute in Vladivostok in 1899. The training program for orientalists included, in addition to the obligatory English and French, Chinese, Japanese, Korean and other Asian languages, depending on the country specialization chosen by the students. Increased attention to the training of Orientalists in the country was not accidental. It is no secret that the sovereign emperor Nicholas II chose the Far East as one of the priority directions of foreign policy, which was a century ahead of his time, because today the Asia-Pacific region is considered the most intensively developing and promising region of the planet, for the influence on which the real geopolitical wrestling.

A significant contribution to the language training of personnel was also made by foreign language courses opened at the headquarters of military districts, which was a consequence of the development of the armed forces as a whole. For example, in 1895, after receiving information about the introduction of Russian courses for officers by the German command, German courses were opened in the Vilna military district - World War I was just around the corner ...

The war and the subsequent catastrophic events that destroyed the country to its foundations left practically nothing away from the successfully functioning system of training military interpreters and orientalists.

The history of military translators of the Soviet period begins with the order of the Revolutionary Military Council of the USSR SS No. 125 of 21 in May 1929 of the year. Under the influence of increasing international tensions and the evidence of inevitable wars, the profession of a military translator became increasingly in demand. The country is reconstructing the system of training military translation specialists: the Eastern branch of the General Staff Academy opens (later the Eastern Division of the Academy, then the Eastern Special, then the 4 faculty of the MV Frunze Military Academy, then the Military Institute of Foreign Languages, later transformed into the Military Institute of the Ministry of Defense of the USSR). Today, the corresponding institute is included in the structure of the Military University as a faculty.
Ctrl Enter
Noticed oshЫbku Highlight text and press. Ctrl + Enter
We are
Day of the military translatorMay 21 in Russia celebrates the day of the military translator
19 comments
Information
Dear reader, to leave comments on the publication, you must to register.