Italian masons and gold of Yugoslavia 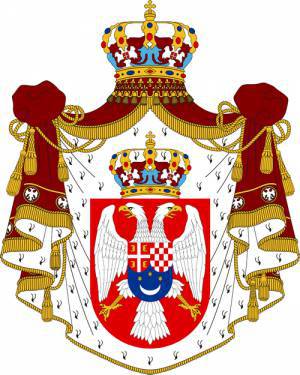 14 January 1953, Marshal Tito became President of Yugoslavia. Until now, many historians say that he built socialism, relying on the gold of the royal Karageorgievich dynasty. And when the money ran out, Yugoslavia fell apart.


Major figure of the Communist International Maurice Torez and the leader of the USSR Joseph Stalin gave the marshal a great fortune of the Kingdom of Yugoslavia. Mysterious история with a gold reserve of Karageorgievich began in the spring of 1941, when the Luftwaffe planes dropped thousands of aerial bombs on Belgrade every day. It was clear to everyone that Hitler was soon occupying the country.

The king of Yugoslavia, Petar Karageorgiyevich, together with his new government, decides to remove from the capital the entire state reserve, first to Montenegro, and then to Egypt. 60 tons of precious metal was packed in 1300 wooden suitcases. A special train consisting of 57 wagons set off with all the precautions. Exactly one month it took the “golden echelon” to get to the port of Kotor on the Adriatic. Together with the state reserve Petar Karageorgiyevich and his retinue took out a lot of personal valuables and currency.

It was not possible to overload the gold onto the ship: the Italian fascists had already practically occupied Montenegro. In the mountains, where the haiduks once hid the loot, a cave was found, where all the 60 tons of gold of the Kingdom of Yugoslavia were hidden. King Petar, taking with him only a trifle for personal expenses, fled to London.

Before 1943, the Italians were sure that the gold was taken to Egypt, but someone brought the Nazis to the cave. Mussolini immediately gave the command to ship gold to Rome, naturally, without informing his associate Adolf Hitler about this. The operation was led by a young fascist Licho Jelly, who, in a special hospital train, where the soldier 73 was allegedly infected with smallpox, bypassing Hitler's cordons, reached Trieste. There, he officially handed over 8 tons of precious metals to the manager of an Italian state bank, and he hid the remaining 52 tons. Realizing that the duce would not last long, Jelly prepared for life under the new government.

At the end of 1944, Jelly met with the leader of the Italian Communists, a great friend of Stalin Palmiro Togliatti. He was at that time a member of the coalition government of Italy. Comrade Tolyatti petitioned for the rehabilitation of the former fascist, for which Jelly donated Palmiro Tolyatti another 27 tons of gold. He did not say a word that he had stolen 60 tons in Yugoslavia and pocketed the rest of himself - 25 tons of jewels.

After the end of World War II, Palmiro Tolyatti handed Licho Jelli a “gift” to Josip Broz Tito, the new owner of Yugoslavia, who began to build socialism on the Karageorgievich gold reserves. After a quarrel with Moscow in 1948, Tito still received 30 billions from the US for free. Until the end of his days Marshal Tito idolized gold, he adored jewelry and luxury.

Licho Jelly outlived all his masters. In April of this year he will be 94 of the year. After the war, Mr. Jelly became the owner of a printing house in Pistoia, then he took up the furniture business. In 1962, he was accepted into the Masonic Lodge of "Propaganda-2", in 1969 he became its secretary-organizer, then he was elected Grand Master. After the official closure of the lodge in 1974, it actually turned it into a secret political society.

Jelly created 25 front companies in Liechtenstein, Luxembourg and Panama, accumulated contacts with the Reagan administration, maintained contacts with the President of Haiti Duvalier and the closest circle of Argentine President Peron. His personal fortune grows with estates in Chile and Paraguay, houses and apartments in Mexico and Brazil. Mr. Gelli is actively cooperating with the CIA and tirelessly dangle around the world, but most often in the United States and Latin America and controls everything. That was before the start of the 1980s.

But the "black times" came. In 1981, leaving Wanda’s villa before the police arrived, Jelly, warned about the Carabinieri’s visit, didn’t manage to dig up a safe in the garden with a part of Yugoslav gold and a list of members of the Masonic Lodge. There were 3 minister, 23 MP, 10 prefects, 10 generals of the Carabinieri corps, 7 generals of the financial guard, 6 admirals, 83 president of state companies, 12 general directors of banks and without an account of judges, prosecutors, officials. The parliamentary commission that promulgated the lists of the Propaganda-2 lodges with 972 surnames, recognized them as genuine, but "incomplete." And at the head of the box was Licho Jelly.

Later there was the removal of 120 million dollars from one of Geneva’s banks, arrest and jail, escape and after a few years a new arrest. However, instead of 12 for years, Jelly received only a written undertaking not to leave the place. Wanda's villa was confiscated by the state, but after several unsuccessful sales auctions, Licho Gelli was entrusted as the custodian in charge. In recent years, he retired and wrote lyric poems and short stories.

Jelly is one of the most controversial characters in Italian politics. Masonic Lodge "Propaganda-2" in 1974-1981 was the center of intersection of interests of politics, business, military circles. Now society has changed, people at the top of power are different. But Jelly does not like to remember his past life: the talkers do not live long. Silence is gold. After all, until the end of the performance is still far away.

Ctrl Enter
Noticed oshЫbku Highlight text and press. Ctrl + Enter
We are
History of the Air Force and Air Defense of Yugoslavia. Part of 10. NATO aggression against the Federal Republic of Yugoslavia. Part of 1Diplomats of the People's Commissariat of Defense: on the eve and during the war
Military Reviewin Yandex News
Military Reviewin Google News
2 comments
Information
Dear reader, to leave comments on the publication, you must to register.