Not the death of Suvorov struck ...

21 May 2013
29
May 18 - Alexander Vasilyevich Suvorov Memorial Day. Explanations, titles and titles - this is the tenth case. We remember the Soldier. Winner Recall the best epitaphs dedicated to Suvorov. 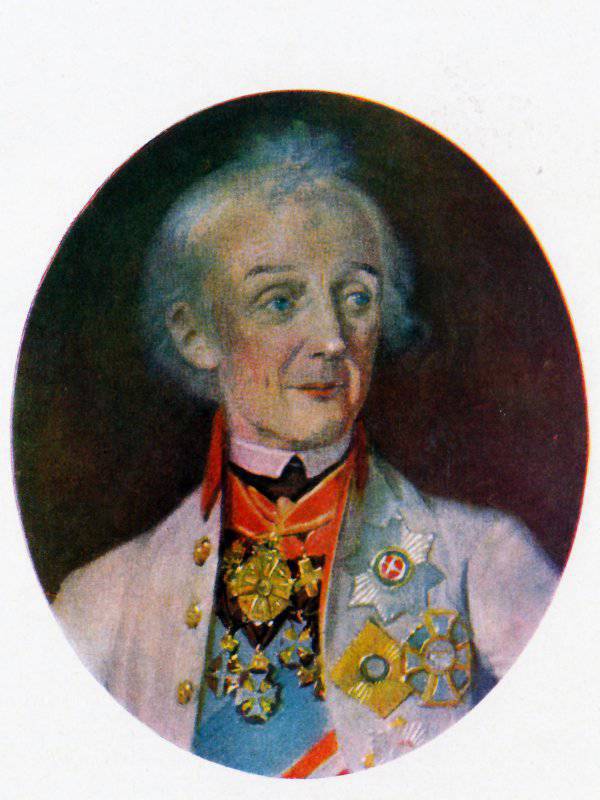 A wonderful portrait of Suvorov was created at the end of the 19th century by artist Valentin Serov.

Archimandrite Yevgeny Bolkhovitinov, the future Metropolitan of Kiev and Galitsky, a friend of Derzhavin, an admirer of Suvorov, a gifted writer and historian, spoke of a nationwide farewell to the commander:

“I was in the procession and therefore I can briefly describe the ceremonial to you. The prince lay in field marshal's uniform, in the St. Andrew's ribbon. Around the coffin were stools, 18 number, they were laid out cavalry, a diamond bow, granted by Empress Catherine the Second for the capture of Ishmael and the feather for the capture of Rymnik, a diamond sword, field Marshal's baton and others. The prince's face was calm and wrinkle-free. The beard has grown half a inch and is all white. There is something reverent and calm in the physiognomy ... Streets, all the windows in the houses, balconies and roofs were full of people. The day was beautiful. People everywhere ran after us. Finally, we reached the ceremony and entered the ceremony into the upper monastic church ... Only big people were allowed into the church, but they were not allowed into the monastery. There was no sermon. But then court singers 90-th psalm “Live in Help” sang out better than any panegy, a concert by Bortnyansky ... The troops were located behind the monastery. Opto burial, and here ten times I could barely hold back tears. At the last kiss, no one came to the coffin without tears. Derzhavin also appeared here. His bow to the coffin touched my heart to the base, he covered his face with a handkerchief and walked away, and an immortal ode will surely pour out of these tears ... ” Derzhavin, Bolkhovitinov, Bortnyansky - the brightest personalities of that time united in a respectful bow to the deceased Suvorov; and each illuminated the death of Suvorov with his talent. 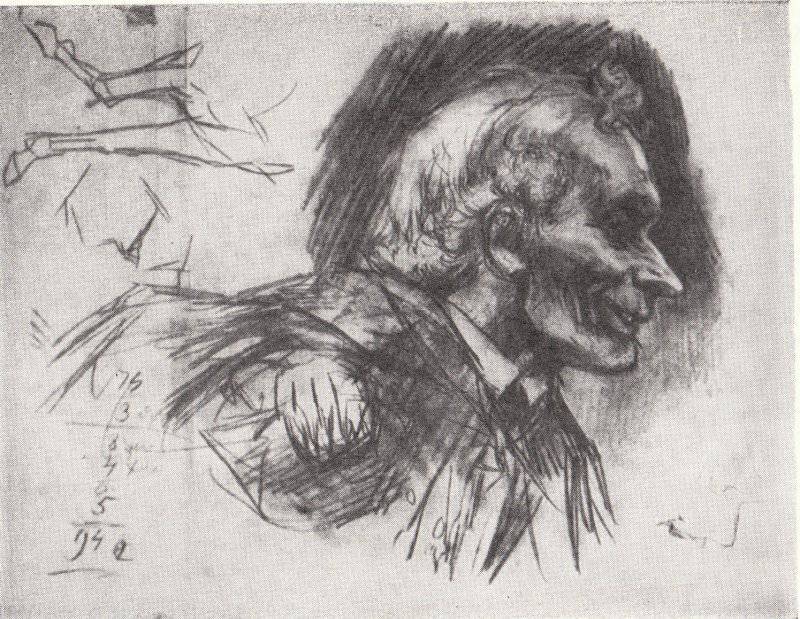 Father Yevgeny looked into the water: Derzhavin responded to several verses at once with Suvorov’s death. Demolished, he returned to Fontanka from the hero’s funeral; thoughts about Suvorov did not leave him. "The author of the cell was Snigir, learned to sing one knee military march; when the author, after the reproduction of this hero, returned to the house, then, hearing that this bird was singing a military song, he wrote this ode in memory of such a glorious husband ”. Only five years later in the “Friend of Enlightenment” a poem “To Snigir. After the death of Prince Suvorov ", with a note:" This play was sent from the unknown. " This work of Derzhavin was already familiar to many - and still “from the unknown”:

What are you starting a war song for?
Flute like, cute snigir?
With whom do we go to war with Hyena?
Who is our leader now? Who is the hero?
Strong where, brave, quick Suvorov?
The thunder of the North lies in the coffin.

Worthy start - tragic chords. But then - the main thing:

Who before the army will be,
To ride a nag, there are biscuits;
In the cold and the heat of the sword tempering,
Sleep on the straw, watch out until dawn;
Thousands of armies, walls and barriers;
With a handful of Russians to win everything?

During the lifetime of the commander, the emperor ordered him to erect a monument in Petersburg. Paul was master of his word: he wanted - he gave, he wanted - he took it back. Still, the sculptor Mikhail Kozlovsky, by that time already terminally ill, worked on the monument to the hero. He portrayed Suvorov in the form of the Roman god of war - Mars. The similarity was found only in a swift pose. 5 May 1801 on the Field of Mars - one year after Suvorov’s death, two months after Paul’s death - the military and civilians greeted the opening of the monument with glee. Roman god on the field of his name! And Derzhavin did not get Mars with a shield and sword, but a genuine eccentric and commander of the times of Catherine and Paul, a contemporary, chief and friend of the poet. 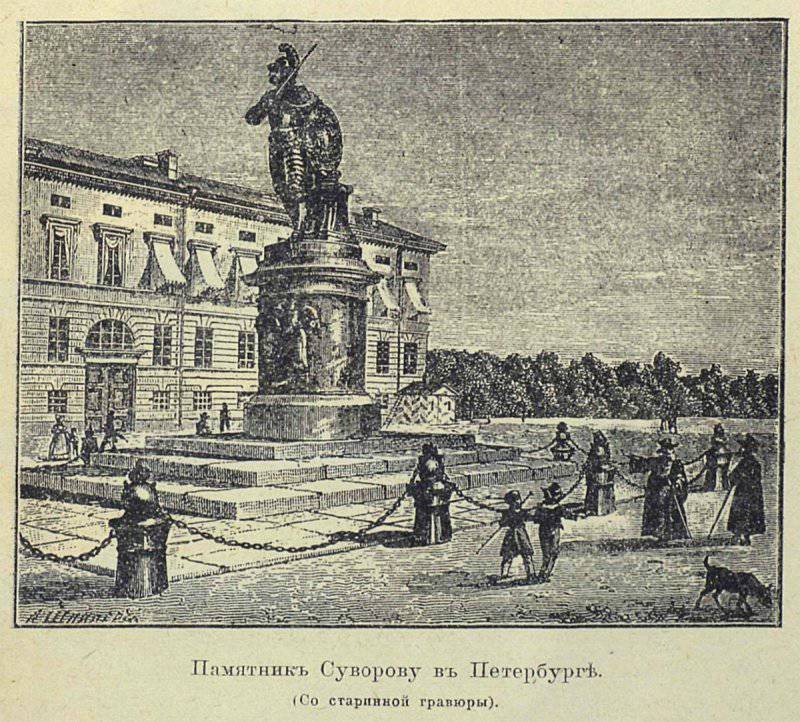 Let us recall Derzhavin’s famous epistolary response to the death of Suvorov: “Truly, it’s good in such glory outside and in such disrespect inside to end the century! This is a true picture of an ancient great husband. Here is a lesson that there is a man. " Gavrila Romanovich (knowledgeable man) considered the commander to be a victim of court intrigues, this bitter feeling oppressed the poet.

That is why another poem remained hidden for a long time, it was even dangerous to publish it even on behalf of an unknown person:

Triumphed - and grinned
Inside the strangling of his tyrant,
That thunder did not miss him
What did the last blow give them
Invincible hero,
Which in the thousandth battle
Fought hard with him soul
And despised threats of fear.

And then - the main thing:

No, not a tyrant, not fierce rock,
Not death "..." struck:
Gingerbread, glory to God
Archangel Michael
Sent, heavenly leader of the forces
Let the leader of the earth bring him
Accept retribution crown,
Like a ray from a vault of blue ...

The secret of the tenth line of this poem is easy to guess: "Not death ... struck." Of course - Suvorov. Derzhavin was afraid to directly enter this name in the notebook: then the anti-Paul orientation of the unfinished ode would have become clearer ... In our view, the emperor Paul turned into a victim - and he was the victim of a bloody conspiracy. But contemporaries (especially the nobles) considered him a “despot and corporal on the parade ground”, no more. In addition, the emperor in the last weeks of the life of Suvorov and really subjected the terminally ill old man to unfair disgrace. But it was precisely the Suvorov glory that brightly lit up the years of the rule of the emperor-eccentric. 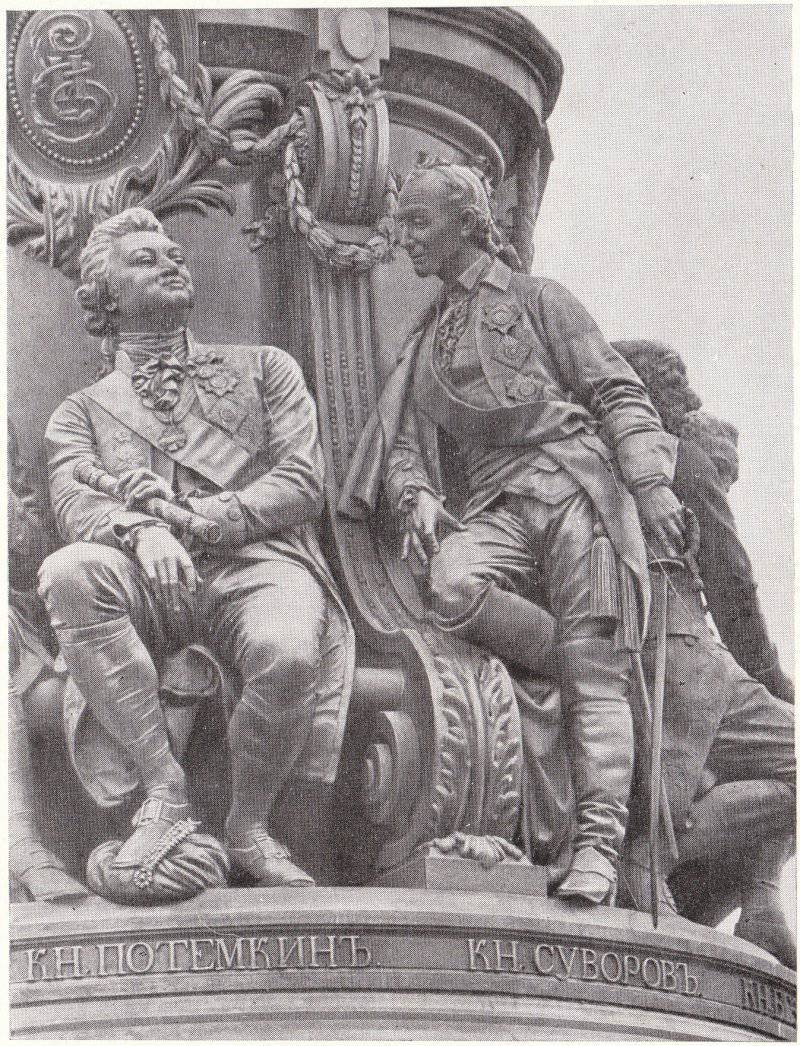 Suvorov did not let Derzhavin. Again and again he wrote about him:

End, eternity,
Those disputes are infinite,
Who is more of your heroes was.
End the infinite controversy.
In your sanctuary entered
From us Suvorov.

Derzhavin invented a magnificent and laconic epitaph for the grave of Suvorov, quite in the spirit of the great hero. "HERE LIES SUVOROV" - and Alexander Vasilyevich, according to legend, warmly endorsed this idea. Who in Russia does not know his protector, the old soldier? But the fate of the epitaph was not so easy ... On the tomb of Suvorov in the Alexander Nevsky Monastery, an authentic inscription was knocked out: “Here lies Suvorov. Generalissimus Prince of Italy Gr. Alexander Vasilievich Suvorov Rymniki, was born on November 1729 of November 13 of his day, passed away on the 1800 of his year on May 6, and his namesake was Nov. 24go. So it is more familiar, but also more banal.

The will of Suvorov and Derzhavin was performed only fifty years after his death. This is the grandson of the commander, Alexander Arkadevich Suvorov, in the 1850-m restored justice. Since then, in the Alexander Nevsky Monastery, in the lower Annunciation Church, near the left choir, the brightest of the Russian epitaphs is carved on the tombstone: "Suvorov lies here." 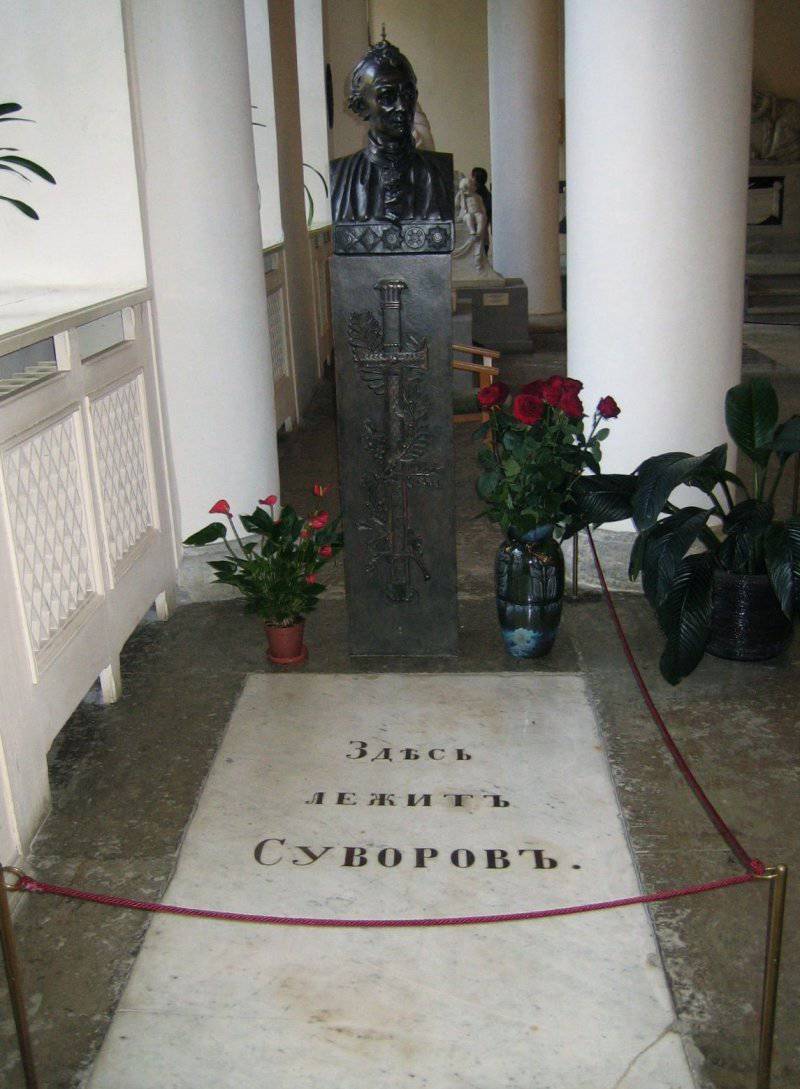 Another, similar to “Snigir”, peak of Suvorov poetry is a poem by Admiral A. S. Shishkov, in the future - the ideologist of the Russian victory of 1812. Shishkovskaya epitaph Derzhavin is well known to the audience of the Pudovkin film "Suvorov". In this film, the general himself (contrary to historical the truth) in Konchansky recites the Shishkovsky epitaph:

Stop the passerby!
Here man lies on mortals unlike.
On the wing in the middle of nowhere with a deacon, he sang with a bass,
And glory as Peter Il Alexander thundered.
A cold water poured over me
And the fire of courage poured into the hearts of the people.
Not in armor, on horseback, like a Greek hero,
Not with a shield golden, decorated more than all,
With a whisk in his hands and a Cossack nag,
In one summer he took half a dozen he Troy.
It is not invested in Brno, not on a high hill,
He scolds the bloody calm eye measure,
In a shirt, in a sisak, in front of the troops on horseback,
Like lightning flashed and struck like thunder.
He walked with shelves where birds fly a little.
He lived in simple huts, and conquered the capital.
I got up on roosters, fought on bayonets;
Alien people wore it on their heads.
One meal with soldiers ate.
Kings to him in the relationship, he was not to them, was due.
There was a two empire leader; Europe surprised;
He planted kings on the throne, and slept on straw.

In the Suvorov epitaph, Admiral Shishkov surpassed himself: this is undoubtedly the most outstanding example of his poetic work. The mythologized confrontation of the metropolitan "Conversations ..." and the Moscow "Arzamas", shishkovisty and Karamzinists, was not a battle of the talentless and talented, gray and bright. “Arzamas” remained in Russian literature - Pushkin, Zhukovsky, Vyazemsky, many others - and participants in the “Conversations ...”: Krylov, Derzhavin, young Griboedov, Shakhovskaya and Bobrov. The tails of graphomania and literary militancy of the noble Shakhovsky were not eclipsed in the "Conversation ..." Derzhavin traditions. The Suvorov epitaph of Shishkov, made in Derzhavin traditions and with the original talent of a scientist and admiral, was written before the “Conversations ...” and became the most popular epitaph of Suvorov. 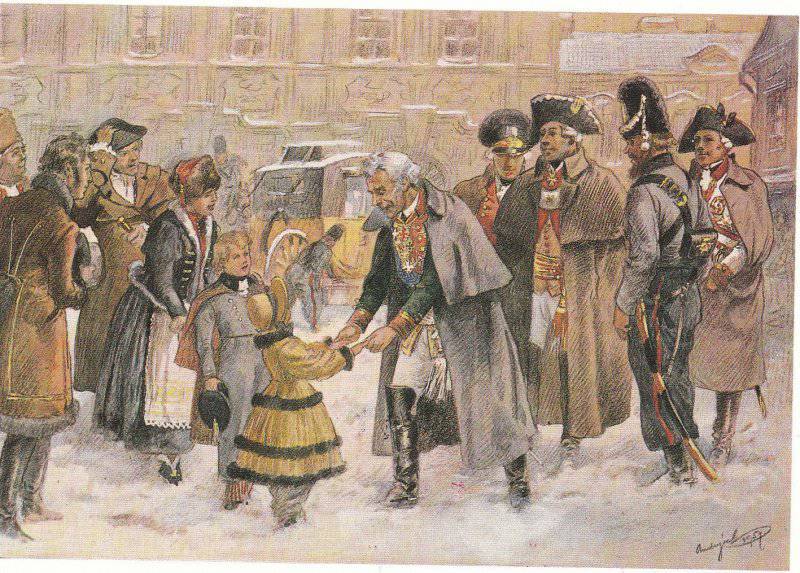 Shishkov felt the texture of the Suvorov miracle - in his epitaph there is a soldier-worshiper, a stoic and a favorite of glory. The key to unraveling the Suvorov phenomenon in Shishkov is the "dissimilarity" of the commander to other mortals, contrasting images that scratch the reader's imagination. Each line of the poem reveals a new facet of this "dissimilarity." I think that the creators of Suvorov’s film biography in their actual wrong were psychologically right: Suvorov would have liked the Shishkov poem, he would have put him in line with his favorite creations of Derzhavin, ancient poets and the McPhersonian Ossian, whom Suvorov loved by translating Yermil Kostov. Shishkovskaya “The inscription to the monument to Suvorov on Tsaritsyn Meadow” deserves attention (note that after the installation of the monument to Suvorov, Khvostov wrote, no less than one, to the sculptor Kozlovsky):

For the treatment of all European eyes
On this image, in copper shining between us,
Do not need a poem voice;
Enough to say: this Suvorov!

We failed, did not dare to forget about Suvorov. Only in Russian culture do we meet the universal worship of the heroes of the past centuries, who remain for us a lesson and a secret parable. Honoring Suvorov among the people is a real miracle. Alexander Vasilyevich inspires, inspires and turns into winners those who open his heart. For modern Russian people, Suvorov means more than, say, Nelson for the British. He was not eclipsed by the heroes of the stadiums, blockbusters and commercials ... At the beginning of the twenty-first century, Alexey Korovin wrote good poems in memory of Suvorov:

May sixth day
Cathedral bells
Complained, ringing.
So Suvorov died,
Warrior, all my life in the ranks
Motherland served,
Before anyone in battle
Banner not folded.

The sixth day is, of course, in the old style. And nowadays, 18 of May serves the panikhida for Alexander Vasilyevich Suvorov. Prayers will be lifted to the sky from the Moscow “Suvorov” temple of Theodore Studite, near the Nikitsky Gate, and from dozens of other churches across Russia ... 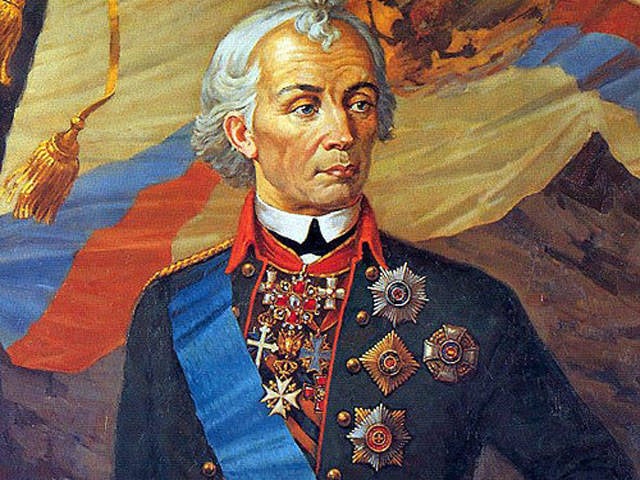 Ctrl Enter
Noticed a mistake Highlight text and press. Ctrl + Enter
We are
Congratulations on the 285 anniversary of the birth of the Great Russian commander Alexander Vasilyevich Suvorov!Marshall baton
29 comments
Information
Dear reader, to leave comments on the publication, you must to register.