21 May 2013
19
"RIA News, Izvestia and Interfax today submitted a government rating. According to a survey of experts and politicians, Viktor Ishayev was recognized as the most ineffective minister. 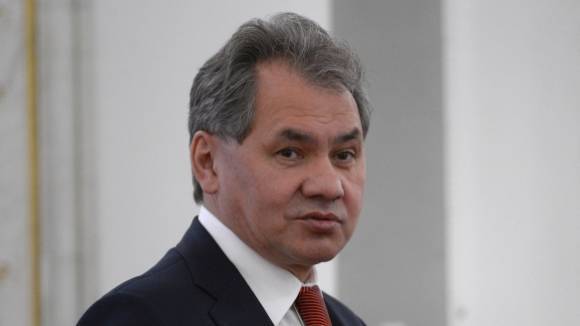 The rating was based on four indicators: experts evaluated the effectiveness, influence and popularity of ministers. The fourth point was the mentioning of politicians in the media, provided by the Interfax news agency. The final list consisted of all items, but the authors of the study recognized that some of the indicators are more important to them than others. Based on the fact that for a politician, influence and effectiveness are more substantial, they were given 40% specific weight in the overall ranking, and popularity and mentioning were left on 16% and 4%, respectively.

47 politicians, media managers and experts were invited to express their opinions, including former Finance Minister Alexei Kudrin, heads of both houses of the Federal Assembly, Valentina Matvienko and Sergey Naryshkin, former head of the presidential administration of Russia Alexander Voloshin and heads of major media outlets.

The top five leaders in the overall ranking are in the top positions in individual indicators. The head of the Ministry of Finance, Anton Siluanov, was recognized as the most effective minister, although he holds this position for about a year and a half, and the most influential is First Deputy Prime Minister Igor Shuvalov. The rest of the indicators leading Sergei Shoigu.

A spokeswoman for Maxim Topilina, Maria Isyanova, did not comment on the unpopularity of the head of the Ministry of Labor before the publication of official data, but said that the department was very much waiting for the results of this poll.

“Unfortunately, I don’t know the method of compiling this rating, so it’s premature to comment on its results,” Isyanova explained. Get a comment Victor Ishaev "Izvestia" failed.

Present Deputy Prime Minister Vladislav Surkov, who was dismissed in early May, is also present in the rating. However, his performance is low: the official is in the 14-th place (from 28), gaining the same number of points with the Minister of Education and Science Dmitry Livanov. In general, all the deputies of Dmitry Medvedev, except for Igor Shuvalov, showed results that were often worse than the ministers subordinate to them. So, Dmitry Rogozin took the sixth place, Dmitry Kozak - the seventh, Arkady Dvorkovich - the ninth, Olga Golodets - 11, and Alexander Khloponin turned out to be 19.

The results of an expert survey differ significantly from studies conducted among ordinary Russians. In early April, VTsIOM published a popularity rating for members of the Cabinet based on a survey of 1600 citizens.

The most unpopular minister was the head of the Ministry of Education and Science Dmitry Livanov, while in the rating compiled by politicians and media managers, he took a steady position in the middle - 13-e place. But the Russians are unsatisfactory about the work of Veronika Skvortsova, the head of the Ministry of Health (15-place in the ranking of experts) and Agriculture Minister Nikolai Fedorov (22 line). Viktor Ishayev, who took the last place in the rating of experts among Russians, turned out to be much more popular - he took the ninth place according to the results of the VTsIOM survey.

Dmitry Livanov told Izvestia that he did not intend to overestimate the importance of the fact that experts and politicians rated his work higher than ordinary Russians.

“Of course, I pay some attention to ratings, I try to familiarize myself with them, but I’m not going to overestimate their value, I’ll just continue to work,” the head of the Ministry of Education and Science assured.

In the top five leaders of VTsIOM, in addition to Sergey Shoigu, Sergey Lavrov and Dmitry Rogozin, the effectiveness of which was recognized by the experts, the Minister for Emergency Situations Vladimir Puchkov and the Head of the Ministry of Communications Nikolay Nikiforov also appeared.

Director General of VTsIOM Valery Fedorov notes that such discrepancies in the results are related to the fact that the survey was conducted among different categories of Russians.

- Ordinary Russians know little about the work of specific ministers, they hear only the loudest signals. Lavrov and Shoigu always hold high positions, as they are often mentioned in the media, the expert notes. - According to other ministers, people are judged by their industry profile. With 1970 – 1980-s, it is considered that agriculture in the country is ruined. Therefore, without knowing the details of the work of the Ministry of Agriculture, people put low marks on the head of this department. 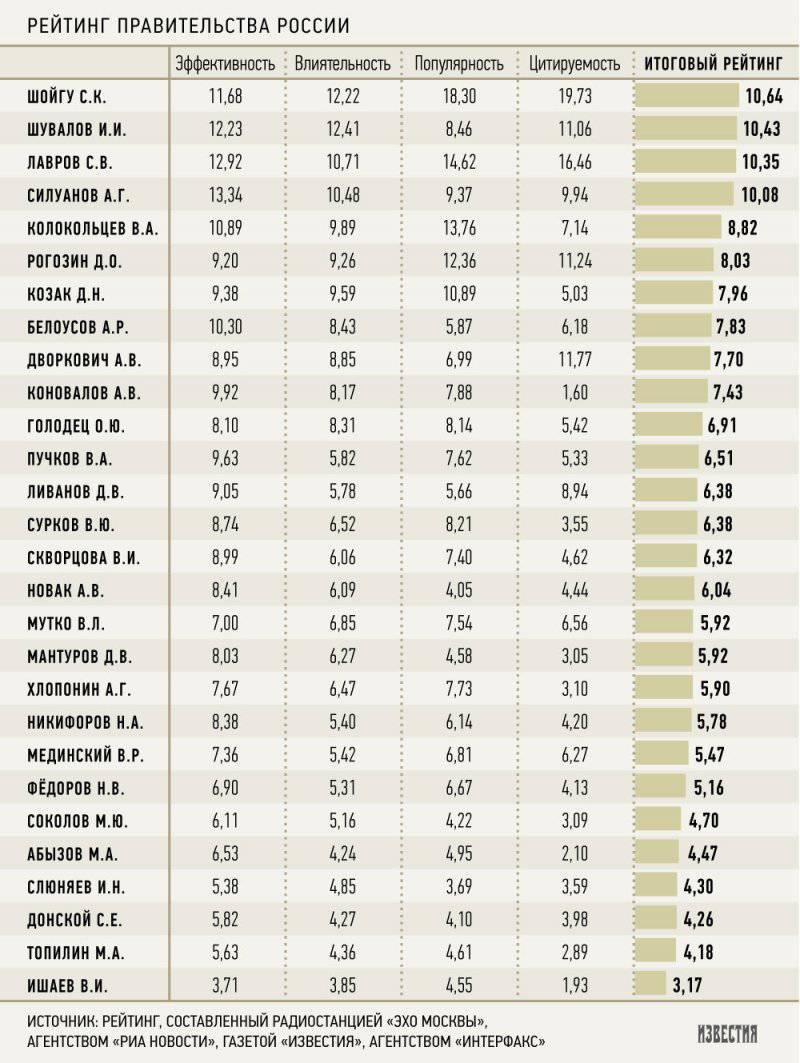 Ctrl Enter
Noticed a mistake Highlight text and press. Ctrl + Enter
We are
Report on the results of the survey-2013 "Evaluation of state political figures"Putin signed decrees on the structure and composition of the government. Anatoly Serdyukov Remains Minister of Defense
19 comments
Information
Dear reader, to leave comments on the publication, you must to register.