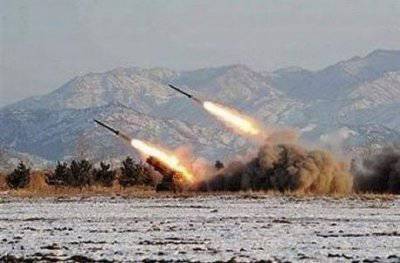 On weekends, Kim Jong-un began a provocative rocket game. On Sunday, a short-range rocket was launched from the east coast, as reported by "Lenta.ru" With reference to France-Presse, and before, on Saturday, the military from the DPRK launched three short-range missiles. All rockets fell into the Sea of ​​Japan. The type of missiles is unknown, although some assumptions of a potential enemy, I mean South Korea, on this subject are available.


As passed Interfax, the South Korean Ministry of Defense said about Saturday launches: “The DPRK launched two guided missiles this morning and another at noon. Rockets fell in the Sea of ​​Japan. ” "We need to conduct a more detailed analysis, it could be anti-ship missiles of the new modification or KN-02 missiles of the" earth-to-ground "class, an analogue of the Soviet SS-21 (RK" Tochka "), whose range is about 120 km," said the representative departments.

According to the South Korean media, the military of the DPRK could launch a land-sea KN-06 missile, whose range is 120 km.

Sergey Strokan (Kommersant) indicates that in response, Seoul called the missile launches "provocation" and placed its own missile systems near the borders with North Korea. “It is regrettable that North Korea is not stopping its provocations,” said Kim Hyun-Sok, a representative of the South Korean Ministry of Unification Affairs. And in the Joint Committee of the Chiefs of Staff of the Republic of Kazakhstan, they reported on the deployment of several dozen Israeli-made Spike multifunctional missile systems “Spike” on the islands of Pennendo and Enphendo, located in the Yellow Sea, near the border with North Korea.

With regard to Washington, the representative of the US National Security Council Caitlin Hayden said: “Threats or provocations from the DPRK will only deepen its international isolation. We continue to persuade the North Korean leadership to heed the call of President Obama and embark on the path of peace, to fulfill its international obligations. "

Thus, if Kim Jong-un, who continues to play military toys, still believes that it is possible to soften sanctions and negotiate assistance by means of war games, then in the USA, where only typhoons are rampant, but also a financial crisis, they prefer to persist. As a result, Kim Jong-un, who believes that the world, of course, is good in itself, but even better is the world with food, will leave its people without peace and without food.

However, this North Korean leader is much more stubborn than Barack Obama. Looks like he decided to launch rockets every day until the White House sent him food and money to the people.

As the 20 reported on May RIA Novosti correspondent Ekaterina Plyasunkova, on Monday, the DPRK again launched a short-range missile. This was reported by the agency "Renhap" with reference to representatives of the Ministry of Defense of South Korea.

They also write about this rocket that it fell into the Sea of ​​Japan.

As representatives of the South Korean Defense Ministry reported, the rocket was launched around 11.00-12.00 local time (06.00-07.00 Moscow time). Experts believe that this rocket was of the KN-02 type.

South Korean military officials reported that North Korea, in addition to dozens of Spike missile systems, deployed 76,2-mm guns 12 kilometers on the coast north-west of the islands of Pennendo and Enphendo.

And what about the DPRK? In response, the North Koreans placed 122 millimeter multiply charged launchers on land. Their range is 20 kilometers.

Journalist Andrew Salmon, who is now in the capital of South Korea, Seoul, said that short-range missile launches should not cause as much concern as launching a satellite or Musudan medium-range missiles.

"This is a tactical weapon short range If any other country launches the same weaponry, it will be recognized as an ordinary test, and no one will worry too much. This is really worrisome only because North Korea does it, ”he was quoted as saying. CNN.

In addition, South Korean officials have not yet reported that at least one of the missiles was directed south.

Nevertheless, National Security Director Kim Chang Soo from the presidential office in Seoul responded to the latest launch by demanding that North Korea stop launching missiles. The launches, if they were meant to test Pyongyang’s weapons or to demonstrate firepower, lead to “increased tensions,” he quotes. "New York Times".

“North Korea again launched what appears to be the KN-02 short-range missile. We will closely monitor the redeployment of the North Korean military in case of further launches, ” International Business Times the words of an unnamed official spokesman for the Ministry of Defense in Seoul with reference to the Renhap agency.

No sooner had the media dealt with the five missiles, as the sixth flew.

As the «Bloomberg», if the fifth rocket fell in the waters off the east coast between 11 in the morning and noon, the sixth fell between 4 and 5 in the evening. This was announced in Seoul by the representative of the South Korean Ministry of Defense Kim Min Sok.

Finally, there was information about what the North is launching rockets for. From the DPRK on the evening of May, 20 stated that the country was exercising its right to conduct missile tests as part of regular military exercises.

“The North is likely to experience these missiles as an armed protest against recent military exercises conducted jointly by the United States and South Korea,” said Yang Mu Jin, a professor at the University of North Korean Studies in Seoul.

Indeed, the official North Korean Central Agency News stated that rockets are being tested to contain the growing threat from the US and South Korea.

Southerners do not note at the moment any unusual movements of North Korean troops. The RK military "is closely monitoring the situation" and are ready to respond to any escalation, a spokesman for the Ministry of Defense said.

Hong Lei, a spokesman for the Chinese Foreign Ministry, said: "We hope that in the present circumstances, all parties will do what will help ease tensions and improve relations."

Bloomberg recalls that earlier the United States and South Korea have repeatedly called on China, North Korea’s largest trading partner, to make more efforts to enforce sanctions on North Korea’s nuclear program. China State Bank closed the account of North Korean lending in early May, which indicates a possible change in the position of Beijing.

Observed and translated by Oleg Chuvakin
- especially for topwar.ru
Ctrl Enter
Noticed a mistake Highlight text and press. Ctrl + Enter
We are
Kim Jong-un is alive, but walks with a caneModerate reformer
29 comments
Ad