Serhiy Komkov: The Law on Education will stimulate the growth of corruption 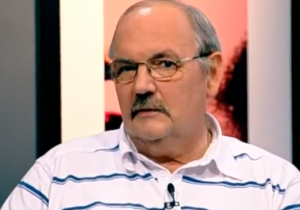 In the past six months, the Ministry of Education and Science has paid quite a lot of attention to reforming the Russian education system, both higher and secondary. We are talking about the introduction of monitoring the effectiveness of universities and the adoption by the State Duma of the Law on Education, which will come into force on September 1 of 2013 September. This law does not abolish free education within the framework of new standards. However, the school has the right to take fees for classes above the standards. Both of these innovations have caused general indignation: both in the scientific community and in simple families where there are children. President of the All-Russian Education Foundation, Doctor of Pedagogical Sciences, Professor, Academician of MANPO Sergey Komkov told the First Anti-Corruption Media about what is actually happening with the education system, what will this reforming lead to, and also corruption in education.


- Recently, they have increasingly begun to talk about the fact that soon most of the subjects of secondary education in Russia will become paid. What do you think is the probability of this? Is it possible that secondary education will be paid and under what conditions?

- Indeed, in recent times there has been a tendency that all subjects of the developmental plan (ISO, music, plastic, construction, choreography, rhythmic gymnastics, etc.) will be given for an additional fee. This is due to the fact that the developmental activities were included in the category of additional education. Over time, additional hours of a foreign language will be transferred to a paid basis. And then it is possible to transfer to an additional payment for hours of in-depth study of certain items. Mandatory, that is, payable at the expense of the budget, may remain the entire 3-4 of the subject. Everything else will go at the expense of the parents' wallet. Thus, remaining formally free, education will in fact be paid.

- The monitoring of universities this year showed its inefficiency due to the imperfection of the selected evaluation criteria. However, the Ministry of Education and Science did not stop at this, new criteria were introduced, which in turn also raise many questions. What is waiting for universities in connection with the introduction of annual monitoring?

- The whole trouble is that it is still unclear for what purpose the definition of the so-called "efficiency" of the activities of universities was carried out. It is not clear what the Ministry of Education means by the concept of "efficiency." What kind of "effect" of the activities of the university in question. Experts from the educational community were not involved in the definition of the “effectiveness” criteria. The criteria are purely formal. And this led to a sharp rejection of the “effectiveness” test by the heads of the universities. In fact, it was mainly about the "efficiency" of budget spending. And it was done very illiterate and incompetent. If this kind of “monitoring” will be held annually, it can lead to a sharp surge of discontent with the policies of the Ministry of Education and Science and the Government of Russia. First of all, from the side of students. Since it is very sharply striking the interests of students, it creates a nervous atmosphere and uncertainty about the future.

- As practice shows, with the advent of new rules, there are ways to circumvent these rules. Would not the monitoring of universities lead to the appearance of corruption in this connection?

- Undoubtedly lead. Since some of them will have the opportunity to avoid an unpleasant procedure for a certain bribe, while others will have a very quick and without any problems getting a substantial increase in their official salary.

- How much money will be allocated for monitoring? Is this rational use of budgetary funds?

- I do not know how much real budget funds will go for it. But, since the effectiveness of this kind of “monitoring” is zero at best, and at worst can lead to serious social consequences, these budget expenditures will work not for, but against the system of higher professional education in Russia.

- The Ministry of Education and Science will hold the USE as the sole and main form of the final assessment of students for the secondary school course, so this provision has been included in the new Law “On Education”. The USE was imposed on Russia by American “advisers” with a single goal: to end the fundamental, classical education system, which made it possible to prepare an intellectually developed person. Translation of the final certification to a standardized test basis in the Russian school led to the restructuring of the whole teaching process in the senior (and later it expects lower levels of the educational system) classes. The United States went through this stage from the beginning of the 70's to the end of the 90's. And it ended for them the actual collapse of the entire education system. Now they are trying to make a similar “experiment” with our country. And this may end not only with the collapse of the Russian education system, but also with Russia as a whole.

The USE was imposed on Russia by American “advisers” with a single goal: to end the fundamental, classical education system, which made it possible to prepare an intellectually developed person.

“After the scandals associated with the discovery of plagiarism in dissertations, Dmitry Medvedev ordered the creation of a new Antiplagiat system to test scientific works. How will it differ from the existing one? Does it make sense to create a new one, because it takes a lot of money? Will there be any benefit from it, and why has the existing system of plagiarism verification of scientific papers not been widely used in universities until now?

- No Antiplagiat system will help until the labor relations system changes in Russia. This is especially true of the requirements for representatives of the bureaucratic apparatus. Every official wants to have a degree certificate. This gives him career growth and additional prestige. In addition, it is necessary to radically change the system of assignment of academic degrees. This should not be dealt with by administrative bodies (that is exactly how HAC is in Russia), but independent Scientific Committees having recognition (accreditation) in the relevant scientific associations of Europe.

- Is it possible to defeat corruption in education? How is the fight against bribery and bribery, in addition to the regular checks of the Ministry of Education and Science?

- Never and under no circumstances has corruption been defeated by those who are the main source of this phenomenon. The administrative apparatus itself is a hotbed and conductor of corruption. Therefore, no “check” of the Ministry of Education and Science will ever reveal the facts of corruption. This can be done only with maximum public control and with a clear work of law enforcement agencies. Other options world practice does not know.

Never and under no circumstances has corruption been defeated by those who are the main source of this phenomenon. The administrative apparatus itself is a hotbed and conductor of corruption. Therefore, no “check” of the Ministry of Education and Science will ever reveal the facts of corruption.

- What other problems exist in the Russian education system today?

- At present, problem number 1: the State Duma has adopted a new Law on Education. It is approved by the Federation Council and signed by the President. From 1 September, 2013 of the year comes into force. But how to live according to this law, nobody knows. At best, it will remain impracticable. At worst, its execution will lead to the complete and final collapse of the education system in Russia. Because this Law has absorbed all the major flaws of the current education system. Therefore, the educational community faces a long and hard struggle to return to the best traditions of Russian education.

- New Law approved the regulatory per capita principle of financing. This means that the mass closure of small schools, which form the backbone of our education system in the vast territories of Russia, will continue. The law approved the USE as the main form of the final certification of students for the course of secondary school. And this means that the change in the system of teaching in high school will continue, which ultimately will lead to the destruction of the fundamental classical education in the Russian school and transfer the entire system of teaching to applied rails. The Law on Education has absorbed the provisions of the 83 Federal Law, the main purpose of which is to change the status of municipal institutions (autonomous, budgetary, public), which, in turn, will lead to an increase in the level of payment in the education system. In addition, the new Law “On Education” does not give any guarantees to teachers and other teaching staff to preserve and increase the level of wages. And if we talk about the principles of financing the education system of the country as a whole, then the Law does not establish any regulatory boundaries of state spending on this area. Thus, we can conclude that the new Law “On Education” will not reduce, but stimulate further growth of corruption in the education system of our country.

Ctrl Enter
Noticed a mistake Highlight text and press. Ctrl + Enter
We are
Meeting on the development of the military education systemAbout Stalin and Khrushchev
33 comments
Information
Dear reader, to leave comments on the publication, you must to register.