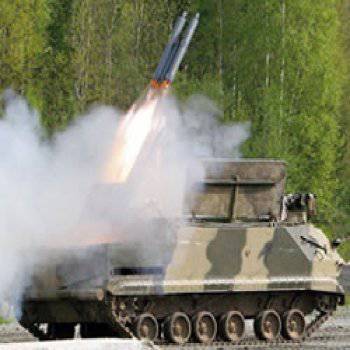 As it became known from sources in the Ministry of Defense, as early as next year, modern equipment designed for remote mine clearance of territories can be sent to the engineering troops.


The new installation UR-07М, developed at the engineering research institute of Balashikha and manufactured at the Rubtsovsk machine-building plant, will replace the installations UR-77, which received the nickname “Zmey Gorynych” among the troops.

Installation for mine clearance is collected on the basis of the BMP-3 chassis and has the ability to penetrate minefields at a distance of one kilometer. A distinctive feature of the new technology is the ability to combat any type of mines.

The tests carried out at the installation confirmed its universal ability to deal with any mines, including seismic ones and a double fuse. The UR-07М is able to punch through a safe corridor in a minefield for several seconds, through which not only infantry, but also military equipment can pass.

How many installations of the UR-07M will go into service, while not precisely defined. The decision will be made after the completion of all documentation and coordination with the relevant authorities of the issue of the inclusion of new equipment in the State Border Order for 2014 year.

At the same time, it became known that the Rubtsovsk Machine-Building Plant is ready for serial production of installations.

UR-07 “Re-sorting” is a Russian remote mine clearance installation. Developed in the design office of the Rubtsovsk machine-building plant.
It is intended for making passages in anti-tank minefields in an explosive manner during combat operations of troops.

MACHINE COMPOSITION:
• Base machine (510 product on the BMP-3 units and aggregates);
• Armament;
• Special starting equipment;
• Optional equipment.
As of the 2009 year, the state defense order provided for the delivery of at least one demining plant UR-07М. The cost of one car was 54052870 rubles 00 kopecks.
The UR-07М mine clearance installation is intended for making passages in minefields. Demining can be done both from the ground and from the water. To make passes in the machine, a launcher with clearance charges UZP-06 or UZP-06 and a brake rope release mechanism was installed. The feed range of the UZP-06 charges is 340 meters, and the UZP-06D charges - 1 km. Weight, respectively, 2,85 t and 1,35 t. In addition, the equipment of the machine includes crane equipment and a lifting mechanism for the launcher. The chassis is equipped with devices for monitoring the terrain, as well as communications, extinguishing fires, heating and air conditioning. To mask the machine on the battlefield, the 902 “Tucha” smoke screen curtain system installed on the hull consists of 6 81-mm grenade launchers for firing smoke grenades.