April 13 2013
29
Early in the morning, in the 4 hours of 30 minutes 13 in June 1942, the ambulance transport “Georgia” entered the South Bay of Sevastopol. When to Minna pier were only a few meters, transportation with clearly visible red crosses on board dived five German U-87. Two bombs hit the target - one in the engine room, the second - in the stern of transport. After 7 minutes there was a terrible explosion, and the 116 meter-long transport was literally torn in half. In 4 hours 55 minutes "Georgia" disappeared under water. Further Soviet historians put the bullet, after condemning another crime of the Nazis, the good, admiralty law prohibits flushing sanitary court. 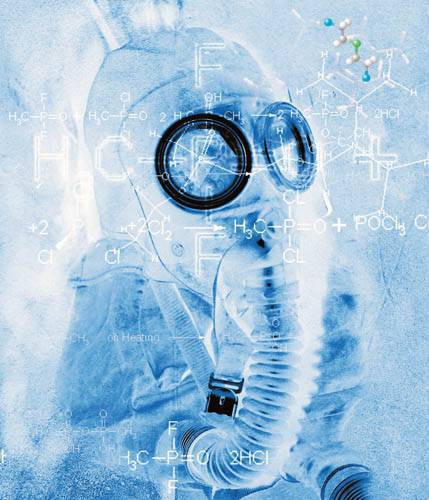 But in 1948-1949 years both parts of "Georgia" were raised in the course of the Sevastopol bays removal of wrecks. Usually raised from the bottom of the sea trial or restored, or sent to the shipbreaking base - in 1949, the country as air was necessary scrap iron. But both parts of "Georgia" for some reason have not sent in Inkerman on butchering and towed in Cossack Bay and flooded there. Moreover, several divers and workers who participated in the ascent of "Georgia" were hospitalized. They appeared on the skin ulcers, characteristic of lesions with mustard gas.

In 1956 – 1959, a new ascent of both parts of “Georgia” was carried out, and this time they were towed and flooded away from the coast and at great depths. What is the deadly secret hiding the holds of sanitary vehicles?

To begin with, in the spring of 1942 the ships of the Black Sea fleet experienced a chronic shortage of anti-aircraft weapons, especially for protection against low-flying aircraft. But the ambulance transport “Georgia” had anti-aircraft weapons better than the Soviet destroyers of that time: five 45-mm cannons, two 12,7-mm DShK machine guns and six American Colt machine guns. The holds of the vehicle were loaded with shells to the eyeballs. But this is not so bad. Worst of all, among the high-explosive shells hundreds of chemical shells were laid out in even rows - caliber from 130 to 76 mm, as well as barrels of poisonous substance (OM), designed to equip aerial bombs. It was this cargo that was reburied twice along with the remains of "Georgia".

A rhetorical question arises: why in July 1942 of the year did you need to carry chemical ammunition to Sevastopol? Indeed, defenders of the city experienced an acute need in the high-explosive shells. Looking ahead, we note that because of the lack of shells and Sevastopol was commissioned. So why was there to carry himsnaryady which obviously can not be applied?

Nevertheless, it was just that - "Georgia" went to her last flight for the purpose of use of chemical weapon! Note that hundreds of tons of chemical ammunition - artillery shells, aerial bombs, various pouring aviation devices and so by the beginning of the war were stored in numerous adits of Sevastopol. 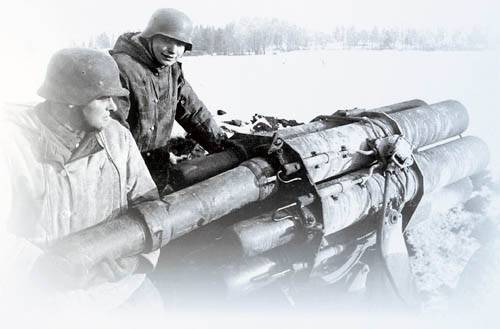 150-mm Germanic six-barreled chemical mortar, nicknamed by our soldiers "Vanyusha". By the spring of 1942, several battalions of such mortars were concentrated near Sevastopol

The first chemical artillery for ship artillery arrived in Sevastopol back in 1916 year. Then the planned landing in the Bosporus, and Admiral Kolchak offered to throw Turkish coastal fortifications and infantry chemical shells. As a result, by February 1917 of the year in Sevastopol accumulated several hundred marine chemical shells of caliber from 102 to 305 mm.

After the war, both in Germany and in the USSR, the development of artillery and aviation weapons for ammunition was carried out in deep secrecy from its own population and Western countries: Germany signed the Geneva Protocol on the Prohibition of the Use of Chemical Weapons in the Summer of 1925, and the Soviet Union in December of 1927 . In 1926 year unfolded full-scale German-Soviet work on chemical weapons. The largest joint research center with a test site was established near the village of Shikhan in 130 km north of Saratov. The object received the secret designation "Tomka".

The same system of classifying chemical weapons was adopted in the Wehrmacht and the Red Army. So, in the artillery himsnaryady all should have the same weight and ballistics with high-explosive and smoke shells. Therefore, in the shooting tables and other documents that were available in parts in peacetime, chemical shells did not appear anywhere. All Germanic chemical shells were painted in a dark protective color. On the projectiles with different chemical agents, colored annular bands were applied, as well as markings indicating the distinctive properties of the chemical agents, equipment, and a sample of the projectile. And guess what the inscription on the projectile means - FHGr Gelbring (howitzer grenade with a yellow ring) or FHGr Gruenring (howitzer grenade with a green ring). 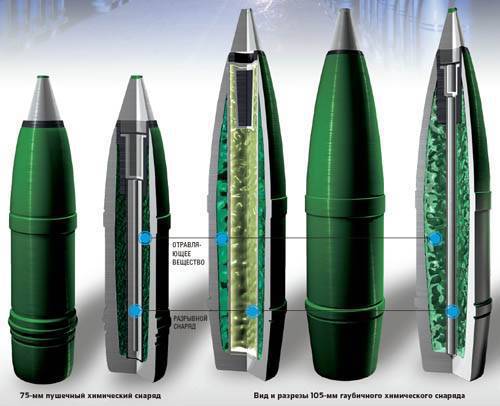 Chemical bombs to German 100-mm light field howitzer arr. 16 18 and apparatus are similar to 75-mm projectiles. These shells are used in two versions, differing in the diameter of the ignition shells under a bursting charge

Interestingly, in the 1934 – 1936 years, the Ostechbureau and the Red Army ANII conducted “special secrecy work” on the theme of “Lafet”. So the shrapnel with poisonous elements was encrypted. In December 1934, the 76-mm poisonous shrapnel was tested with three shots. A crystalline poisonous substance was pressed into small 2-gram and 4-gram bullets. According to the commission, the shooting was successful.

It is curious that the appearance of rocket artillery in both the Wehrmacht and the Red Army was due to chemical projectiles. The fact is that the famous “Katyusha” was originally created for chemical munitions, and incendiary and high-explosive fragmentation shells were considered secondary. The first in the 1938 was the chemical practical shell PCX-132, and only then the high-explosive fragmentation missile M-13, which later received the RP-941 index.

At the end of the 30-s, the German engineer Nebel had designed the 15-cm missile and a six-barrel tubular installation, which the Germans called the six-barrel mortar. Mortar tests were initiated in the 1937 year. The system received the name «15-see smoke mortar type 'D'." In 1941, it was renamed 15 cm Nb.W 41 (Nebelwerfer), that is, 15-cm smoke mortar arr. 41. Naturally, the main purpose of the “smoke mortars” was not to install smoke screens, but to fire missiles filled with poisonous substances. Interestingly, the Soviet soldiers called 15 cm Nb.W 41 "Vanyushi", by analogy with the M-13, called "Katyusha". 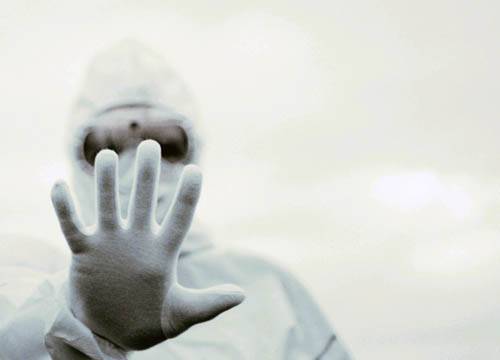 It should be noted that chemical weapons are effective only with their massive use. A typical example: at the beginning of the 1990-s, our historians discovered in the archives orders for the use of chemical equipment in the 1921 year against participants in the Antonovo uprising in Tambov. However, data on the losses of insurgents from chemical weapons was not found. Moreover, population surveys, conducted long before the restructuring, showed that the population in the year 1921 knew nothing about the application of the Communists agents. At the beginning of 80, I myself talked with an old woman, who boldly talked about battles with Antonovs, but had never heard of chemical shells. In fact, it was applied a few dozen 76-mm himsnaryadov that gave zero effect because of ignorance of our kraskomov.

But in the Crimea, our command was preparing for the mass use of chemical weapons. I note that the first to use OM 11-Army General Manstein in April-May 1942 years on the Kerch Peninsula. Colonel-General F. Halder, in his diary of 13 June 1942, wrote: “General Oxner: Report on the participation of chemical troops in the battles for Kerch”.

Thus, the Soviet side quite objectively had the right to declare retaliatory measures. The massive use of chemical weapons near Sevastopol could lead to the complete defeat of Manstein’s army. Note that the Germans at Sevastopol had a huge advantage in battle Hinged (howitzers and mortars). And the defenders of the city had a significant superiority in long-range cannons (even without taking into account ship artillery). However, the mountainous terrain made guns with excellent ballistics impotent against German mortars hidden in the folds of the terrain. But chemical shells would easily have smoked the Germans out of their shelters. By the way, photos, newsreels and numerous memoirs show that our fighters did not part with gas masks until the last day of defense. But half-naked German soldiers near Sevastopol have no gas masks visible. Therefore, it is easy to assume the effect of the massive use of agents. However, the death of "Georgia" and attack the Germans out of Kharkov to Stalingrad forced the Soviet command to renounce the use of OM in the Crimea.

Before the city was handed over during the 27 – 29 period of June 1942, chemical munitions were delivered at night from the Yukharina Beam storage facilities to Kazachya Bay, where they were loaded onto the Papaninets schooner, where they were then taken to the open sea near the bay, where they were dumped overboard. The discharge depth was not less than 50 m. At the same time, the mustard and lewisite, which the chemical bombs were refueled, were stored at that time in barrels of type L-100. Periodically, such barrels are found on the coast of Crimea today. "In the 80-e near the Cossack bay divers found the barrel type A-100 and drew to shore. An oily liquid smelling geranium was found in it. Laboratory analysis showed that in the barrel of domestic production is lewisite, a chemical agent. ” I would not wish such a find to anyone!