SMERSH and SMERCH In the war, they successfully caught spies, and who will now catch corrupt officials? 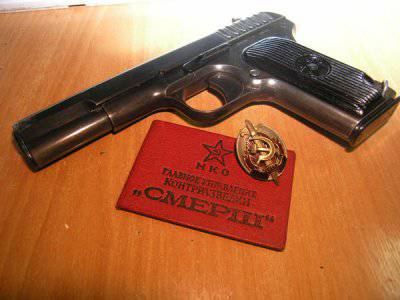 From 19 April to 10 in August, the Central Museum of the Armed Forces of the Russian Federation hosts the anniversary exhibition dedicated to the 70 anniversary of Smersh’s military counterintelligence - “Death to Spies”. It is open from 10 to 17 hours and is open every day except Monday and Tuesday. Ticket price - all 40 rubles.


On the eve of Victory Day, the “AN” columnist visited the main military museum of the country, which is located in Moscow, on the street of the Soviet Army, the home of 2. At the "antispyware" exhibition, we managed to meet interesting people.

In a small room full of people. And mostly people are very young. Unfortunately, veterans can be counted on the fingers. Today, in all of Russia, there are only a little more 100 Mortalians. All of them are over ninety.

Smersh did not last long, about three years: from 1943 to 1946 a year. However, the experience gained by Soviet counterintelligence officers during the war years is studied and applied by the special services of the whole world. After all, this organization in fascist Germany was feared by both the Gestapo and the military intelligence Abwehr.

In the role of the tour guide for the exhibition for the browser "AN" made a former employee of military counterintelligence, and now a historian of the special services Pavel Stepanovich Smirnov. He led to the stands and showed unique documents from the Central Archive of the FSB, photographs, samples of uniforms of the security officers of the war years, awards, banners and weapon. I noticed that Smervian pistols were of particular interest to the boys.

“Look, one of these was shot in Macedonian by the hero of Bogomolov’s novel“ In August, forty-four, ”said one guy to another in a rapturous whisper.
- Is it from two hands and swinging a pendulum? - He clarified. - So even no James Bond could.

From a boyish discussion, I was distracted by my voluntary guide. Pavel Stepanovich at the booth with a secret government decree on the formation of Smersh said that Stalin himself gave the name of this organization. When he was offered to call military counterintelligence "Death to German Spies", he noticed that there are not only German spies. And then in the secret document she was simply called “Death to the Spies!” - Smersh.

Not only the name of this organization terrified enemies.

Only in the first 10 months from the beginning of its creation, German intelligence agencies and schools were introduced 75 agents. Of them 38, i.e. half, returned, having successfully completed their tasks. They provided information on 359 employees of the german military intelligence and on 978 spies and saboteurs, prepared for transfer to our rear. Eventually 176 enemy scouts were arrested, 85 came to confess as well five German intelligence officers recruited to work in their units on Smersh’s orders. Under the influence of our agents, the ranks of the Vlasov "Russian Liberation Army" left 1202 person And just Smersh exposed and captured more 50 Thousands of Spies on the territory of the Soviet Union and beyond - from ordinary saboteurs to agents sent to kill Stalin. One of the expositions is dedicated to just such a suicide bomber.

Smirnov shows me documents addressed to the Soviet officer P.I. Tavrina. Under the saboteur, there was also a Star of Hero and the Order of Lenin. They now also lie under the glass case.

How during the war years did they catch spies and saboteurs? This recalls the former Leonid Ivanov, Head of the Smersh Department of the 5 Shock Army:

- Some five paratroopers landed under Tiraspol. One peasant told us that two soldiers approached him and gave him a cigarette. A private only give a shag. Then they took one - a fighter as a fighter. But the notebook in the duffel bag was fastened with nickel-plated clips, while ours had only iron, rusted ...

On such little things, even experienced agents would burn. During the war years, only the Abwehr prepared them. 30-40 thousand. And how many more informers and agents, how many policemen and other accomplices of the regime in the occupied territory!

In 1942, under the direction of Schellenberg and Skorzeny was started operation "Zeppelin" and created the body of the same name. His task included intelligence, sabotage, the organization of sabotage, terror in the USSR, the weakening of the economy and the collapse of the unity of the Soviet people. For this purpose, the Nazis massively recruited traitors, established contacts with nationalists and separatists of all stripes, sent sabotage and reconnaissance groups to the USSR, formed an intelligence network and conducted analytical work.

But Smersh outplayed the Zeppelin in all directions. In particular, we have repeatedly arranged radio games, in which the Germans were deceived, the reconnaissance groups were captured, false data were reported, and so on.

These games were held not in the silence of the Lubyanka cabinets, but on the front line or behind the front line in general, behind enemy lines. Therefore, the age of the Srivsian in the war was short: on average just three months. Then either injury or death.

Total for the war years only four employee Smersh was awarded the highest award - the title of Hero of the Soviet Union. AND all - posthumously.

Smersh was the most effective intelligence service during World War II. From 1943 until the end of the war, radio games alone were held 186. In the course of them, we managed to withdraw more than 400 personnel officers and nazi agents, capture tens of tons cargoes.

Behind the glass you can see the jacket and the search for the main war criminal Adolf Hitler. For many years they were kept in the vaults of the Lubyanka. And now exposed to the public.

For the first time, material and irrefutable evidence of the death of Adolf Hitler, Martin Bormann and other leaders of the Third Reich is presented. As you know, the legends about their supposedly miraculous salvation continue to live to this day. A crushing blow has now been dealt to them.

Pavel Stepanovich shows a fragment of Hitler’s skull with a bullet hole, a part of the sofa covered with his blood, as well as excerpts from the Smersh military counterintelligence case on the ringleaders of fascist Germany, the results of forensic examinations.

However, the most sensational proof of the death of the main villain of the 20th century was Hitler’s jaw. It is for the teeth reliably identified personality. Adolf Schicklgruber. Previously, this find was kept in secret. Hitler's jaw never left the secret safes of the Lubyanka. Fanatical fans of the Fuhrer are ready to give a lot of money for it. So, one of the German collectors offered for Hitler's jaw three millions. And not rubles ...

For historians, the interrogation records of the servants of the leaders of the Third Reich are of great interest. Thus, Hitler’s personal valet asserted that the Fuhrer was most afraid of being taken prisoner in the spring of the forty-fifth. He feared that Stalin put him in a cage and as Yemelyan Pugachev, will carry on barbaric Russia.

Adolf was also frightened by the Abwehr’s reports that representatives of Smersh were included in each assault group of Soviet troops operating in the center of Berlin. These Chekist teams had one task - to capture the Nazi leaders.

But Hitler’s greatest fear was chemical weapons. As is known, both Germany and the Soviet Union possessed a large supply of toxic gases. But even in the most critical days of the war, none of the opposing sides decided to use them out of fear of retaliation. Smirnov shows me reports from the Gestapo. Müller assured Hitler that Smersh was preparing an assassination attempt on him Smolensk. They say that local partisans and underground fighters had to put poisonous substances into the air intake system of the Krasnobor bunker of the Fuhrer's advanced rate. "Wolf's Lair". And only vigilant Gestapo allegedly prevented this attempt. Since then, all the bunkers of top management in Germany have been equipped with special gas analysis laboratories. One of these devices, which was previously kept in a secret safe of the KGB-FSB, can now be viewed at the exhibition.

History Smersh ended in May 1946. Then, by a resolution of the Politburo of the Central Committee of the CPSU (b), Smersh joined the USSR Ministry of State Security as an independent head office. It is noteworthy that in the three years of Smersh’s existence in the ranks of counterintelligence there were no not a single case of betrayal, the transition to the side of the enemy. Could not enter into their ranks and no enemy agent.

... Leaving the exhibition, I heard a conversation between two strong men.

- I read in the "Arguments of the Week" article "Russian gay - a find for a spy"?

- Is it about homosexuals in power? Remember the anecdote: “The blue spruces in the Kremlin. And they drank?

“You’ll have hi-hee yes haha.” And there is a serious problem raised: who controls us, what is the quality of our elite. In the same newspaper they write that Deputy Medvedev Igor Shuvalov and his wife seize a million two hundred thousand rubles every day. Their income is forty times greater than that of Putin himself.

- And how many such shuvalovs, dvorkovich, maneuver at the top?

- Read another interesting article, called "Why Putin surrounds himself with villains." - And a man with military bearing gave his interlocutor "Arguments of the week." - In a war against corruption, it is time to revive Smersh. Only in the name you need to change just one letter: “sh” to “h”. And it will turn Smerch - "Death to officials, embezzlers."

Ctrl Enter
Noticed oshЫbku Highlight text and press. Ctrl + Enter
We are
What you didn't want to know about EnglandList of destroyed the largest and most high-tech enterprises
Military Reviewin Yandex News
Military Reviewin Google News
109 comments
Information
Dear reader, to leave comments on the publication, you must to register.