22 May 2013
19
In the previous article it was possible to get acquainted with the Bulgarian pistol P-M01, which was, in fact, a cosmetic modernization of the Makarov pistol. This gun remained relevant for a long time, but the consumer, including the army and the police, demanded weapons under a more powerful ammunition, and the company Arsenal hastened to meet these requirements. With the beginning of the new century, the company began work on a new model of weapons, which was supposed to meet the needs of both the civilian market and become used by the army and police, and this gun was eventually developed. Let's try to meet him. 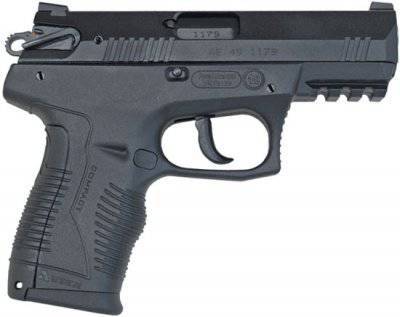 It was decided to make a new pistol under one of the main ammunition, which, although it is becoming obsolete, is slowly becoming less relevant, namely, 9x19. The designers decided to create a weapon that stood out against the general background, while it would be quite reliable and efficient, combined compactness, high working life and would be cheap to manufacture. It was possible to realize, unfortunately, far from all of our plans, although the result was quite nice, although I had some problems.

The appearance of the gun corresponds to all the latest modern trends of weapon fashion: a combination of plastic and metal, a seat for additional devices and so on and so forth. On the right and left sides, a fuse switch is located on the casing-shutter, which protrudes beyond the casing-shutter at the back, which allows you to remove and put the weapon on the fuse, without taking it away from the aiming line, although this slightly disturbs the trigger of the gun, but in any case This is all implemented reasonably and conveniently. On the plastic frame under the barrel there is a seat for a compact flashlight or laser designator. The slide delay control is located on the left side, it also serves as a lock for the housing cover, which does not allow the weapon to self-disassemble. The pistol grip has removable rear pads that allow you to adapt the weapon to the hand of the shooter of various sizes. Standard sights are mounted on the dovetail seats on the gate, which allows replacing them with more comfortable ones for the shooter, including with a fully adjustable one. 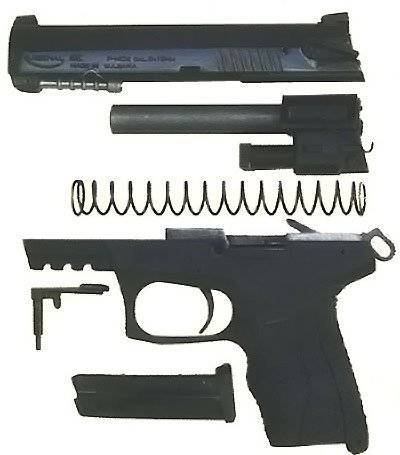 But much more interesting is the weapon automation system, which is built on the principle of gas braking of the bolt. Under the barrel of the weapon a gas piston is placed, into which, when fired, gunpowder gases get through the hole in the barrel bore and prevent the shutter-casing from moving backwards. After the bullet leaves the barrel, the powder gases reduce their pressure and the shutter-casing can easily start moving by throwing out the cartridge case and cocking the trigger while moving backwards and inserting the cartridge into the chamber when moving forward. The idea of ​​such an automation system is not new, there are other types of weapons that work on the same principle, but all of them have one common drawback - high demands on the powder charge. "Dirty" and poor-quality powder immediately makes itself felt in such weapons, adversely affecting the reliability and durability of the sample. So it’s not known what a gun you can’t charge, it feeds on exceptionally high-quality ammunition.

The weapon has a barrel with a polygonal cut length of 103,6 millimeters. The total length of the weapon is 180 millimeters. The weight of the P-M02 pistol is 760 grams, the capacity of the 15 magazine ammunition. Due to the fact that the weapon is very capricious for ammunition, the claimed resource of the 6000 pistol shots itself, the barrel of the weapon is able to withstand 10000 shots. I think that it is not necessary to say what information is present in the advertising of weapons, and what is not. 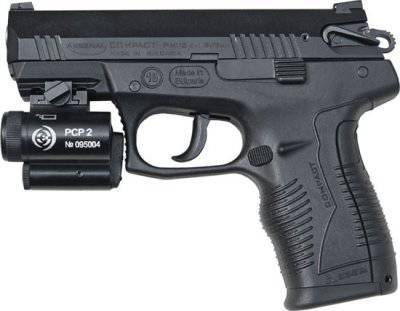 In general, the sample, in my opinion, turned out to be very interesting, but far from widespread, if only because of the fact that there are no quality cartridges everywhere. Dimensions and weight of the weapon allow you to wear it hidden without any inconvenience, even when it comes to daily wear. The accuracy of the weapon is quite high and with good preparation of the shooter can confidently use the weapon at distances up to 100 meters, although the effective range specified by the manufacturer is equal to 50 meters, but here is the question of the growth of the hands of each individual shooter.