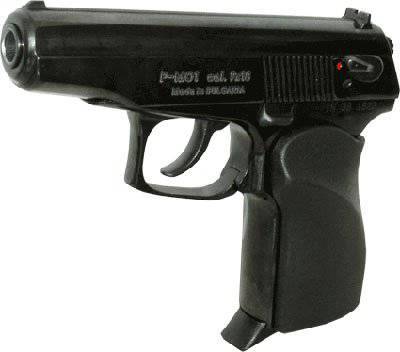 As stated in the old ad, “Russia is a generous soul,” and the Soviet Union was even more generous, giving many people virtually the opportunity to use their products. This is most clearly seen in the example of the Kalashnikov assault rifle, but this is by no means the only example. Repeatedly met statements about Makarov pistol, that from this weapons you can only shoot, try to refute this statement, at the same time having become acquainted with a sample that is made in the image and likeness of the PM, but is made in Bulgaria. Well, the fact that a weapon is made not only in the country where it was developed, proves its relevance. Of course, the PM is not a universal pistol absolutely for all tasks, but with many it can cope with great success, as well as its quite interesting version of the Bulgarian production.


In 1990, the Arsenal weapons company began creating its own Makarov pistol, which was supposed to be more ergonomic and easy to use, in other words, it was decided to upgrade the weapon. The design of the gun itself, naturally did not touch, but took up the appearance and ergonomics. Immediately, more convenient covers on the handle, a protrusion in the lower part of the store, a safety bracket, and so on, but in order, are striking. The weapon was primarily created as a model for the civilian market, that is, as a weapon of self-defense, for entertaining shooting, and so on. It was also planned to make a service sample, but, naturally, there was no calculation that the pistol would fall into the military environment. 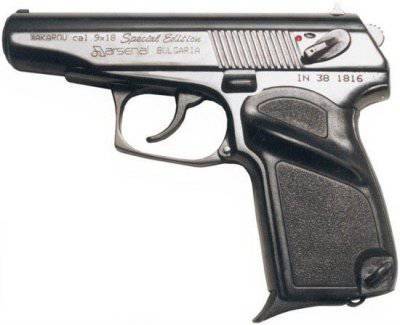 The ammunition, which uses a gun, left the same 9x18PM, a model for the cartridge 9x17 was developed separately. For a more comfortable holding of arms, the handle pads were replaced, which really had a positive effect on the holdability and reliability of the grip of the weapon. For more convenient firing from two hands, the shape of the safety bracket was changed, which became rectangular with a slight bend in the front. The changes also affected the cover-shutter, which also differs from the original weapon. First of all, the rear part of the cover-shutter became straight, the notch also changed, becoming longer. The front of the housing has become smoother. The sights of the weapon were decided to be supplemented with white dots for ease of aiming, and the paint is not light accumulative. The store latch was left in its usual place - at the bottom of the pistol grip. The weapon shop was also not changed and remained with the 8 ammo capacity. Decorating weapons can be very diverse from chrome to bluing with different shades, still an option for the civilian market in general.

Automatic weapons built on the scheme with a free gate, that is completely similar to the Makarov pistol. Trigger mechanism double action. The fuse blocks the drummer, removes the trigger from the platoon, locks the sear and the bolt of the weapon. In general, we can say that the P-M01 pistol is the same PM after a good tuning. 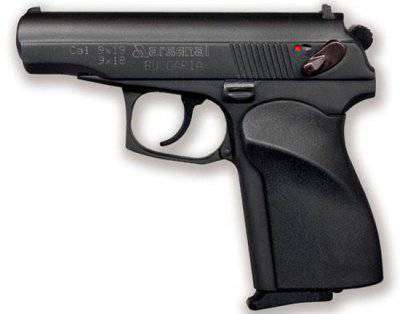 Much more interesting is the version of the weapon chambered for and 9х18PM and under 9х19. How to shove designers nevpihuemoe, I personally do not know. And the point here is not only that the automatism with a free gate is not suitable for the relatively powerful cartridge 9x19, but also that the real calibers of bullets of cartridges differ from each other on a millimeter 0,24, and the liner edges have a different diameter. Here either all this disgrace hangs like a pestle in a mortar and has a very low resource and reliability, or it requires the replacement of the barrel of the weapon and the return spring, which has not been confirmed. Nevertheless, there is such a sample of weapons, they even say that it works, so if someone has information on such a universal, then please share.

The Р-М01 pistol used in its time to be in rather high demand, which gradually went away, as other weapon models appeared under the market for more powerful cartridges, although it’s not clear to me personally what the 9х18 with the expansive bullet of active self-defense advocates does not like. In my opinion, this ammunition is more than enough, because the attacker rarely wears a bulletproof vest. Nevertheless, the consumer gave preference to more complex and powerful samples, Arsenal did not lag behind and created a weapon model already under the name Р-МХNUMX with a rather rare and interesting automation system, but this gun is already in the next article.