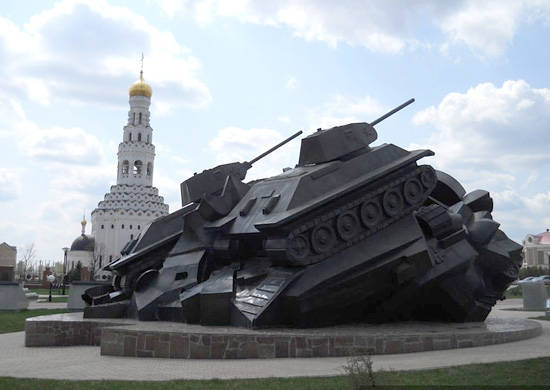 In July, the command of the Airborne Forces (Airborne Forces) plans to conduct a battalion tactical exercise with an airborne landing near the village of Prokhorovka, Belgorod Region, dedicated to the 70 anniversary of the Battle of Kursk.


The idea of ​​conducting an exercise on the site of a legendary tank battle is connected with the active participation of airborne formations of the Great Patriotic War in the Battle of Kursk.

Marines will carry out their maneuvers with elements historical reconstruction of the battle and thus pay tribute to the heroes of World War II, who fell in the battles for their homeland.

Another memorable date of World War II - the 70 anniversary of the 18 feat of the Siberian soldiers of the 139 Infantry Division at the Nameless Altitude (224,1 mark) near the village of Betlits, Kuybyshevsky District, Kaluga Region, will be dedicated to dropping an airborne unit on controlled parachutes of the Arbalet type. Here, memorable events will take place in September.

“The contribution of the paratroopers to the Great Victory deserves the highest historical assessment,” says Colonel-General Vladimir Shamanov, commander of the airborne forces. - To draw attention to their role in key events of the Great Patriotic War, we are obliged by numerous facts of exceptional stamina, unparalleled courage and mass heroism of paratroopers in all battles and battles without exception. This is our duty to the older generation, a tribute to the feat of soldiers and officers who defended their homeland in the worst years of the most brutal and bloody war in the history of mankind. ”

It is known that in the spring of 1943, 7 airborne divisions were deployed to the Kursk Arc, which became part of the Steppe Front. The 13-th (3-th airborne corps) and 36-I (9-th airborne corps) Guards divisions that took part in the Battle of Stalingrad also participated in the battles.

In the Prokhorovka area, soldiers of the 9th Guards Airborne Division distinguished themselves. On July 11, 1943, the compound took up defense directly in the village, where the paratroopers fought bravely for 26 hours, blocking the enemy’s path to Kursk. To the battalion of paratroopers of the 100th Guards Parachute Regiment were thrown up to XNUMX tanks and to the enemy motorized infantry regiment. Once in the center of bloody battles, the guards showed unshakable stamina, showed mass heroism, which allowed to stop the advance of the enemy, to forge his strength.

After suffering significant losses, the Nazis were forced to retreat under the onslaught of the paratroopers. In the fierce battles of 12 and 13 July, the 9 Guards Airborne and 6 Guards Rifle Divisions courageously fought alongside the soldiers of the 13 th Guards Airborne Division.

July 15 The 1943 of the year launched a counteroffensive by the troops of the right wing of the Central and then of the Bryansk fronts. Already by 5 in August they liberated the city of Oryol from the Nazi invaders, and the troops of the Steppe Front - Belgorod. 23 August was released Kharkov. The victory on the Kursk salient opened the way for the Red Army to the left-bank Ukraine.

The feat of 18 of the Siberian warriors became widely known thanks to the song “At a nameless height” by V. Basner and M. Matusovsky. They accomplished their feat on the night from 13 to 14 September 1943, when, during the Smolensk offensive operation, Soviet troops seized a well-fortified height occupied by the Nazis and during the night they held the position under the onslaught of the enemy forces that were superior to 300. Of the 18 fighters under the command of Junior Lieutenant E. Poroshina, only two survived - Konstantin Vlasov and Gerasim Lapin.

A monument was erected at the battle site of September 15 of the year 1966, and May 9 of the year was unnamed Memorial of the Nameless Height.