21 May 2013
6
In a previous article, PMG’s French Ultima Ratio sniper rifle was talked about. armory a company from a small company has become a worthy competitor to the titans of the world arms market. Having faithfully directed the money received from the state order for this rifle, the company managed to expand its production and take on another project, which was intended, in the first place, to satisfy the needs of the army and the police. This is a large-caliber sniper rifle Hecate II, which was made on the basis of the same Ultima Ratio, so we can say that this is another version of the “Last argument”, only this time the argument is much more weighty. 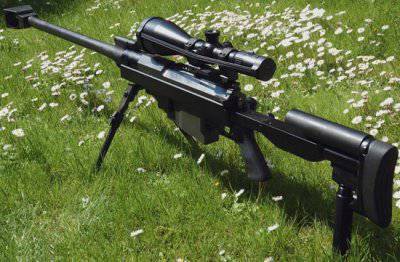 Since the proliferation of large-caliber sniper rifles, the armies of many countries have experienced the lack of such weapons. Someone decided to tackle the modernization of their outdated anti-tank guns, increasing their accuracy. Someone decided to purchase similar weapons in other countries or to acquire a production license. And someone created a new model with the use of all modern developments in firearms. And one cannot say that one solution was bad, and the other was ideal. For example, the production of your own weapons always seems to be a plus, however, in the case of large-caliber rifles, which are not so much needed for the army and especially the police, it is much cheaper for a small country to buy such weapons from a foreign company than to spend money on its own development and production. However, it all depends on how well a weapon case is developed in a particular country and how great is the need for such a weapon. France is not a small country at all, moreover, this country has not the last vote on our planet, because buying weapons abroad is not a solid thing, perhaps. Taking into account the fruitful work of PGM to create a rifle chambered for 7,62х51, it was this company that was tasked with developing a large-caliber rifle.

The task was quite simple, since the weapon itself is not complicated and simple, and the main characteristics are mainly formed by the quality of production. Since the “bolt” chambered for 7,62х51 already existed and met all the requirements placed on it, it was decided to make a large-caliber sniper rifle chambered for .50BMG based on this weapon. In other words, the weapon simply increased some of the nodes, leaving the main essence unchanged. True, I had to tinker with the muzzle brake-recoil compensator, in order to reduce the impact when shooting with minimal negative effects on the accuracy of the weapon. 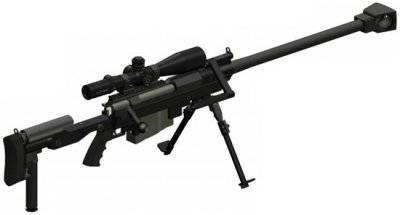 Thus, the Hecate II large-caliber sniper rifle is a model of a weapon, built around a slider that locks the barrel when turning on the 3 stop. Taking into account the fact that the ammunition of the weapon was changed, the wide use of light alloys had to be abandoned, which increased the weight of the rifle to 13,8 a kilogram, and the heavy barrel of the weapon also has a considerable significance. The barrel mount also had to be changed, abandoning the 4 bolts passing through the receiver and entering the cut-outs under the cartridge chamber. In front of the receiver there was a protrusion on which a handle was fixed to carry the weapon. They swear strongly at this handle, since it is far from being centered on the weight of the weapon, and it is virtually impossible to carry a weapon by this handle if an optical sight is installed, because in its raised position between the optics and the handle there is space for two fingers, It is not at all convenient to carry almost 14 kilograms of weight, and the risk of damaging the telescopic sight is high. In addition, not every high-resolution telescopic sight allows you to lift the carrying handle at all, although with the standard SCROME LTE J10 F1 10 optical telescope, the handle fully rises, only to tackle it. Open sights rifle does not have, which is a pity. 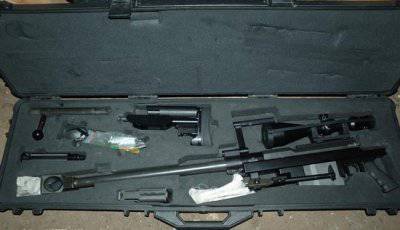 For long distances the rifle is transported in a hard case in a disassembled form. The butt of the weapon for transportation is disconnected, the bolt goes, the bipod is folded, the telescopic sight remains in place, which is a plus. The butt itself has the ability to adjust its length and height of the cheek support. On the back of the butt there is a backsheet made of porous rubber, which softens recoil when firing, in addition to him, for the same task, a fairly large muzzle brake-recoil compensator is installed. It feeds weapons from detachable stores with a capacity of 7 cartridges. The length of the weapon is 1380 millimeters with a butt, but the barrel has a length of 700 millimeters. Back, the manufacturer "modestly" and indicated the effective range of use of weapons in 1500 meters, when similar in design and quality samples can boast larger numbers. In reality, the weapon is nothing worse than most CWS and with high-quality ammunition can show amazing results.

This large-caliber sniper rifle has proven itself on the battlefield. After being adopted by the French army, it gained its place in the armies of Estonia, Indonesia, Slovenia and even Switzerland, which has its own excellent CWS models, which indicates the high quality of the weapon and its effectiveness. The disadvantages of this weapon would first of all be the lack of open sights, since the failure of the telescopic sight would make further use of the weapon impossible. This can also be attributed, and the handle for carrying, however, according to some sources it still changed, but there is no confirmation of this. A large rifle weight is more likely even a plus in this case, and not a minus, since a large mass of weapons significantly reduces the sharpness of recoil when firing, and therefore increases the accuracy and comfort of shooting. Doubt is also caused by fastening the butt to the weapon, it is very fragile in appearance, but judging by the fact that there are no negative reviews about this site, it means that it fully withstands all the stresses that arise in the process of shooting.

Summarizing all the above, it should be noted that PGM company has seriously grown only on these two rifle samples, which allowed to move on with a knowingly positive result and create a new weapon, but about it in the next article.