17 May 2013
127
14 May 2013, the drone X-47B for the first time in stories took off from the deck of the US Navy aircraft carrier "George Bush", which was located in the Atlantic off the east coast of the country in the region of Virginia. The X-47B took off at 15: 18 GMT. The drone was launched from the deck of an aircraft carrier with a catapult, which is designed to launch deck aircraft. In flight, the drone was operated by an operator aboard the ship. In this part of the flight was conducted offline without the participation of the operator. During the test flight, X-47B made several test approaches, and also demonstrated its interaction with the equipment installed on the aircraft carrier, after which he flew over the Chesapeake Bay and sat down at the military airbase Patricknt River, located in Maryland.


During the final stage of the 65-minute flight, the UAV control was successfully transferred to the ground operator. A drone taking off from the deck of the “George Bush” aircraft carrier is one of 2's X-47B units built by Northrop Grumman and intended to demonstrate autonomous operations, including taking off and landing on an aircraft carrier, as well as combat operations at a distance of 50 nautical miles (92,6 km). The goal of this project is to practice new technologies that are necessary to create autonomous combat unmanned deck aircraft. After a series of test takeoffs X-47B, which will last several weeks, it is planned to carry out the first landing of the device on the aircraft carrier.

Work on the creation of the deck UAV for the needs of the US Navy began in the middle of the 2000-s. 2 of the company, Boeing, which in 2002 introduced its drone X-45 and also Northrop Grumman, which introduced X-47A Pegasus, were engaged in the creation of the device. Subsequently, the command of the US Navy signed a contract with Northrop Grumman for the creation of a device - a technology demonstrator, which was named X-47B. Using this project, the US military wanted to assess the capabilities of a machine that would operate from one deck with manned aircraft, and also determine the need for vehicles of this class. 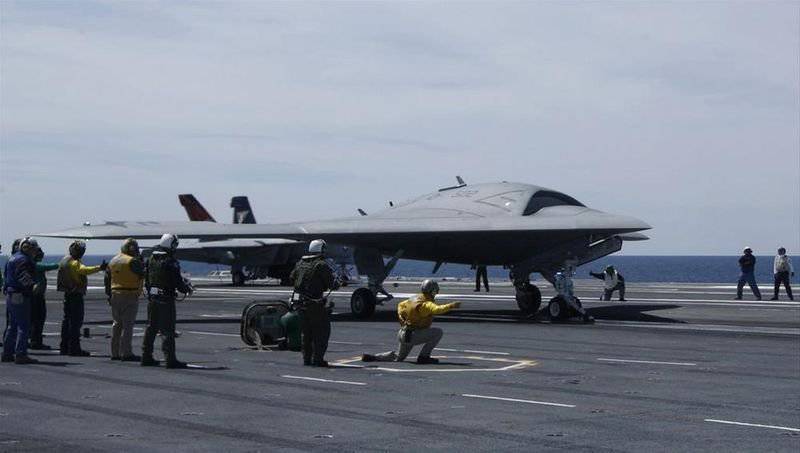 In the course of this project, the US Navy plans to form requirements for carrier-based drone drones, the first of which is expected to be adopted by the American army in 2018 year. At the same time, a formal tender for the creation of X-47B was announced back in March 2010. According to the requirements that were made public by the US Navy, shock deck UAVs must be able to be in the air for at least 11-14 hours and carry a payload in the form of various weapons, sensors and sensors or fuel to refuel other aircraft in the air. The military also wanted drones to use a variety of stealth technology. At the same time, there were no special requirements for the layout of the devices.

First of all, promising UAVs are planned to be used for reconnaissance, observation and reconnaissance, as well as for conducting high-precision strikes against various ground targets. At the same time, the capabilities of drones should be expanded through the implementation of a modular design. If necessary, the UAV can be easily supplemented with various signal relay systems, electronic countermeasures or specialized reconnaissance equipment. In March 2013, the US Navy announced that the new drones should use existing technologies for launching, landing, controlling and exchanging information. The military are going to announce the winner of the competition to create a promising UAV before 2016.

According to representatives of the US Navy, the drone X-47В has a range of more than 4 thousand. Km. at an altitude of more than 1200 meters. In this case, the flight can be fully autonomous under the control of the on-board computer equipment, the operator can interfere with the flight of the device only if necessary. This X-47V compares favorably with other UAVs, which are already used by the US military. The X-47B drone has a folding wing and 2-me internal bomb compartments, which can be placed various weapons weighing up to 2-x tons. The UAV can accelerate to 1035 km / h. Currently, the drone is not installed any additional combat systems. 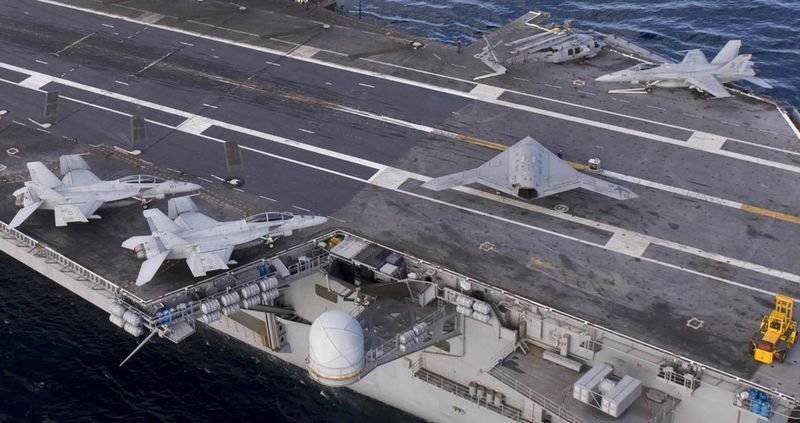 Currently, the cost of the US Navy for the X-47B project is already about 1,4 billion dollars. His first flight demonstrator shock deck drone made 4 February 2011 of the year. In 2012, the Pentagon issued a directive according to which weaponwhich is able to independently select and hit a target automatically (without human intervention) should not be applied by the USA for at least a number of the next few years. Despite this, the American press and human rights activists express their fears that too rapid development of UAVs can lead to just this.

Over the next few months, X-47B will have to take part in a series of tests. In particular, the military are going to check the takeoff of the drone from the deck of a moving aircraft carrier. After this, the drone will have to make a series of landings with the use of aerofinisers at the military base of Patuxent River. A total of at least a dozen landings are planned to be carried out on land using an aero-finisher. After that, the device will move to the key stage of testing - landing on the deck of the ship at rest and in motion, with a nervous and calm sea. It is reported that in the future the range of weather conditions under which flights will be performed from the deck of an aircraft carrier will be expanded.

In general, the test program for the new UAV is nearing completion. According to the developers, it will end completely before the end of 2013. Next year, the U.S. Navy will analyze all the information received during the implementation of this project, and on its basis will draw up a final list of requirements for promising strike deck drones. In total, starting in 2007, Northrop Grumman assembled a total of 2 aircraft prototypes of the X-47B drone. The US military does not intend to pay for the construction of additional X-47B vehicles. After completing a series of tests, the constructed samples will be transferred to aviation museums. 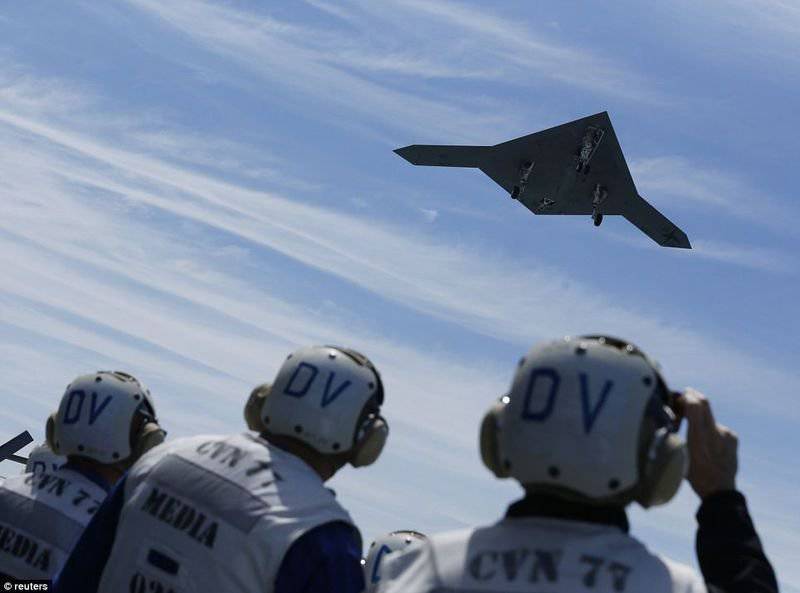 In 2014, the US military plans to conclude a contract for the creation of a deck-mounted drone with all 4 tender participants, but an agreement on the manufacture and supply of UAVs will be signed with only one of the four. So the company Northrop Grumman is going to offer the Navy military drone, built on the basis of X-47B, Lockheed Martin - Sea Ghost, Boeing drone based on Phantom Ray, and General Atomics - Sea Avenger (a continuation of the Predator and Reaper family). At the same time, of all the named devices, only X-47B and Phantom Ray took part in the actual flight tests.

Over the next 30 years, the US Department of Defense expects to increase the number of UAVs in service with the country immediately 4 times - to 26 000 units. At the same time, the military plan to achieve these figures not only by manufacturing the drones themselves, but also by reworking already built aircraft into drones (for example, the A-10 Thunderbolt II attack planes can lose the pilot), as well as by creating optional manned combat aircraft . Each year, the number of new technologies and the tasks they solve increases, so it may well be that in the distant future, deck UAVs will take off already from the deck of crewless ships.

Vadim Kozyulin, director of the program of the Center for Political Studies of Russia on Conventional Weapons, in an interview with the publication Vzglyad noted that drones are the aircraft of the future. According to him, in Russia this case was missed a little. The solution by the Americans of a technical task to take off a UAV from the deck of an aircraft carrier is a signal that a person is becoming less and less popular for waging war. The possibility of launching autonomous drones from the deck of aircraft carriers is a new milestone in the development of weapons. 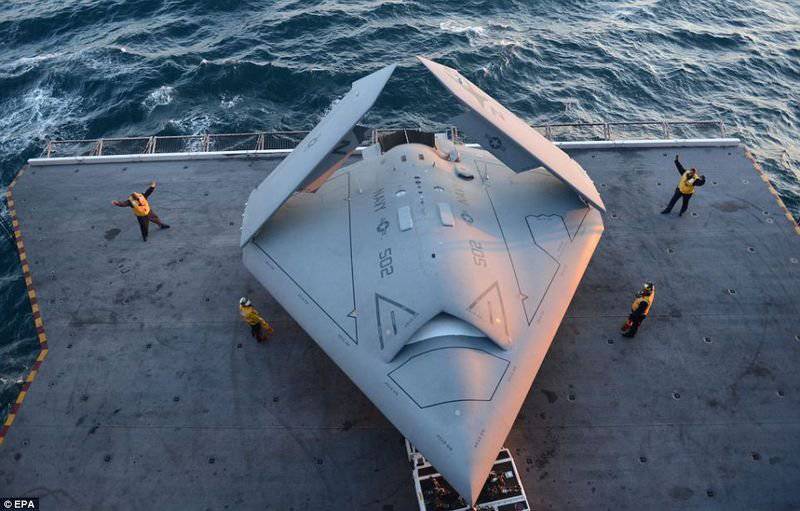 Considering the fact that technologies are continuously improving, and some of them allow airplanes to be in the sky for a long time due to the use of solar energy, there are practically no unattainable territories. Today, the fleet can deliver UAVs anywhere in the world, in the long run, such devices can be in the air indefinitely, and given the fact that this is a drone drone, it can hit targets, transmit information, remaining unobtrusive, since today there are not so many effective means of detecting such devices, said Kozyulin. According to him, computer wars are becoming more and more reality.

Former commander of the Strategic Missile Forces Viktor Yesin notes that Americans today are ahead of everyone in this direction. Although at one time the USSR was a pioneer in the creation of unmanned aerial vehicles, but after the collapse of the Union, a very long pause arose, almost until 2008, there was no active development in this area. According to Esin, the use of UAVs must necessarily be regulated by international treaties. Attack drones are a completely new direction that can be a destabilizing factor in the military-strategic balance in the world. In the event that the world community cannot agree on any restriction on the use of such devices in the future, their destabilizing influence can only increase. The ability of these vehicles to conduct autonomous combat operations represents a great danger to stability in the world.

According to Esin, you need to accept the relevant documents. It is necessary that all states take appropriate measures, develop a legal framework for the use of these weapons. According to Victor Esin, the UAV is difficult to identify. Unlike aircraft, there are no identifying marks on them. If such a device worked against you, then against whom to respond? Yesin noted that as far as he knows, today terrorists are also interested in shock drones. 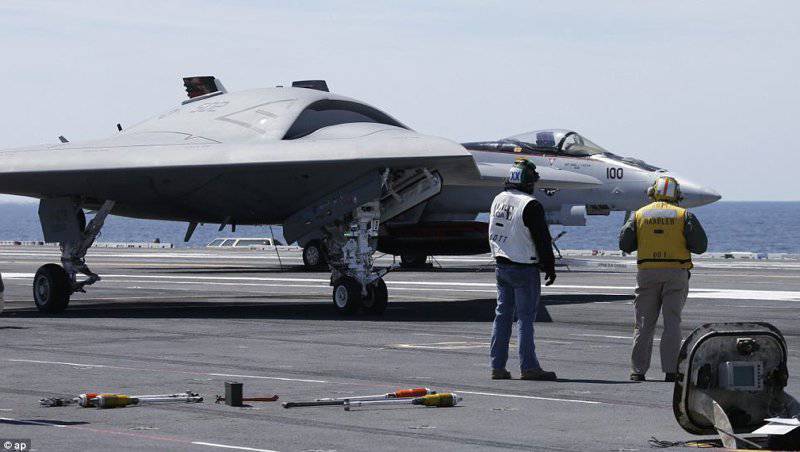 It is worth noting that in Russia, according to statements by the former Air Force commander Alexander Zelin, the creation of the first drone drone is expected only by 2020 year. Back in 2008, the Ministry of Defense of the country announced the start of a program to create modern samples of reconnaissance UAVs, 5 billion rubles were allocated for this purpose. But to execute this program immediately failed. None of the Russian UAV models presented under this program not only did not correspond to the technical assignment issued by the military, but did not pass the tests themselves. As a result, Russia was forced to purchase the necessary equipment, as well as a license to manufacture it from Israel.