17 May 2013
13
“It’s not enough to kill a Russian soldier, he must also be slain by the dead in order to pass where he was standing”
Frederick II

History Caucasian wars are full of heroic deeds, examples of courage, courage and honor. Unfortunately, these pages filled with blood, but imbued with the surprising courage of our ancestors, are almost forgotten in modern Russia. The wars in the Caucasus are more often remembered by the enemies of Russia and the Russian people, in order to talk about “Russian occupiers”, their “atrocities”, “prison of nations”, etc. But you can bring up these pages in the spirit of patriotism and masculinity, which is so lacking pampered, infantile Russian teenagers, generation after generation of patriots of Great Russia. To do this, on a regular basis, make movies, series, documentaries, organize various events for memorable dates. But our TV we see only endless series and films about "cops", gangsters, prostitutes, housewives and other modern "heroes". From historical films, perhaps they’re already familiar with Stalin’s “bloody tyrant”, they’ll remove another myth about the Great Patriotic War.

One of these exploits was accomplished by a Russian detachment under the command of Major Joseph Antonovich Montresor during the Russian-Persian war of 1804-1813, during the campaign of the 1804 of the year. In world history, this feat was compared to the act of 300 by the Spartans of Czar Leonid in the battle of Thermopylae. Montresor served in the Tiflis Infantry Regiment and was a staff officer who had high hopes in the future. But by this time he practically did not stand out among his comrades. In his life there was only one stellar and at the same time mortal hour, which immortalized his name. Few famous people from this moment rose to the level of legend, the hero of the Caucasian Wars.

Joseph Montresor was from a noble family, who led his descent from Claudius de Bourdale, Count de Montresor, whose son left the 18 century from France to the Rzeczpospolita. His great-grandson, Karl Lukyanovich Montresor (Karl-Vincent, 1786 — 1879), was a general from cavalry and was attached to the person of Tsar Alexander II. The genus Montresor was included in the genealogical books of the Kursk and Kiev provinces. In a sense, Montresor was Alexander Suvorov's godson. His father served in the Russian army for many years, and for some time he served in the office of the great Russian commander and was a friend of one of Suvorov’s most loyal people — Major, Greek Semyon Stavraka, who was adjutant to Alexander Vasilyevich. Montresor died in battle. Then Suvorov advised the Stavraki to adopt his three sons to the familyless (the mother also died). The commander assisted in the enrollment of children in a special educational institution - the Corps of foreign co-religionists. It was established by Empress Catherine II. This institution was necessary for the education in the Russian spirit of orphans - Armenians, Georgians and other ethnic groups. It was believed that they would be officials in the new areas of the empire. However, then the students of the Corps were sent to military service. Anton, Joseph and Semen Montresors, after training, became officers and parted forever.

Joseph Montresor received the rank of ensign, took part in the war with Turkey. The reputation of a sober and courageous man was fixed behind him. Even then, a young and promising officer noticed Tsitsianov. When Prince Tsitsianov in 1802, he was appointed governor of the Caucasus, he began to collect people with the permission of the emperor and took Montresor to himself. He was not mistaken in the choice. During the storming of the fortress city of Ganja, Captain Joseph Montresor, being the commander of the battalion of the Tiflis Musketeer Regiment, was one of the distinguished officers. He fearlessly led his soldiers who broke into the fortress. For this fight, Montresor was granted the rank of major. It was a very high rank for those days for an orphan, the more majors usually became already more experienced warriors who had more than one campaign and many fights and battles. And Joseph Montresor was then twenty with a little.

In July, 1804, the Russian troops besieging Erivan (Yerevan), felt a great shortage of food. The surroundings of the blockaded fortress were ravaged by the Persian troops, who had full advantage in cavalry. The Russian commander-in-chief of the Tsitsianov, in order to improve the supply of troops, gave the order to transport supplies from Tiflis to the closer Bombak. From Bombak, as necessary, food was already easier and faster to transport to Erivan. However, at the same time, Russian communications were cut. The Bombak province penetrated the Persian detachment under the leadership of the Georgian prince Alexander, whom the shah of Persia planned to put on the throne of Georgia and declared "king." This made the message of Tiflis with the Tsitsianov detachment dangerous.

The main city of Bombak province at that time was Karaklis, it was then important as an operating base in military operations against the Ottoman Empire and Persia. Therefore, Karasklis has always been the home base of a detachment of Russian troops, under the command of a reliable officer who was supposed to monitor the situation in the province. Prior to Tsitsianov’s campaign on Erivan, this post was occupied by Major Montresor, who was distinguished by his disposition and knew the situation in the region well. For these qualities, his commander in chief and took with him. In his place was placed Major Khadzhaev at the head of the battalion of the Saratov regiment. However, Khadzhaev did not cope with his mission in the current situation. He missed the favorable time for the transport of carts with supplies to Erivan, when there were no Persians on the lines of communication, and now he didn’t know what to do. And the path really became dangerous. The Georgian squad, which was sent from Erivani back to Georgia, was taken aback and partly captured.

Tsitsianov decided to replace Khadzhaev with Montresor, he was instructed to take all measures in order to open the communication with Tiflis and to deliver the transport from Karaklis to Erivan as soon as possible. In the squad of Montrezor there were 114 men with one cannon: 108 soldier-musketeers, 1 striker and 5 officers. It is clear that in such a situation it was better to send cavalry, it was more mobile. However, Tsitsianov had almost no cavalry by that time, only a couple of hundred Cossacks and Armenian volunteers who were guarding the approaches to the Russian forces. On the way, several Armenian volunteers joined the squad. The commander-in-chief ordered the major to pass dangerous places at night, as the Persians avoided night collisions. It was supposed to overcome the path in three days, the distance to Karaklis was a little more than one and a half hundred miles. The Montrezor squad left on the night of August 15.

But these precautions were in vain, after a few miles after leaving Tsitsiani forces, a detachment of Montresor near the gorge of the Aparan River (Aborani) met with the Persian cavalry, which constantly received reinforcements. The major decided not to retreat to the main forces, but to continue the movement, paving the way with bayonets. Neglecting the large number of enemy forces, Montresor continued to move along the mountain road for more than an miles more than 20. The Russian detachment passed the valley of the river Aboran in continuous skirmishes with the Persians, who tried to overturn the Russian system. The strength of the infantry was in unity, horsemen would easily have killed some soldiers. The musketeers bristled with bayonets in the square, and mowed down the enemy's cavalry during its attacks. Three supposed days before Karaklis turned into six days of continuous fights. Constant tension, heat and water shortage accompanied this path. There were no casualties in the detachment, since the Persians fired only from a distance, hoping for the speed of their horses and sabers.

Six days later, on August 21, the Russian soldiers descended from the mountains to the Bombak plain, where they found the main forces under the command of Georgian prince Alexander and the Persian commander, sarhang Mansur, who were moving from Karaklis. Almost at the settlement itself, the Persians surrounded the detachment of Montresor. Everyone understood that the situation was hopeless. Persians demanded surrender. The officers were offered to go to the service of the Persian Shah, promising a high position. The Russian major replied that "death prefers to shameful captivity." Georgian prince did not even believe such a response, sent a repeated proposal to add weaponbut will get the same answer. Alexander ordered “this Frenchman” to be taken alive in order to personally execute him for his stubbornness. The soldiers prepared for the last battle. The major offered the Armenians to leave, saying that there was no chance of victory, and freed them from the oath. But they refused, deciding to stand to the end.

Infuriated by this answer, the Georgian prince threw all his strength on the brave ones. This fight is not for life, but for death it lasted for several hours. The positions of the Russian detachment were located in the narrow part of the valley, this helped to repel enemy attacks, the Persians could not attack with all their might. The soldiers fiercely repelled the attacks of the Persians. Most of the squad died the death of the brave or was wounded, and the ammunition came to an end. Montresor, realizing that all the opportunities for defense were exhausted, threw off his uniform and turned to the fighters: “Guys! I am no longer your boss. Thank you for your courage and service. Now, anyone who wants can be saved! ”However, only one drummer followed his advice. According to another version, the major himself sent one soldier and a volunteer Armenian to the commander so that they could report what had happened to the detachment. The rest gave the last salvo and, together with the commander, rushed to bayonets at the enemy. The major himself fell by the cannon, his hacked body was found there, the lieutenant Vladislav Ladygin and warrant officers Anisim Cerets and Mikhail Vereshchago were next to him. Hardly injured 15 people were taken prisoner, one or two were saved, the rest died. Mansur, in deference to the courage of the enemy, allowed the Armenians from the nearby villages to bury those killed in the mass grave.

The Caucasian governor of Tsitsianov was deeply saddened by this news. When the Russian detachment returned from a campaign in Tiflis, he visited the grave of a brave commander and his comrades in arms. At the site of the death of Joseph Montrezor, his musketeers and volunteers, Russian troops stopped to honor their memory. The society of officers of the Tiflis regiment immortalized the place of the death of Russian soldiers in a modest obelisk, on which Tsitsianov wrote an epitaph: “Traveler, stop and respectfully take off your hat. Do not go indifferently by the light marble burial, which records the name of one hero, whose deeds will ensure the immortality of his memory. ” The earthquake of October 8, 1827, destroyed the obelisk. In 1837, a new memorial was erected at the direction of the Caucasian governor, Count Vorontsov. In 1918, it was destroyed, and it was restored in 60 years to the 150 anniversary of the accession of Armenia to the Russian state. 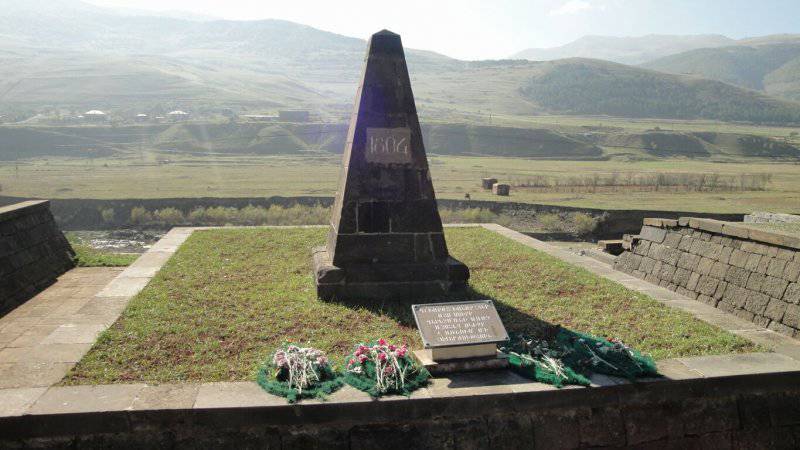