21 May 2013
25
Shortly after the start of mass production of heavy tank KV-1 leadership of the People’s Commissariat of Defense and the Council of People's Commissars decided to continue work in this direction and initiated several similar projects. The main goal of these works was to create a new heavy tank, the armament and protection of which would exceed the armor and gun of the existing KV-1. On June 17, 1940, a resolution of the Council of People's Commissars was issued, according to which in the coming months it was required to design and build four new tanks based on the KV-1, each of which would embody one of the selected concepts for the development of the heavy tank line.


From the Kirov plant they demanded to assemble two KV-1 tanks with thicker armor (1 millimeters) and different weapons - 90 and 76 caliber mm guns for 85 November. Later, by December 1, the plant had to make two tanks with even thicker 100-mm armor and the same set of weapons. It was assumed that the manufacture of four armored vehicles with different protection and different weapons will determine the most promising combination of armor and guns. Due to production reasons, only two new heavy tanks were compared. At the beginning of November, a few days late, the Kirovsky Plant completed the manufacture of a tank with 90-mm armor and an X-NUMX mm F-32 cannon. He received the designation T-76. The second tank, called T-150, left the workshop exactly one month later. He had armor 220 millimeters thick and F-100 gun caliber 30 mm.

Tank T-220, better known now under the name KV-220, was a modernized and modified KV-1. According to some data, in the military acceptance documents, the T-220 project also appeared under the name KV-220-1. The design of the new heavy tank in the main points consistent with the design of the original KV-1. In this case, the requirements for increasing the level of protection entailed changes in weight and size. The main plates of the welded armored hull (frontal parts, sides and stern) had a thickness of 100 millimeters. In addition, a pair of front plates was a bit thinner - 80 mm. The roof and the bottom of the armored base was made of sheets from 30 to 40 millimeters thick. When reinforcing the booking, the designers of the Leningrad Kirov Plant took into account the need to preserve the internal volumes of the armored hull. Therefore, the dimensions of the command and control, combat and engine compartment compartments remained the same, and the additional thickness of the armor affected only the external dimensions of the tank.

Calculations have shown that with a similar increase in booking, the tank will weigh up to 62-63 tons, which will require a new engine. To accommodate a more powerful engine, the armored case had to be extended by more than two meters, from 6675 to 8830 millimeters. The width at the same time increased slightly. The increased length of the hull was compensated by an additional support roller on each side and fourth supporting rollers. The design of the chassis has remained the same - road wheels with individual torsion bar suspension, steering wheel in front and leading rear.

To preserve the ride quality of the KV-220, at least at the level of the original KV-1, it was equipped with a new diesel engine. Instead of the old 500-horsepower engine, the KV-220 installed a new B-5 with horsepower 700. Thanks to the new engine, the power density of the tank remained at the level of the KV-1 - 11-12 hp. per ton. Speed ​​characteristics also remained the same - the maximum speed on the highway is at the level of 33-34 km / h and up to 20-22 km / h over rough terrain. The estimated cruising range of the KV-220 tank was 200 kilometers along the highway and up to 150 over rough terrain.

When developing a tower for a new tank, there were some difficulties. The breech dimensions of the X-NUMX-mm F-85 cannon did not allow it to fit into the dimensions of the original turret of the KV-30 tank. The use of the turret from the KV-1 tank, in turn, was considered inexpedient due to the not too favorable distribution of the internal space. Therefore, we had to design a new tower, the design of which used the best practices of the two previous projects. The hexagonal armored unit was significantly larger than the turret of the KV-2 tank, but much smaller than the KV-1 turret. The frontal parts of the turret had a thickness of 2 millimeters, the sides and the stern were 90 mm. According to the experience of the KV-75 tank on the KV-2 turret, an additional hatch on the stern armor sheet was provided for servicing the cannon and loading the ammunition. It is noteworthy that, thanks to a new tower, the KV-220 turned out to be about 220 centimeters lower than its predecessor KV-40. 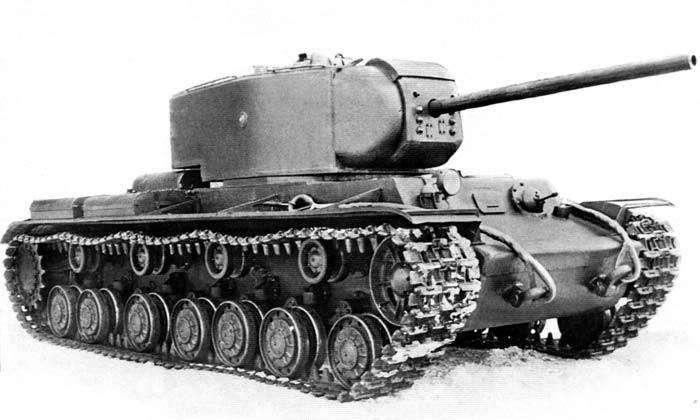 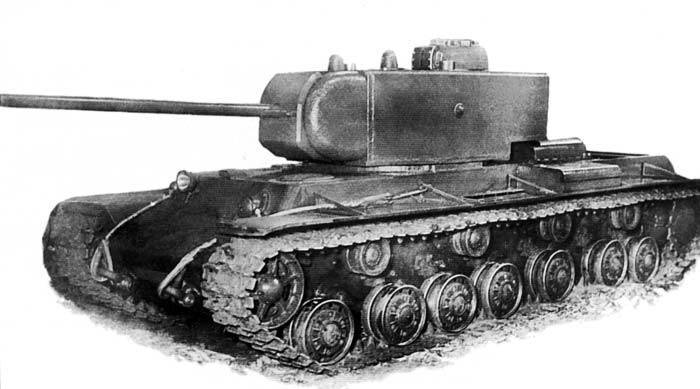 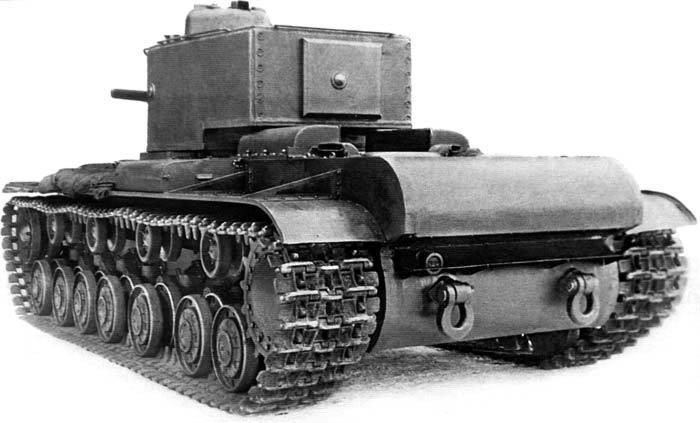 To aim and monitor the situation in the turret of the KV-220 tank, a PT-1 commander's panorama, a PT-6I periscope sight, and a TOD-6 telescopic sight were installed. The tank was equipped with an intercom and a radio station KRSTB, taking into account the possibility of using the 71-TK-3 station instead.

Inside the fighting compartment, we managed to place a 91 unitary projectile for the main gun. A single DT machine gun, caliber 85 mm, was paired with a 7,62-mm cannon. Two more same machine guns were placed on the turret of the commander's turret and in a ball mount on the front hull plate. Total ammunition of all three machine guns - 4032 cartridge (64 disc magazine). When operating in the army, it was supposed to give the crew submachine guns for self-defense. The crew composition of the KV-220 tank corresponded to the crew of the KV-2: driver, gunner, commander, loader and his assistant.

In January, the 1941, an experienced KV-220 tank, was ready for testing. However, on the last day of this month, during the first exit to the landfill, an engine crash occurred, which shifted the test schedule. After repairs, during the first few months a prototype of a new heavy tank could only make trips around the landfill and demonstrate its driving performance. As it turned out at the very beginning of the tests, the F-30 gun was not ready for fire tests. And the gun itself, and its suspension devices needed refinement, which took a lot of time.

It is worth noting that an experienced KV-220 tank didn’t get a cannon ready for firing as a result. Work on the tool was delayed until the spring of 41, and by that time the design office of VG Grabina received several more priority tasks. After the KV-220 showed all its capabilities except for combat, it was decided to use it in the KV-3 project. In order to test the possibility of using the existing technical solutions on new heavy tanks of even greater mass, an experienced KV-220 was equipped with additional cargo. The 70-ton machine (approximate combat mass of the prospective KV-3) overcame 1300 kilometers, but the testers were not happy. The reloaded tank became less mobile, and serious problems appeared in the undercarriage design. For example, the engine had to be operated almost all the time at maximum modes, while torsion bars and suspension balancers gradually deformed under the weight of the machine.

20 May 1941, the KV-220 tank was sent for repair. In the course of these works, damaged chassis parts were replaced, and a new engine was installed. The B-2CH diesel engine, equipped with supercharging, had 850 horsepower. and because of this, the tank improved its driving performance slightly. In the last days of May, the KV-220 left the repair shop and again went to the landfill. For the remaining three weeks before the war, the updated armored vehicle traveled more than five hundred kilometers. As for the gun, it was not ready in June 41-th.

After the start of World War II, the experienced KV-220 tank remained at the Kirov factory. In the first months of the war, all the prototype tanks available at the factory were used in various tests. By the beginning of October, the production rates of tanks at the plant had dropped significantly on 41, and therefore the management of the company and the design bureau decided to send unnecessary prototypes to the front. Due to the lack of a ready-made F-30 cannon, during repair, the KV-220 removed the turret and replaced the armored unit from the KV-1 serial tank with the appropriate weaponry.

5 October 1941, the only KV-220, equipped with a tower from the KV-1, went to the 124-th tank brigade. The further fate of the armored vehicle is difficult to track. A number of sources cite memories of a company commander from the D.I. brigade. Osadchy, however, from the words of the tanker, it is impossible to establish exactly which of the converted prototypes is meant. So, Osadchy speaks of the tank’s combat mass over 100 tons, which none of the tanks sent to the front had. From other words of the former commander, it is also impossible to draw certain conclusions. According to Osadchy, it is known that one of the prototypes of heavy tanks with the inscription “For the Motherland!” On the tower was destroyed by the enemy in December 41. Apparently, because of the detonation of the ammunition, the entire crew died, and a tower flew from the tank. Precise data on the further fate of the other two experimental machines that went to the front are not available.

Now it is difficult to say how successful the KV-220 project was. For his time, he had a very good defense and a weapon of sufficient power. The only copy of the KV-220 tank was obviously destroyed by heavy field artillery fire, not by tank guns, which makes it possible to draw appropriate conclusions about its level of protection. In the context of the KV-220 project, the situation with the creation of the F-30 gun looks the worst. As practice later showed, a millimeter 85 caliber cannon proved to be quite an effective means for defeating medium tanks and enemy fortifications. Later, however, with the emergence of a large number of German heavy tanks, more powerful guns were required.

Probably, the chassis of the KV-220 tank could carry a new turret with a larger-caliber gun, and the characteristics of this car as a whole look quite interesting. However, at the start of the war, the Soviet Union was not in the mood for fine-tuning heavy tank projects. Therefore, the KV-220 and its two "brothers" based on the same KV-1 (T-150 and KV-3) never reached mass production, remaining at the stage of testing and forced combat use of prototypes.