Stalin is not on them. Russian national hockey team crashed out of the World Cup 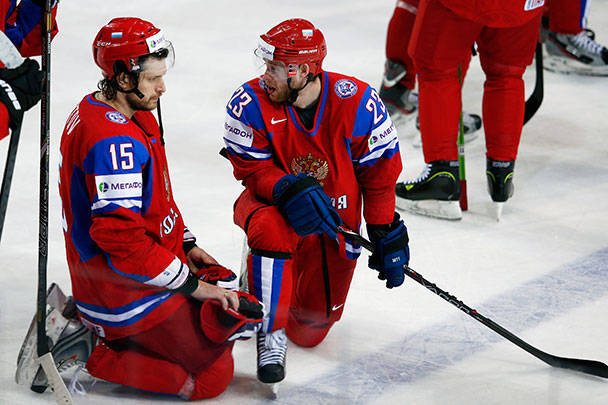 In the first match of the playoffs, Zinetuly Bilyaletdinov's wards surrendered to the US national team. Our team did not show the games, and goalkeeper Ilya Bryzgalov, who had become famous on the eve of a scandalous interview about Stalin, missed four goals and was replaced in the second period. Semen Varlamov, who entered the field, limited himself to the same number of goals.

The Russian national team on Thursday lost to the Americans with an 3 score: 8 and left the world hockey championship.

Nobody expected such a defeat. The sediment that remained after the game is in many ways more important than the match itself, which the Russians had as bad as possible.

In the playoffs, the team came from second place, showing in the qualifying tournament of the championship a good, albeit uneven game.
The unexpected defeat of the last-last-rank line in the table of the French team and the poorly conducted game with the Finns were compensated by strong victories over the Americans and the Slovaks.

In general, the second in the tournament match with the young US team, the Russian team came up in good spirits. Hockey players actively gave out interviews, and forward Alexander Ovechkin, who plays for the Washington Capitals, joined the team the day before.

Among the replicas of how the national team is going to beat the Americans, an interview with goalkeeper of the Russian national team Ilya Bryzgalov, who said that he positively assesses the reign of Joseph Stalin, looked unexpectedly.

“I see the logic in his actions,” said the goalkeeper in an interview with the journalist Championat.com. - Not without kinking, of course. But he came to power in a country that only survived the revolution. How many there were spies, enemies, traitors.

Many people after the Civil War remained in the hands weapon. The country was devastated, it was necessary to somehow survive. It was necessary to build a country, and in order to do this, we must hold it in iron hands. Then the war began. How many people returned after her graduation from the front, again with weapons. Around the devastation, it is necessary to restore the country, to maintain defense. How many criminal elements were there. ”
“He knew what he was doing. They say about him: a bloody tyrant, but at that time it was impossible to do otherwise. Yes, there were innocent people among the victims of repression ... But this happens.

Just recently, in the US, a man who served 45 for years has been released from prison. It turned out that he was innocent. Imagine, a person served his whole life for what he did not commit, ”Bryzgalov explained his thought that he would like to talk with the leader.

The interview was removed from the site, but left in search cache.

Time to miss the pucks

Ilya Bryzgalov left for the match in the starting lineup and missed the first puck in the 12 minute of the game. After Craig Smith beat Eugene Biryukov, striker Paul Stastny, being on the patch, easily beat the goalkeeper of the Russian team.

After 50 seconds, TJ Oshi threw from an acute angle, and in this episode Bryzgalov found it difficult to blame the defenders (they held the whole game out of hand, but so far no one could guess how everything turned out).

The Russian team played in three minutes: Alexander Svitov, after Sergei Soin's pass, struck John Gibson, and ours went to the break with good chances. The statistics of the first period were on the side of the wards of Bilyaletdinov: the Russians threw ten shots on the opponent's goal, the Americans limited themselves to eight.

The Russian national team began the second period in the majority, which was never realized. Alexander Ovechkin looked great, did not hesitate to throw at the goal, our main scorer Ilya Kovalchuk looked good, but the Americans spent a better part of the game on oncoming courses.

On the 26 minute, with Ryan Carter's submission, Nate Thompson put the puck into Bryzgalov’s goal net, and Alex Galchenyuk excelled on 38: in both cases, the defenders were mistaken, first skipping the US counterattack and then leaving the goalkeeper alone.

Between these goals, our team managed to carry out several attacks: the same Ovechkin and Yevgeny Kuznetsov dangerously beat the goal, but the defense and the goalkeeper of the Americans played out each episode very calmly and harmoniously.

Bilyaletdinov replaced Bryzgalov with Semyon Varlamov, and with the 4: 1 score in favor of the US team, the national teams left to rest.

Hope to the Russian team gave at the beginning of the third period, Ovechkin, who passed from an acute angle so that the puck, quite unexpectedly for everyone, was in the net of the Gibson goal.

After this goal, our team could cheer up, the opportunity to recoup remained and the prospects opened up the most optimistic, but in the 43 minute Ryan Carter scored, although the Americans were in the minority and the puck was more likely to hold.

It seems that at that very moment the Russians finally got angry and carried out several sharp attacks. One of them ended with a goal (Alexander Perezhogin scored), the second could turn the tide of the game, but from the most advantageous position did not get on goal Soin.

The final match turned out to be depressing: the Russians did not go forward, they raspasovyvalis, and the Americans quietly kept the puck and brought the game to a logical final. The score could be 3: 9, but Varlamov, three minutes before the end of the third period, saved the team from absolutely indecent defeat.

However, the numbers on the post-match scoreboard could hardly have pleased any of the Russian team fans. The most common comments of the spectators leaving the stands were “this is a nightmare” and “this is horror”, the other statements of the VIEW newspaper cannot be quoted because of the legislative ban on obscene language.

Ilya Kovalchuk, quoted by Championat.com, also could not resist harsh expressions. "We are overdue ... and", "said the striker.
The head coach of the US team, in turn, noted that he was proud of his hockey players. Joe Sacco admitted that "this is a great victory for his team against such a strong contender."

“We started the match well, our goalkeeper confidently acted at the start, made great saves. On the active actions of the Russians, we were able to respond with two goals. And to lead against such a rival in the score is very important. I am proud of my hockey game. We used our chances. For most of the match, we defended well against powerful Russian strikers. We acted diligently, in a disciplined way, and now we are glad that we are going to Sweden - for the sake of it we flew here. We will fight for medals, ”he concluded.

Stalin, about whom Ilya Bryzgalov mentioned so out of place, was not forgotten after the match.

“It comes to the mind of a supporter of the 'iron order', where he would now be if his beloved watched his game today historical a character, ”journalist Elena Zelinskaya sadly specified in her blog.

In a wider context, the defeat of the national team included the Minister of Culture Vladimir Medinsky, who regretted that "Tarasov and Tikhonov ... clearly not enough."

Not without the participation of the administration of Medinsky on the screens of Russian cinemas in April came the film “Legend - No. 17”, which tells how the great Soviet coach Anatoly Tarasov quite Stalinist (and clearly not without sympathy for the leader) leads to the victory of the rising star Name Valery Kharlamov.

The Russian national team in February to defend the honor of the flag at the Olympic Games in Sochi. Judging by the game, the team will have to change, if not all, very much.

Whether it comes to the Stalinist methods is perhaps the only question so far.