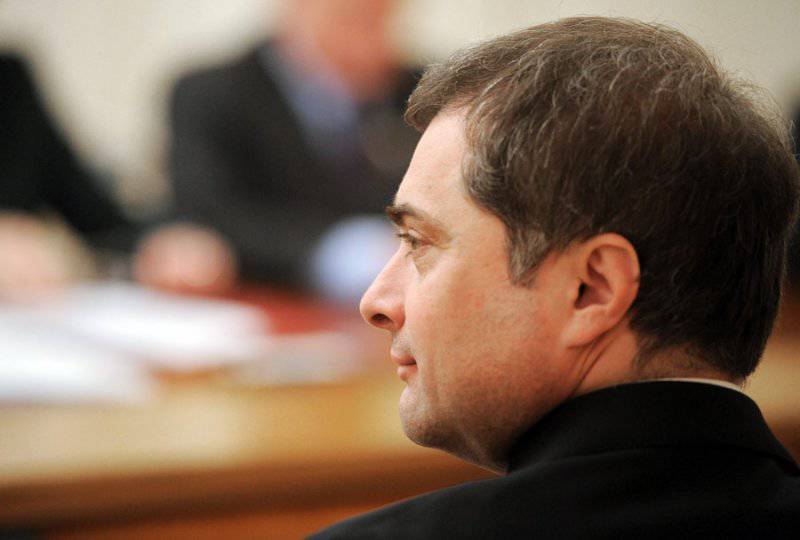 One of these questions can be formulated as follows: the current Russian government no longer needs Surkov as a generator of ideas for the formation of the foreign policy that has been built up in the state in recent years (the post-Yeltsin era)? It is noteworthy that it is precisely this issue that causes a rather intense controversy in the foreign press, which could not fail to respond to the resignation of Vladislav Surkov from the post of head of the government administration staff of Russia.

For example, according to the Financial Times publication, which also refers to representatives of Russian liberal forces, the Kremlin no longer needs “gray cardinals.” The point of the FT idea is that if earlier Vladimir Putin was forced to resort to a certain veiling of the administration of domestic policy, then after the third election to the presidency, he is ready for tougher and more irreconcilable actions. They say that if before the head of state needed such a person as Vladislav Surkov in order to conduct a kind of casting for the role of suitable managers, then today (as the Financial Times believes) Putin decided to work in this direction on his own. And also independently, in the opinion of the same publication, to put pressure on the opposition.

But if you say that Vladimir Putin no longer needs the services of Vladislav Surkov as a political consultant, as a generator of ideas for the administration of domestic politics, then you need to mentally return a little while ago. In all likelihood, the star of Surkov, precisely as the “gray cardinal” of Russian politics, as the same Western publications called him at one time, began to fade in the last year of Dmitry Medvedev’s presidency. The political and near-political controversy began to manifest itself in 2011-2012 years so actively that the very concept of "sovereign democracy", which Vladislav Surkov gave birth to the world began to sway. Someone at the same time said that, he says, it is Surkov himself who is carrying out the “control rocking of the boat” in order to further verify the strength of the vertical of power built on this very “boat”, and someone said that the Surkov mechanism itself failed and that the political system may collapse if it does not begin to replace one support with another.

We draw attention to the fact that Vladislav Surkov was working as deputy (first deputy) head of the presidential administration from August 1999 of the year (as you know, the country was still headed by Boris Yeltsin) to December 2011 of the year. In December, 2011, when the largest protest actions in recent years appeared in Russia, Surkov was redirected to work at the Government. Then the government was headed by Vladimir Putin. Why such a move with Surkov was undertaken at that time? There is an opinion on this score that Putin withdrew Surkov from the presidential administration in order to prepare the necessary basis for obtaining an opportunity to run for a third term, and at the same time carry out preliminary personnel work on the composition of the future government, taking into account the attacks that were undertaken by the so-called dissenters . If this is actually the case, then Surkov seems to have coped with his obligations. It seems to be ... But after the presidential election and the personnel selection of candidates for the government, Surkov himself remained in the government. One gets the impression that Vladislav Yuryevich (and not Dmitry Anatolyevich) was determined to be responsible for the work of the Government of the Russian Federation, formed in May 2012 of the year. They say that Vladislav Yuryevich, since you are a political consultant and the “father of the current political system,” so is your demand.

And in fact, it turns out that it was Surkov for everything, to put it mildly, the flaws of the government and answered. According to official sources, he himself wrote a statement asking for his release from 26 in April of this year. What is April 26 2013? This is “tomorrow” from the day of the direct line with President Putin, on which the head of state was criticized for the fact that with the frankly unintelligible work of many government officials, these same officials still occupy their high posts. Then (during the line) the president declared that the Government was working only one year - time, they say, is not enough to show himself, but apparently, at the same time, he already dialed Vladislav Surkov’s phone number in his mind in order to say that he (Putin ) the government, let's say, covered up, but now it is necessary to make organizational conclusions in the government itself. It was after this that Vladislav Yuryevich suddenly showed “his own desire” to leave the post of the head of the government apparatus.

His opinion on the resignation of Vladislav Surkov is a member of the Union of Journalists, a public and political figure Alexander Sevastyanov, who at one time was the co-chairman of the NDPR (National Sovereign Party of Russia). He believes that one of the reasons for Surkov’s resignation is his pathological unwillingness to take into account the presence of Russian political elites in Russia, which could become a support for the authorities. Sevastyanov is sure that it was at the suggestion of Vladislav Surkov in the Russian Federation that the Russian political elites were finally turned into illegal circles, which were denied the opportunity to defend the interests of 80% of the population, that is, the Russian people. Sevastyanov reminds Surkov of the fact that it was precisely because of the implementation of his domestic political paradigm that the Russian national political forces were forced in December 2011 of the year to go to Bolotnaya Square, joining the movement of the so-called dissenters. And the same Alexander Sevastyanov expressed the idea that the resignation of Surkov allegedly made it clear that the current government was going to turn to face the most numerous nation in Russia.

It is clear that Alexander Sevastyanov expresses his, let's say, painful, because in 2003, the Ministry of Justice of the Russian Federation headed by him, the National-State Party, deprived of registration, and from the second attempt. And, probably, Sevastyanov, retired Vladislav Surkov, wants to see what is warming his soul. But, frankly, the likelihood of the connection of Surkov’s resignation with a possible revision of the national policy of the current authorities headed by Vladimir Putin seems to be minimal.

Much more likely factor (one of the factors) of the resignation of Vladislav Surkov is quite a significant decrease in the rating of the Russian authorities and, especially, the rating of the Cabinet of Ministers. It is noteworthy that the drop in the rating is not connected at all with the position of Bolotnaya activists and their supporters, but with the fact that many Russians who have been loyal to the government all this time were somewhat disappointed with its current somewhat unintelligible policy. Not that they were waiting for a spectacular leap in the economy and the fight against corruption, but at least they were hoping for real things. So far we have received a well-looked through imitation and a clear delay in the beginning of this work. And if they continue to imitate, then neither Surkov, nor anyone else will help ... I had to be tied up with imitation.

So, it turns out? President Putin's resignation of Surkov makes it clear that he is really ready to go on direct rule in the conditions of emerging stagnation - without the use of technologists, PR-managers and other "gray cardinals"? If so, then the Russian bureaucratic system, along with its bureaucratic content, now obviously takes a wait and see attitude. Like, you need to wait a bit: will the president go by the heads of those who frankly merge all state work for the sake of personal interests, or will everything settle down again.

Frankly, well, I really would not want it to settle down or even, say, get lost. I would like the resignations being conducted to be also a pre-emption of the failure of others - a sort of Damocles sword that would hang and tickle the bureaucratic top. Will it tickle? .. Or even the spirit of the apparatchik Surkov will make its own adjustments? Questions ... Questions ...

Ctrl Enter
Noticed a mistake Highlight text and press. Ctrl + Enter
We are
New sharp turns in the case of Oboronservis: agenda for Anatoly Serdyukov
50 comments
Information
Dear reader, to leave comments on the publication, you must to register.