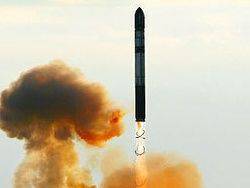 The development of an updated version of the PC-20 “Voevoda” (“Satan” in the NATO classification) heavy ballistic missile contradicts disarmament logic, is environmentally unsafe and does not correspond to the current course of modernization, warns the designer of the Bulava and Topol-M rockets.

About last year's development of heavy fuel oil missiles of a new type were told last week by the general director of the Rosobschemash corporation Arthur Usenkov.

According to him, the new missile, which may appear in eight years, will be able to overcome any existing and prospective missile defense system.

Like the "Satan", the new missile, while not having a name, will carry a separable warhead of ten nuclear warheads.

Yuri Solomonov, the general designer of the Rosobschemash competitor, the Moscow Institute of Thermal Engineering (MIT), urges not to hurry and limit it to draft works, "and then look at the specific situation."

According to the designer, the Bulava, which has not yet been put into service, will not only not reduce the technological gap with other countries, but also make the gap irreplaceable.

Solomonov, last year after several unsuccessful launches of the Bulava, voluntarily retiring from his post as head of the MIT, also believes that the development of a heavy rocket of a new type contradicts disarmament logic and harms the environment.

Heavy missiles use "poisonous components," which, in his opinion, "is unacceptable in missile complexes of the 21st century."

"Flight tests of complexes, which, in fact, are toxic substances and will pollute the environment - akin to man-hatred," said Solomonov.

Experts note the psychological significance of such weapons, but doubt whether there is enough resources to create a new rocket.

"The issue of a heavy strategic missile is very difficult. On the one hand, such missiles have exhausted themselves. Today there is no need to have 10 warheads with a capacity of one megaton each. For solving military tasks, such capacities are excessive. They cannot be used, as this will lead to an enormous ecological disaster There is no financial, military or economic sense to create such missiles. On the other hand, the presence of such missiles has psychological significance. They seriously warn a possible aggressor about the destroyer awn retaliation ", - said bbcrussian.com executive editor of" Independent Military Review "Viktor Litovkin.

According to the expert, if the United States refuses to ratify the START treaty and the arms race begins, heavy missiles can play a deterrent role, but they will never be used.

"There is, of course, the interest of Solomonov as a developer of solid-fuel missiles. But the question is that today you can make miniature nuclear warheads - 50-150 kilotons of power. They are capable of solving the same tasks that megaton warheads solve. Especially if we are talking about military tasks, not fighting civilians, destroying cities, etc. In Solomon’s position, there is a desire to compete, but, on the other hand, a sensible, rational approach, ”the expert believes.