Oppositional cannibal: an eye for an eye 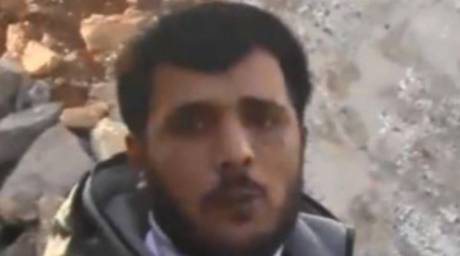 Already the entire Internet has bypassed a terrible video in which the field commander of the Syrian "rebels" bites off the human heart, after cutting it out of the body of a dead government soldier. “By Allah, we will eat your hearts, you, soldiers of Bashar! You are dogs! Allah is great! Heroes of Baba Amr! We will rip their hearts out to eat them ", - quotes "Sight" With reference to the American channel CNN, the words of a feral oppositionist.


No one thinks it's a joke or a fake. Even the “rebels” themselves do not doubt the authenticity of the cadres, although they are publicly denying mass cannibalism. A spokesman for the opposition confirmed that the footage posted on the Internet was genuine, and then stated that the incident was an isolated incident.

“This is not an ordinary man in the street who sits at home. He was killed by two brothers, his mother and father were detained, and the rest of the family are among the displaced persons, ”said a spokesman for the opposition.

Referring to the information of the authoritative American journal Foreign Policy, "Lenta.ru" gives the name and position of a heartthrob: this is the commander of the "Brigade of Omar al-Faruk" Abu Sakkar. “The Foreign Policy” indicates that the record shows how Abu Sakkar cuts a heart and a liver from a fallen soldier of a government army, and then eats them. Moreover, he advises his comrades to follow his example.

As the American edition notes, earlier Sakkar fought in the ranks of a large insurgent organization in Homs, but was later expelled from there and organized his own unit, fighting for Quseir, located on the border with Lebanon.

US State Department spokesman Patrick Ventrell told reporters that Washington brought to the attention of the Syrian opposition its concern over the video that appeared cannibal.

“We are shocked by this video,” he said. correspondent ITAR-TASS Andrey Surzhansky. “We clearly state that all parties to the conflict (in Syria) must follow international humanitarian law.”

Do not approve of cannibalism and human rights defenders from the "Human Rights Watch". As Igor Subbotin points out ("MK"), in this international organization, they were indignant and declared that such a matter was a war crime. At the same time, human rights activists said that all those who participated in the shooting should be held accountable to the International Criminal Court. “A mockery of the body of a military man is a crime,” they noted in the organization, “but it seems to be more terrible that a quick fall into sectarian rhetoric and violence”.

As the Azatunyun Radio, The United Nations condemned the video in which a rebel bites the heart of a dead soldier in the regular army. UN High Commissioner for Human Rights, Navi Pillay, called the rebel’s actions a “war crime.” She called on Syrian opposition to investigate the incident, as well as other alleged violations by the rebels, including cases of torture and unauthorized executions.

Syrian opposition National Coalition also condemned the video, stating that the perpetrator would be punished.

The international press receives coverage of only a small fraction of such video materials. What their authors do is related not to politics and not to war, but to psychopathology. This opinion was expressed by the teacher of the Amman University Basyl al-Hamad.

The identity of the “hero” video has long been known, he says. This is Abu Sakkar, one of the founders and commanders of a fairly large rebel detachment. This squad and others like him post such videos and photos all the time.

The one who commits such acts, and even shoots them on camera, the psychologist thinks, does it because of his life offenses and failures. These are people who were unable to self-actualize and now prove to themselves and others that they have self-actualized in the killings. They seem to declare: "You did not want to notice me, but now you will not be able to overlook me, because I am more significant than you, I am stronger than you."

In fact, they are very vulnerable and mentally defective people.

“The other side of the matter is that these morally and mentally flawed people are just cogs in a large mechanism that was not invented by them; they would not be able to do that. I looked at the professional need for much more such videos than I would like. And you know, there are some similarities in them, there is some kind of direction. They were taken off as if with an inept hand - but in reality everything was done very professionally. In addition to the helpless victim and the "superman" murderer, there is always a reporter joker in these videos. His voice is heard with salty jokes, designed to make these videos acceptable for perception with such a psychologically verified counterpoint. And this reasonableness makes their videos even more terrible from a moral point of view. ”

The psychologist believes that such cruel antics both on a personal and social level are usual revenge. "Revenge of the population of the whole of Syria, which was one of the most socially prosperous Arab countries before the conflict." The main goal of the "avengers" - to bring fear to people.

Igor Subbotin ("MK") cites the opinion of the medical examiner who, at the request of Time journalists, has studied the video. He stated that the thriller did not eat the heart, but the lungs. In addition, Abu Sakkar said in an interview that he has an even more shocking video in which he saws the corpse of a fighter of one of Bashar Assad’s friendly military formations.

In the West, they write the following on the shocking topic of cannibalism.

Kim Sengupta ("The Belfast Telegraph") says that Abu Sakkar, the man who introduced cannibalism into the Syrian civil war, until recently was a kind of hero who defended Baba Amr during the onslaught of the forces of Assad.

Moreover, the activity of his “Omar Al-Faruk Brigade” was approved for speaking out against Islamic extremists who were joining the ranks of the rebels (the latter is causing more and more concern among Western governments). Saqqar's people arrested and executed commander Mohammed al-Absi, the leader of a group of foreign jihadists who was suspected of abducting a British photographer and was associated with the terrorist organization Dzhebhat al-Nusra.

The author of the material spent some time with the Al-Farouk fighters in Syria. In his opinion, these are not savages calling for a medieval caliphate or ready to swear al-Qaeda allegiance. In a number of cases, they sincerely talked about the problems that the country would face after the overthrow of Assad, about how difficult it would be to repair the cracks that had arisen between rival communities.

Khalid al-Hamad (Abu Sakkar is his pseudonym) was not always a bloodthirsty man prone to violence. People from Baba Amr remember his participation in marches in the very first days of the protests. He spoke of a split among the opposition and stated the need to create a united front for reform.

In his public speeches, he claims that the phone of a dead soldier contained a video in which this soldier humiliated a naked woman and her two daughters. “You do not see what we see,” al-Hamad says, “and you do not live where we live.” Where are my brothers, my friends, girls from my area who were raped? May God bless them all. ”

Haytham Mohammed Nasr, a former Al-Farouk fighter who is now in Turkey, acknowledged that the video had an extremely destructive effect on the opposition’s cause, but insisted that it should be understood in the context of the crimes committed by Shabiha - pro-government forces Alawite police. Nasr believes that the video was conceived as a warning to Shabihi.

John Hall («The Independent») writes that the Free Syrian Army promised to hunt down the rebel commander and cannibal Abu Saqqara and severely punish him. In a special statement, the leadership of the FSA noted that any such action is contrary to those values ​​for which the Syrian people paid for their assertion with their blood. The abuser will be severely punished, noted further, even if he is associated with the Free Syrian Army.

A British correspondent cites the words of Saqqara, spoken by him in his defense. Cannibal has admitted that his cruelty is associated with a fundamental belief in the principle of an eye for an eye.

Also in the newspaper it is noted that the heart was eaten not by the heart, but by the liver (according to Time magazine). Sakkar himself admits that the organ he removed was a human lung, which was confirmed later by a surgeon who reviewed the footage.

According to some other Western media reports, the Free Syrian Army allegedly gave the order to take Sakkara alive or dead. Also in Western newspapers referring to the statements of various Syrian rebels, you can read that in those areas where the cannibal division operates, the Assad forces or Shabiha troops loyal to him are now afraid to turn around.

Observed and translated by Oleg Chuvakin
- especially for topwar.ru
Ctrl Enter
Noticed a mistake Highlight text and press. Ctrl + Enter
We are
Without a face. Ordinary Nazism, ordinary fascismGeopolitical mosaic: Syrian opposition leader Abu Sakkar called for cannibalism, and three hundred percent of voters came to vote in Pakistan
96 comments
Information
Dear reader, to leave comments on the publication, you must to register.