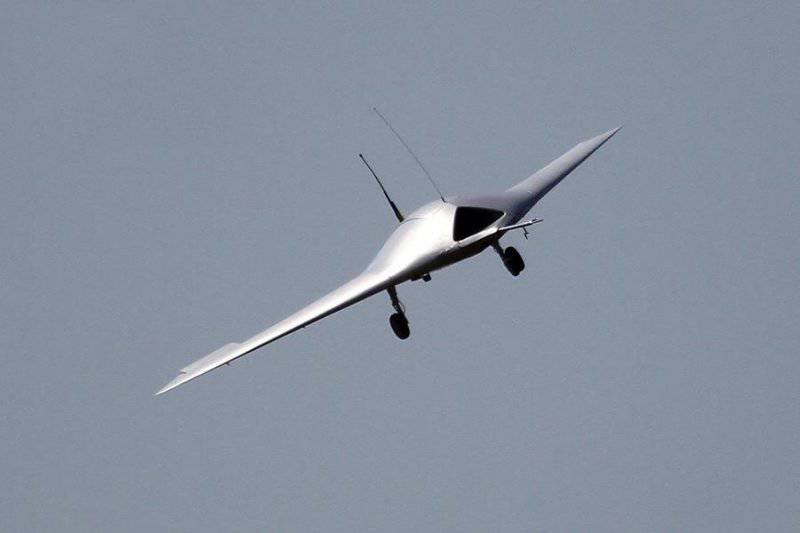 Once again, the People’s Liberation Army of China (PLA), with the help of military hardware fans, conducted an informal demonstration of its new weapons - UAV using stealth technology.


China continues ground testing of its newest stealth technology drone, Lijiang, which means Sharp Sword. As is the case with other new products aviation military equipment, his first photographs appeared long before the official presentation at the Chinese military forums. In early May, only low-quality photographs of the new aircraft were published, by which it was possible to judge only about its shape, but on May 14, better pictures appeared, on which you can see the details of the Lijiang.
In the amateur video posted on YouTube, the latest photos are not.

It is worth noting that the secrecy around the Chinese program and the similar appearance of various UAVs have already led to confusion. For example, in the video, the first frame is not the “Sharp Sword”, but the combat drone Dassault Neuron created in France, which made its first flight in December 2012 of the year.

In addition, many journalists are literally entangled in Chinese drones: at the same time as the Lijiang, the Chinese air force is also experiencing the And Lun, a drone that looks and looks like the American MQ-1 Reaper drone. Yi Lun made its first flight in 2012, and its project is not related to Lijiang, which is being created by Hongdu Aviation Industry Group and Shenyang Aviation Corporation. According to Chinese media reports, the project was launched in the 2009 year, and its first ground tests passed in December of the 2012 year.

The first fuzzy photos of the Acute Month, by which it was impossible even to understand its appearance, appeared in February 2013 of the year, but now there was already a leak of high-quality images, which can reliably estimate the size of the device and distinguish the numbers on the case.

The Chinese side did not publish any technical characteristics: previously, a video with three-dimensional animation appeared on the Internet, from which it can be understood that the Lijian is being designed as a sea-based UAV. It is shown how he takes off and lands on a conditional aircraft carrier (it does not look like Liaonin, the former Varyag TAVKR, which is in service with the PLA) at the 1 mark: the drone launches a missile that hits the American anti-aircraft system Patriot.

Also on the Internet appeared approximate drawings of the Chinese drone, according to which it can carry up to 4 missiles in two internal compartments, but the accuracy of the figure is questionable. In any case, one can hardly expect that in the coming years, the Sharp Sword will be tested at Liaoning - while China is busy landing conventional fighters on them.

If China can lift its stealth drone into the air, it will take the fourth place in the lineup to experience this technology. Currently, invisible drones are produced by the US (for example, X-47 on the eve of the first time took off from an aircraft carrier), the EU (Dassault Neuron) and Russia (MiG Skat Project and others currently under development).

It remains to be noted that once again, the PLA organizes a “presentation” of its equipment with the help of Chinese enthusiasts who “accidentally” take pictures of secret news and publish photos on specialized forums. That is how the photos of two prototypes of stealth fighters became available to the public: J-31 and J-20.

As observers from The Pacific Standard magazine suggest, the Chinese military skillfully use especially trusted Internet users, but not only as a propaganda tool, but also to demonstrate openness to the world community, remaining in practice one of the most closed and secret armies in the world.

Ctrl Enter
Noticed a mistake Highlight text and press. Ctrl + Enter
We are
Demonstration show "Interpoliteh" will be interesting noveltiesNew photos of the Chinese fighter Chengdu J-20
22 comments
Information
Dear reader, to leave comments on the publication, you must to register.